Kerris Dorsey On "Alexander" and "Best Worst Day Ever"!

Kerris Dorsey plays the role of Emily Cooper in the upcoming Disney film Alexander and the Terrible, Horrible, No Good, Very Bad Day. She's also a musical artist and, together with her sister, Justine, penned the amazing track "Best Worst Day Ever" for the film's soundtrack! 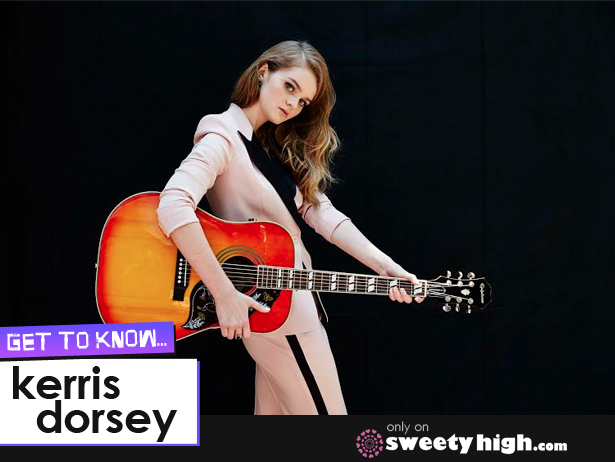 The songwriting process began when, out of the blue, Alexander director Miguel Arteta contacted Kerris with a request.

"He said, 'I know you're a writer and that you play music, and I would really love, if you wanted to, to write a song for the movie,'" she explained.

Kerris was happy to oblige! When Miguel asked if Kerris's very talented sister, Justine, would want to help, Justine was also quick to sign on.

Together, Justine and Kerris had just five days to put together a great track.

"We sat down and thought about ideas, and one day I was watching the trailer for the movie," Kerris said. "One of the tag lines is 'Get ready for the best worst day ever,' and I thought that was just a super clever, fun title, so we used that as the basis of the song."

The duo also managed to finish the song within their strict time limit, composing a fresh, upbeat, folksy song with a rock beat that lends the perfect tone to the movie's soundtrack.

Kerris's sister Justine also got to join in for the making of the music video for "Best Worst Day Ever."  The video, which took two days to shoot, features a bunch of great clips from the film.

"We had a ton of fun that day," Kerris said. "It's like a girl's dream to have a tea party and get to sing along to a song you wrote in a music video. By the end of the day, no one could stop singing that song because it was on repeat, on repeat, on repeat."

Kerris enjoyed the experience even more because she got to share it with her sister.

"I love doing basically anything with Justine," she said. "She's my sister as well as my best friend."

You can hear the track in Alexander and the Terrible Horrible, No Good, Very Bad Day, which releases October 10!

For even more great music from Justine and Kerris Dorsey, check out their websites at www.justinedorsey.com and www.kerrisdorsey.com.

"My sister is amazing and she's got really good music," Kerris said. "She's working on her album, so people should check her out because she is so good she's so talented."

Stay tuned at Sweety High for another interview with Kerris on Alexander and the Terrible Horrible, No Good, Very Bad Day, plus Kerris's personal soundtrack for the movie and our SBTV coverage of Alexander!