Salem the cat is perhaps the cutest character on Netflix's Chilling Adventures of Sabrina, but Kiernan Shipka would rather not be around him.

Kiernan's teen witch character has to spend a lot of time with the furry creature, and that has taught her something unfortunate: It turns out she's allergic to cats. The actress opened up on Late Night with Seth Meyers about the problems that has caused for her. 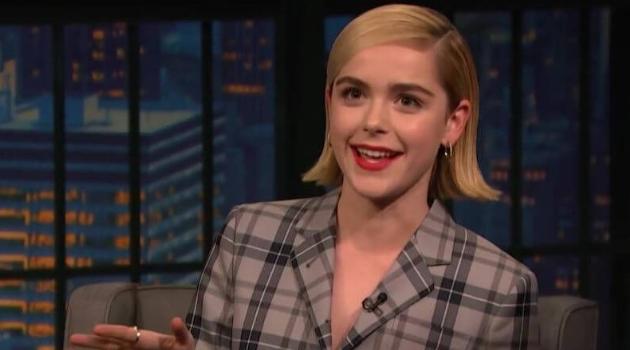 Kiernan "didn't expect to be allergic to cats," as she put it. The day after she filmed a scene where she held Salem close to her face, though, she had hives "everywhere, beyond belief." To deal with being around him, she's had to rely on allergy medicine to keep her reaction in check. Kiernan said that one day she had to take Benadryl, an anti-histamine that can cause drowsiness, and she thinks it was a mistake.

"There are like two scenes … where I'm totally acting on Benadryl," she admitted.

As for the cat, even though he can't help that Kiernan is allergic to him, she describes him as "one of the few actors that [she has] not gotten along with." Poor thing.

Watch below. Kiernan starts discussing her allergy woes around 2:05.

In addition to Chilling Adventures of Sabrina, there's another Riverdale spinoff in the works. Click HERE to read what we know so far.