It's been 13 years since Kingdom Hearts II came out on the PlayStation 2, and the buzz around Kingdom Hearts III is palpable on the E3 floor. People have been waiting for this game for a long time.

I haven't actually played a Kingdom Hearts title since the first one on the PlayStation way back when, but I couldn't pass up the opportunity to play it at this year's E3. As I waited in line, a staff member explained that Disney was way more hands-on with the making of this game, informing and guiding Square to create the best crossover event possible.

They had two demo levels available on the show floor, and I made it my goal to complete both before my 20 minutes with the game were up.

I opted to play the Hercules-inspired Olympus level first. It put me back in the shoes of hero, Sora, on the side of a series of sheer cliffs. Along with Sora's pals Goofy and Donald, I needed to scale the mountain to take on a massive, two-headed Rock Titan.

Immediately, the game introduced me to a new auto-run mechanic. Anytime I saw a wall with an odd shimmer, I could simply run toward it to dash vertically up its side. This felt great, though it did take me a second to get used to the game's unusual placement of the jump and melee buttons. It only took me a few moments to feel right at home with the game again.

I made quick work of the cliffs, dispelling a few Heartless minions along the way, until I finally reached the Titan at the peak. It had an incredible design—with hand-like protrusions with eyes creating its two heads—but it was huge, and for now, I had to focus on hitting the only part I could see (its feet).

The game had me target its feet with my Keyblade and I whacked away at them, unsure if I was actually making any progress whatsoever, until a foot took on a magma-like appearance. Once I'd achieved the same with the other foot, I was able to parkour up a series of shiny rocks on the mountain face to jump up to the Titan's heads.

After hitting them with my Keyblade a few times, the game prompted me to summon an "attraction." Curious to see what that was, I pressed a button, signaling the arrival of a gorgeous Disney theme park train covered in glittering lights. It was called Big Magic Mountain, and as it circled the Titan, on a track made of lights, I shot fireworks at its heads and hands until it was defeated and that portion of the demo was over. 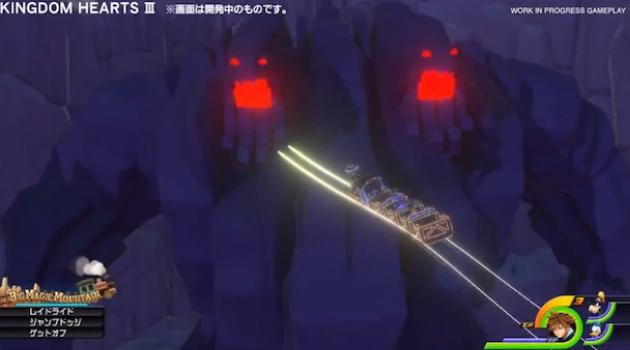 I loved the new moves and the boss battle in the level so far, but the rest of it was a big tease. The mountainous location could have been anywhere, and there were no characters from Hercules to be found. Still, it was only a portion of a level, and I think the rest has a ton of potential.

After finishing Olympus, I quickly selected the eagerly anticipated Toy Story level. The first thing I noticed is that the graphics on this section were incredible, looking way better than the first two Toy Story movies could have ever dreamed.

The level transformed Sora, Goofy and Donald into Lego-like toys, shrinking them down and placing them in Andy's famous bedroom. There, I fought some of the Heartless with Sora, summoning an attraction called the Mad Tea Cups, which spun around the room just like the ride until the baddies were vanquished.

Then, I met Woody, Buzz Lightyear, Rex and Hamm, plus a trio of squeeze-toy aliens and a squad of Army Men. They explained that a lot of weird things have been happening lately. On top of most of their friends disappearing and Buzz's laser becoming real, the evil Heartless have appeared and Andy's family has been nowhere to be seen. 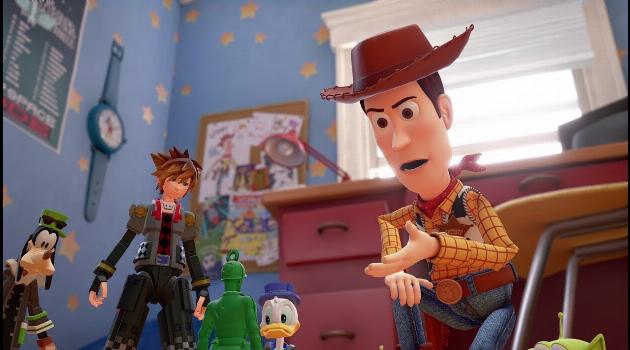 The toys agreed to team up with Sora's squad to find some clues, which they believed they'd find at a toy store called Galaxy Toys. However, the shop was way across town, so we'd have to venture out into the world beyond his window.

As soon as I auto-ran up Andy's wall, out the window and onto the roof, I was met with another barrage of Heartless enemies. They pursued me all the way down the street of Andy's green-lawned, suburban neighborhood as I ran toward Galaxy Toys. Because we were toy-sized, it was a long way to go, but luckily Sora had a few interesting new moves at his disposal. 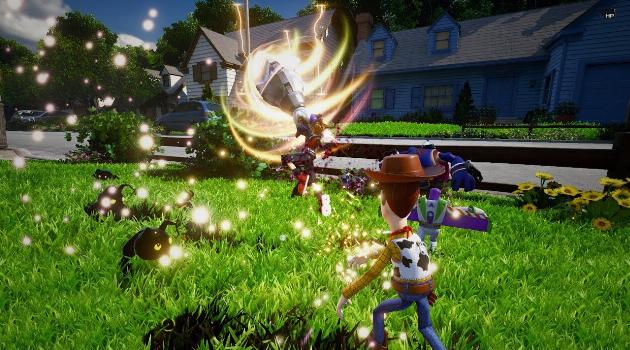 For example, after hitting a few enemies with my Keyblade, I was able to transform it into a big hammer I could powerfully swing at them. This part of the game also allowed me to call upon yet another attraction, a pirate ship that swung back and forth on a pivot like a carnival ride. It was very good for demolishing Heartless.

At the end of the street, we were transported to Galaxy Toys, where a popular new set of mech toys called Gigas were on display. Unfortunately, these Gigas were sentient and not incredibly friendly to Sora and his gang, but Sora did find his way into one of the suits. 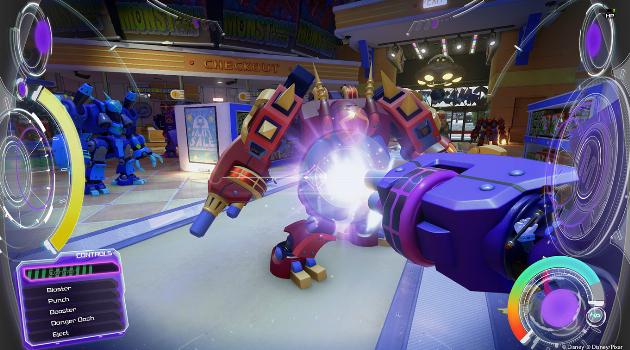 At this point, the game effectively turned into a first-person shooter. Using a powerful blaster attached to my arm, I had to weave between aisles of toys, taking cover behind objects to shoot at the attacking Gigas and protect my tiny toy friends. It was a close call, but I managed to defeat all of the invading mechs without losing my suit.

That was the end of the Toy Story demo stage, and I enjoyed that it really took the time to showcase the characters and the vibrant world of the film. The voice acting was also spot-on, with the original cast doing a few of the voices, and Tom Hanks' brother, Jim, standing in for him as Woody.

Although I've always found the controls in Kingdom Hearts games to be a little floaty and imprecise, the pure joy is in the worlds and the characters who inhabit them. Based on my short time with the game, I don't think fans will be disappointed with the final result. The game is set to launch Jan. 29, 2019.

If you're excited to see the return of some of your favorite franchises, click HERE for my first thoughts on Pokémon: Let's Go Pikachu!