Kiona Elliott was a key member of an MIT InvenTeam that developed a bike-powered water filtration system for people who don't have access to clean water! 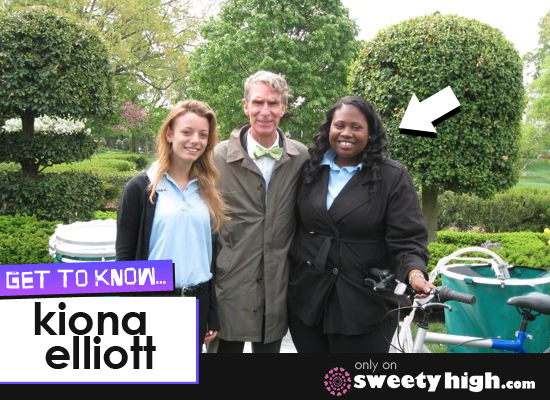 We recently spoke with Kiona all about her work with MIT InvenTeam, her passion for solving the problem of water contamination and open the doors that science, technology, engineering and math, or STEM, have opened for her!

Kiona Elliott was a sophomore in high school when a new course became available at her school.

The class was taught by Kiona's mentor and science teacher, Randa Flinn, and allowed students to conduct their own science experiments to compete in various science competitions.

"This class was my first taste of what STEM fields had to offer and I loved it," Kiona said. "At the end of that year, Mrs. Flinn approached a few of her students and asked us if we wanted to apply for the MIT InvenTeam grant, and that is how the whole process started."

When she started high school, Kiona never thought she would be good at science. However, she jumped at the opportunity. She spent the summer meeting with her team to brainstorm creative ideas for the InvenTeam grant.

"Our idea came about when one of our teammates shared her experience about her mission trip to Haiti and the dangers of the contaminated water there," Kiona explained. "She told us about how she could only drink bottled water and how she had to make sure that no water touched her face or she risked bacterial infection form the water."

Together, the team conducted more research on water contamination.

"Our team knew that we wanted to create something that helped provide clean water and stop the spread of water contamination diseases," she said.

The team received their $10,000 grant and started work. Each member of the team had their own key role. Kiona was the group's Chief of Communications, and was reponsible for her team's monthly reports to MIT, as well as communicating with any outside parties.

However, the whole team was responsible for the final product.

"Our entire team took part in creating the bike powered water filter and coming up with the most efficient design," she said.

Taking the bike from concept to reality was a multistep process.

"We had to consult with professionals such as electrical engineers, material engineers, machine shop owners, etc. in order to figure out if our design was feasible," Kiona said. "It took a lot of help from our community and a lot of scrapping of previous ideas but eventually we got a design that worked."

Next, the water filtration system needed to be built. It was created with the assistance of a machine shop owner.

"Our team had a total of 14 students and one teacher advisor," Kiona said. "However, our invention was truly a community effort and received the aid of various community members who helped in any way they could including raising money for our team to go to MIT's EurekaFest to present our invention."

All of that hard work resulted in the development of a water sanitation station that is completely bike-powered.

"When someone pedals the bike, the kinetic energy being produced is converted into electrical energy by the hub motor that is connected to the back wheel of the bike," she explained. "This energy then powers the filtration system's battery, which powers two ozone generators and a water pump. The system has two water tanks, one for contaminated water and then one for the sanitized. As water from the contaminated water tank is being pumped through the system, ozone sanitizes it so that it comes out clean in the final tank."

Another ozone diffuser is placed in the sanitized tank to continuously disperse ozone so that nothing could potentially recontaminate the water.

Best of all, the sanitation process is quick.

"This process takes no more than 20 minutes in order to sanitize a full tank of water," she said.

The team's hard work and innovation didn't go unnoticed. Kiona and fellow teammate Payton Kaar were invited to the White House to meet President Barack Obama at the White House Science Fair on behalf of the team.

"Traveling to the White House and meeting President Obama at the White House Science Fair was surreal," she said. "It was one of the most incredible experiences of my life and I was truly honored to be there."

Kiona Elliott's work on the project also led to her selection for a prestigious Gates Millennium Scholarship.

"Being selected for the Gates Millennium Scholarship was like the answer to all my prayers," Kiona said. "My entire life I knew that my only option to go to college was to get a scholarship. While my single mother did her best to provide everything that my siblings and I needed, she simply would not be able to afford my college tuition."

The scholarship allowed Kiona to pursue her dreams in higher education.

"Having Gates gave me the chance to go to my dream school completely debt free and gain the education I need to provide for myself and my mother," she said.

Kiona, who was once intimidated by science, is now pursuing a degree in the field, thanks to a grant she received with her scientific work.

"By the time I graduated and went to college I knew that a career in science is all I want because it will allow me to make the positive impact I want to make in the world," she said. "I would highly encourage students (especially young girls!) to get more involved in STEM and learn more about the opportunities within it."

Kiona has shifted her scientific focus from water sanitation to agricultural science and research.

"However, water contamination still remains a passion of mine," Kiona said. "In April I organized an event on my college campus that spread awareness about the water crisis in Tanzania and allowed students to help raise funds to build wells in villages and schools."

She attributes her success to the having the opportunity to be a part of an MIT InvenTeam.

"I was able to work along with my friends to create something that has the potential to save lives," she said. "This project helped me understand the power that STEM fields have in solving problems in the world."

To learn more about Kiona Elliott's project and other MIT InvenTeams, check out their official website here. You can also join us at SweetyHigh.com to tell us about all of your favorite girls in STEM!