Kira Kosarin On The Thundermans Season 2!

On Nickelodeon's The Thundermans, Kira Kosarin stars as Phoebe Thunderman, the teenage daughter in a family of superheroes! Kira spoke with us this morning to tell us all about the show's second season, which premieres tomorrow! 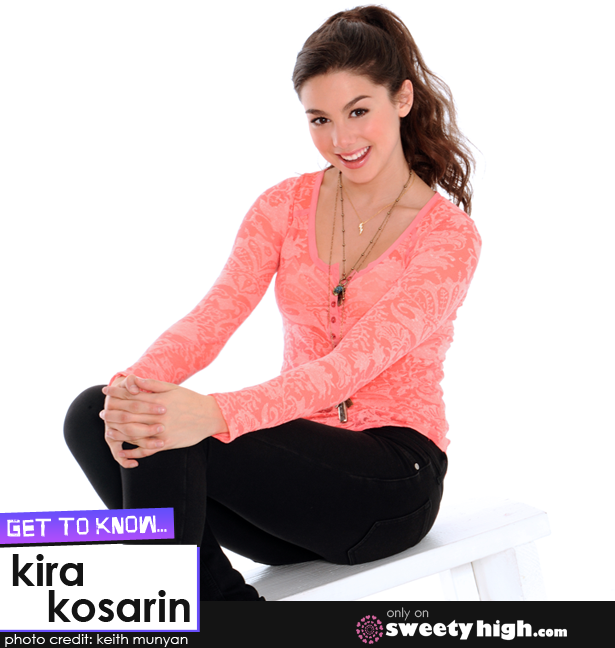 Season 2 of The Thundermans comes with a lot of new changes for Phoebe and the rest of the Thunderman family. As Phoebe deals with a string of crushes, her twin brother, Max, starts a band. Season 2 also features new recurring characters and awesome guest stars, including Malcolm Kelley and Tony Oller of MKTO!

"Phoebe gets a whole new look, a little bit of a style change," she said. "She's got a boho thing going on this year with cooler, different styles and a lot of jewelry. I had a lot of fun with it, just as a teenage girl who loves clothing!"

"Our Christmas special was so much fun to shoot," she said. "I got to wear about 8 costumes, each one with a different wig, hair and makeup, and we had a great time playing around with that."

She also had a lot of fun with filming a special crossover episode with the cast of The Haunted Hathaways!

In The Thundermans, Phoebe, and the rest of her superhero family, must keep their superpowers a secret from the rest of the world. As season 2 progresses, it becomes even harder for Phoebe to keep her identity under wraps!

"She gets into a little bit more trouble and it gets especially hard for her best friend, Cherry," Kira said. "It's hard enough to have a best friend and be truthful with each other, and when you add in the fact that she really can't telly Cherry the biggest part about her, that makes it a lot harder."

Despite all of these challenges, Kira said that Phoebe has really managed to grow since the beginning of season 1.

"I'm proud of Phoebe as if I knew her in person," Kira said. "She's still mature and responsible, but she's learning how to hold her own."

This is especially true when it comes to her relationship with her brother, Max, who wants to be a super villain.

"She's learning how to take charge and stand up for herself and she doesn't sit back as much," Kira said. "When she gets in trouble, she's a problem solver, and she's smart. She gets to showcase that a little bit more in the second season."

And as Phoebe has grown as a character, Kira has also developed as an actress. The more time she has spent playing Phoebe Thunderman, the more she has gotten to know her own abilities.

Much of this growth has taken place during season 2. During filming, the writers have started polishing up jokes and feeding the cast their new lines, without any time to prepare.

"That was really hard in the beginning, but now I feel like I know Phoebe so well that there's only four or five ways that Phoebe would say it," Kira said. "It makes it a lot easier because I've lived in that perspective for so long that it makes it easier to act like her. It's like we've grown up together."

As the characters have grown onscreen, so have fans of the show. Kira said that the coolest thing about The Thundermans is that it has something to offer for viewers of every age.

"There's a representation of everyone who could be watching the show," she said. "Between the little kids and teenagers, you get a little hint of each part of life, and the problems that go along with that."

And while The Thundermans is about a superhero family who fight to conceal their powers, at its core, it's about the issues that everyone faces.

"Yes, you have those superpowers, but it also really focuses on the things every kid goes through," Kira said. "It focuses on problems with your family, and dealing with school and crushes, and then it just throws in the superhero element, which just makes it even more fun. Because what kid hasn't wanted to be a superhero at one point in their life?"

Tomorrow night, Nickelodeon is premiering "Nick's New Saturday Night"! It begins at 8pm with a new episode of The Haunted Hathaways, continues with the series premieres of Henry Danger and Nicky, Ricky, Dicky & Dawn, and will conclude with the season 2 premiere of The Thundermans!

Kira urged fans to tune in as cast members from each show live-tweet from the @NickelodeonTV account!

"It's a really cool episode tomorrow," she said. "The kids get into some major trouble having to do with the Thundervan, which is the family vehicle. They've got to be smart and work together to work their way out!"

To keep up with all of the latest from Kira Kosarin and The Thundermans, be sure to follow Kira on her social channels below! You can also check out our onset coverage of season 2 here, and join our Thundermans fan club at Sweety High!