Kirby Battle Royale on the Nintendo 3DS is the latest release, putting multiple Kirbys with different abilities against one another in a series of increasingly challenging mini-games.

Kirby's abilities have become synonymous with the pink puffball, but which ones are the very best? We unlocked and ranked each of them in Battle Royale so you don't have to. 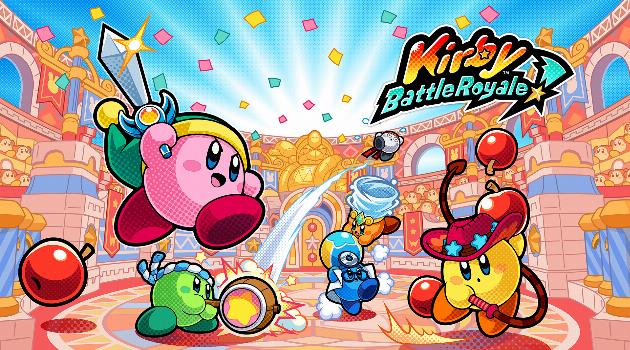 Kirby's bomb ability gives him a cute little wizards cap and the power to procure bombs out of thin air. He can throw little black bombs across the screen or plant bombs on enemies with a fierce close-range attack, as well as charge big colorful bombs that pack an extra punch. As cool as these abilities are, we found that extremely difficult to master—hence the low ranking. 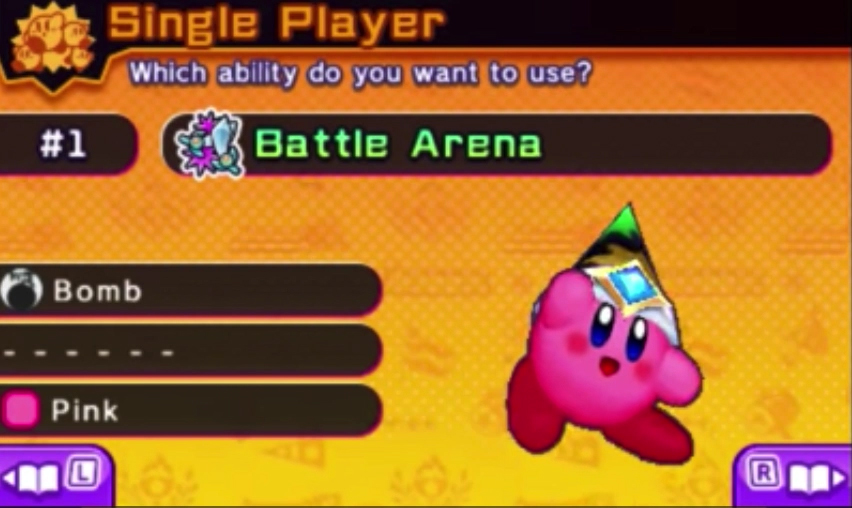 Fans of Super Smash Bros. will definitely recognize Kirby's cutter move, which sees him leaping into the air with a sword before slamming down and hitting enemies not only with the blade, but also with a wave blast. He can also throw the cutter a projectile or supercharge for an ultra-tough boomerang. While these moves are iconic for Kirby, they don't always hold up in Battle Royale, making you vulnerable to attacks from your opponents. 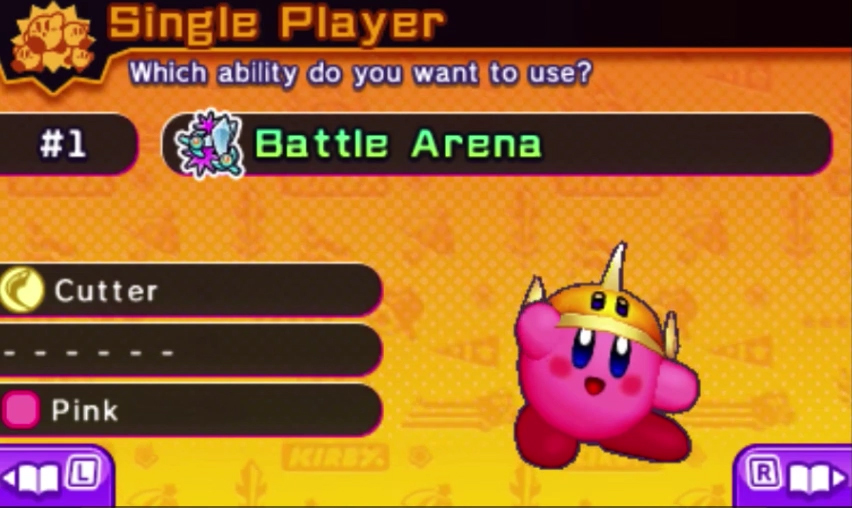 Kirby starts off only with the sword ability in Battle Royale. It's a decent, balanced power that lets Kirby thrust his sword forward, thrash it about or charge up to swing in a circle like Link's spin attack. He even wears a little green cap similar to Link's. Though it can be effective, the sword ability is pretty basic. As soon as you unlock more, you'll probably ditch it for something more exciting. 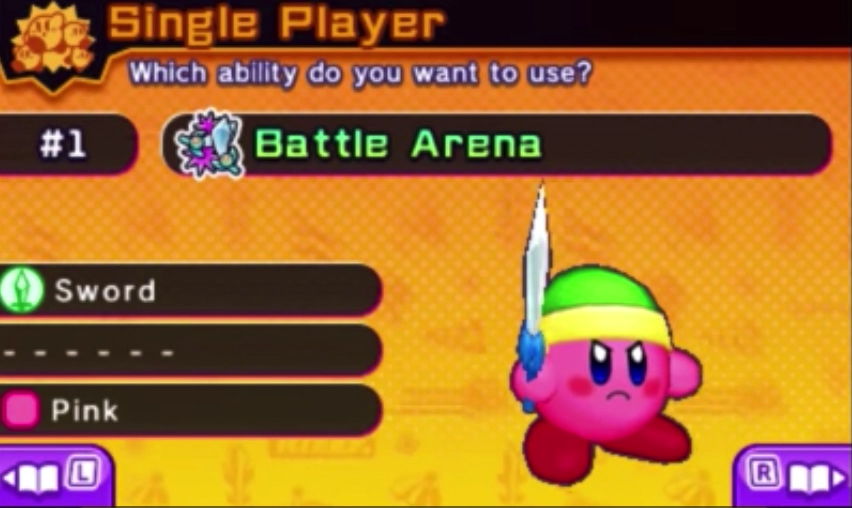 Kirby's spear handles a lot like the sword ability with the added long-range benefit of being able to throw spears clear across an arena. Up close, you can also repeatedly thrust the spear at the enemy or charge up for a single powerful lunge at your enemies. 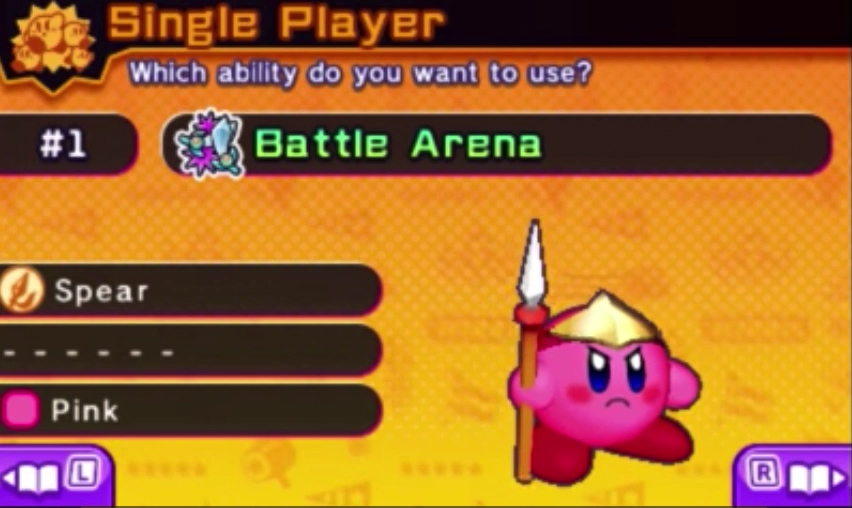 Kirby's mirror ability gives him an adorable jester hat and some interesting powers. As the name suggests, he can create a magical mirror that deflects enemy attacks and sends them hurling back toward them. He can also split into two mirror images of himself, striking enemies with his bodies or dodging attacks. When he charges up, he can even become a mass of six swirling Kirbys that are tough to take down. These tools aren't always the easiest to use, but in the right hands they can be very effective. 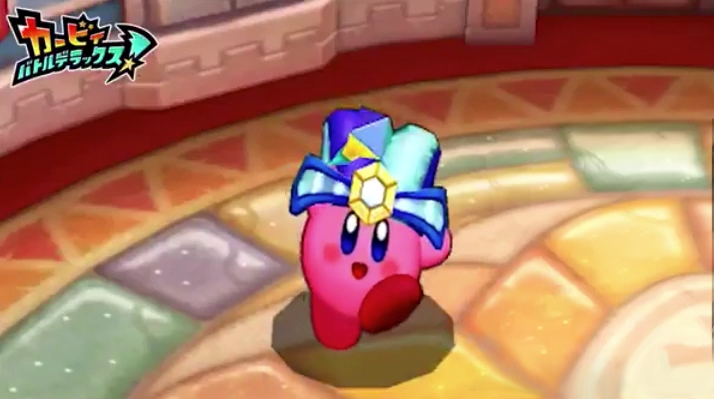 Kirby's little red bandana turns him into a melee mater. His basic attacks allow him to do sweeping kicks and flurries of punches, followed by an uppercut. He can even charge up to do an awesome kamehameha wave-like attack. If you prefer to keep the fight up-close and personal, fighter Kirby might just be your man. 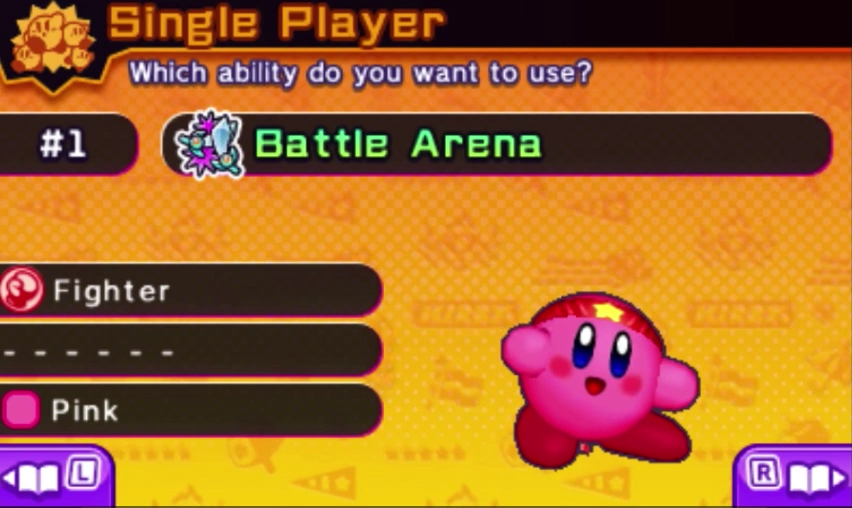 Hammer Kirby may be cute, but he is tough. He wears a Japanese tenugui headband and wields a giant mallet that can deal a lot of damage through a simple pound to the ground or a horizontal swing. His fiery slam is also a force to be reckoned with, sending your opponents flying. 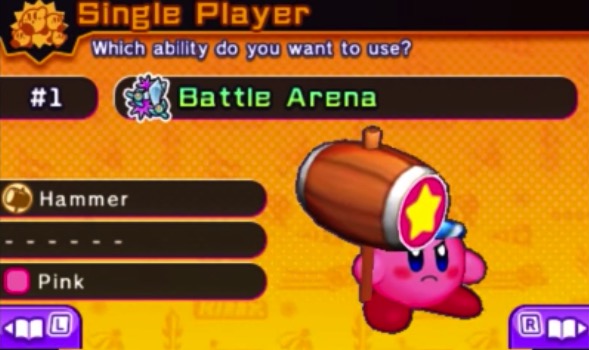 Ninja Kirby is as irresistibly sweet as he is strong, attacking a bit like the fighter, but with a twist. He can do incredible combos, combining physical attacks with sword parries, and can send a wind-up decoy ninja to explode upon enemy contact. He can even summon a whirling vortex to suck up enemies. So stealthy. 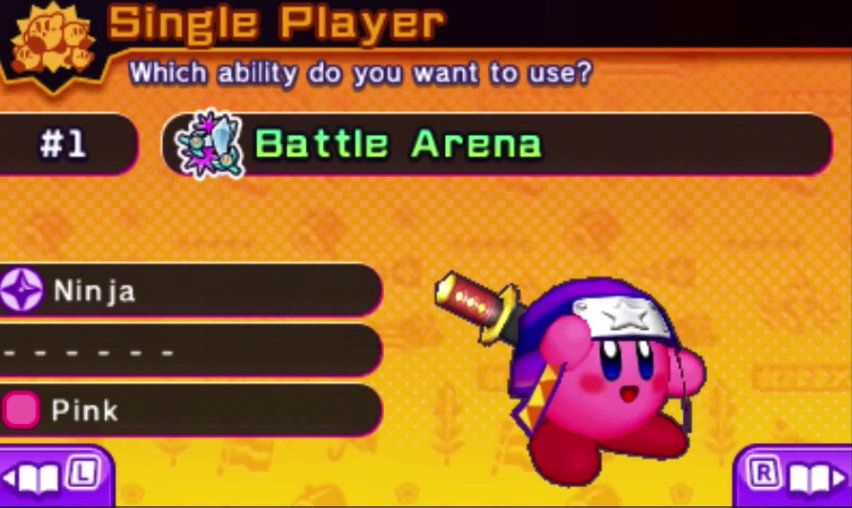 With the help of his tornado ability, Kirby (and his super cool tornado crown) can summon the power of the winds. He can spin powerfully in place or fly across the screen like a charging cyclone. He can even charge up a massive grey tornado that destroys everything in its path. He's a force of nature. 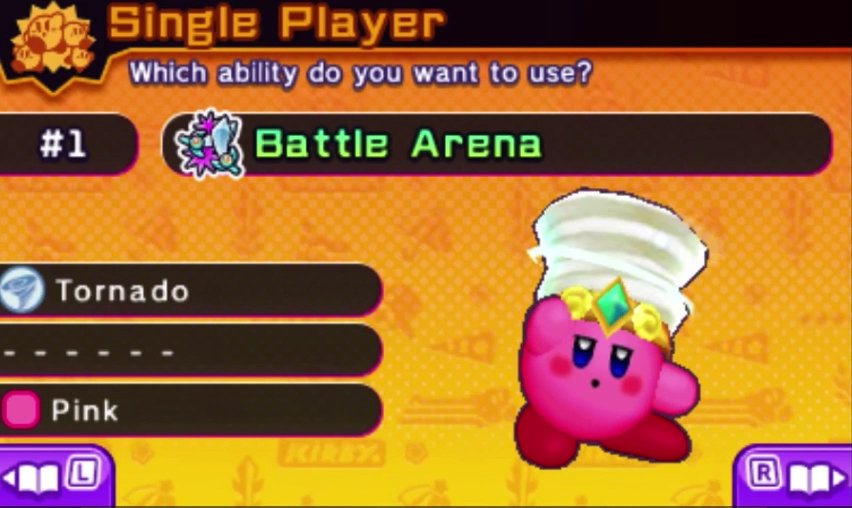 Kirby's parasol may look harmless, but it's anything but. Kirby can flick the parasol inside out, lashing enemies with a powerful spray of water, or spin the umbrella in a massive circle around himself, dealing tons of damage. The parasol can also form a protective barrier that protects against attacks or be used to spear the enemy before spinning them on top of your umbrella like a circus trick. In a melee situation, it's a weapon to keep your eye on. 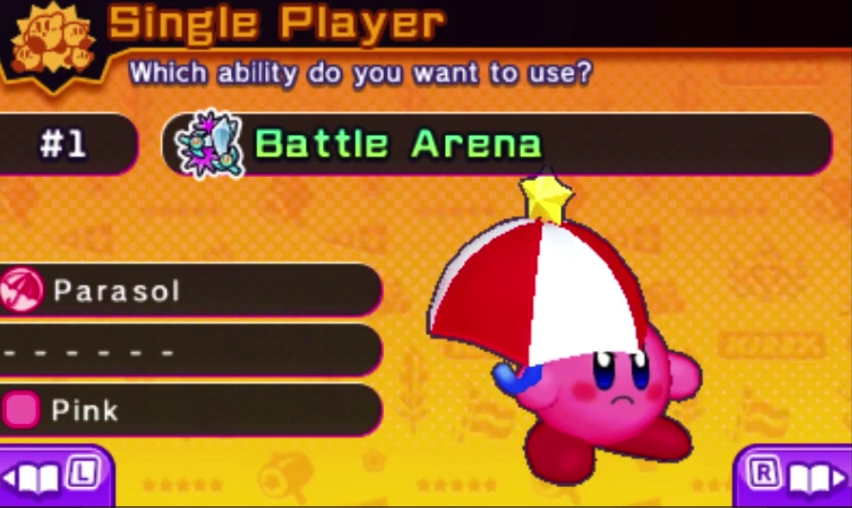 Ice powers come in very handy in Battle Royale. They can be utilized to snowblade across the arena or create giant ice walls between you and your opponent, and you can freeze your enemies with your icy breath. Transforming adversaries into frozen balls leave them helpless, so you can swoop in to pick up and throw them around to deal extra damage. If you're pressed for time, the last thing you want to be is ice. 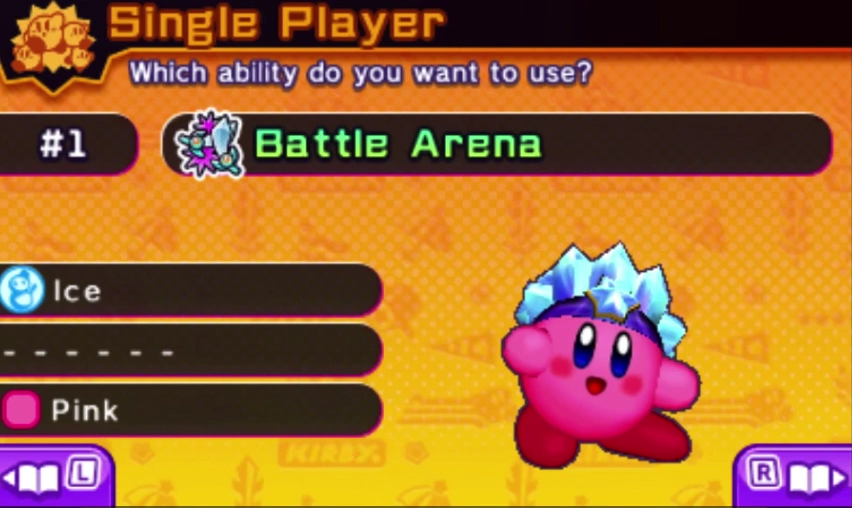 In our humble opinion, the doctor ability's head mirror, glasses and lab coat make them the cutest in the game. The doctor can throw giant pills at enemies or whack them at close range with his clipboard. He's also a master of potions, pouring chemicals between different vials to create a healing medicine, put enemies to sleep or create a powerful bang. His versatility makes his powers truly unique. 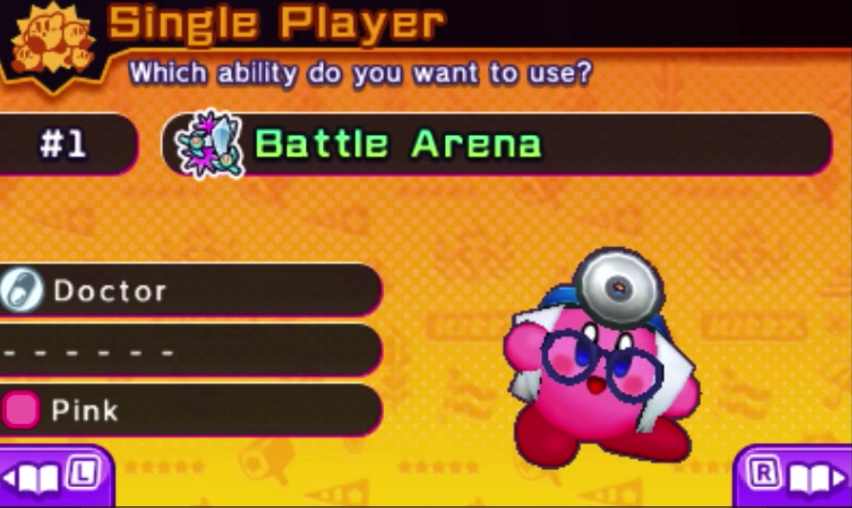 This ability turns Kirby into a whip-wielding cowboy, which is extremely useful in this game. Many of Battle Royale's mini games are about gathering and caching items, and the whip allows players to grab these items—whether they're apples, fuel cells or missiles—from a distance. In addition to being handy for collecting, the whip can also be flung repeatedly at enemies or charged up to lasso an opponent before swinging them around your head in true cowboy fashion. 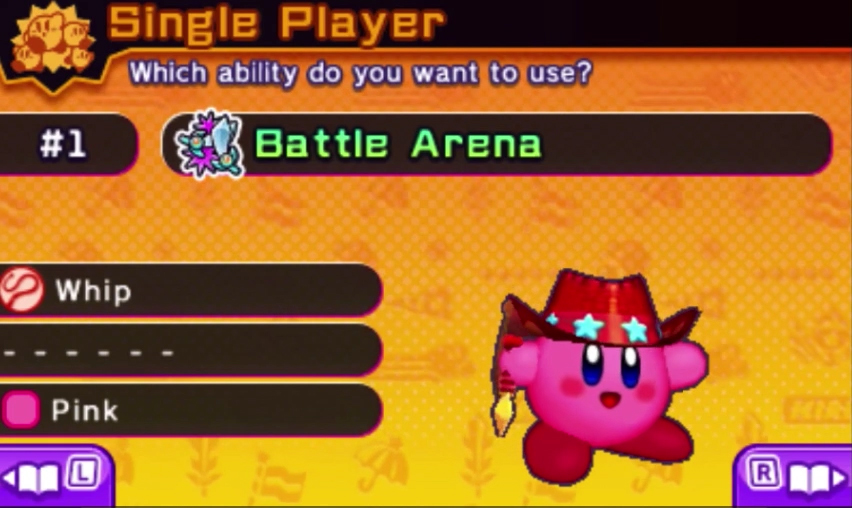 We may be biased, but we're particularly obsessed with Kirby's beetle ability. Not only does he wear a horned helmet that makes him look like a rhinoceros beetle, but this ability allows him to zip around the arena with some very tough wrestling moves. You can grab opponents with your horn, then jump into the air with them, body slamming them into the ground (or into other enemies) or repeatedly hit enemies with your horn. You can also charge up to briefly fly around the area, horn extended, to spear up to three enemies before slamming them all at once. We found this ability fast, versatile and great for beginners. Once we mastered it, we didn't really care to use any of the other abilities. 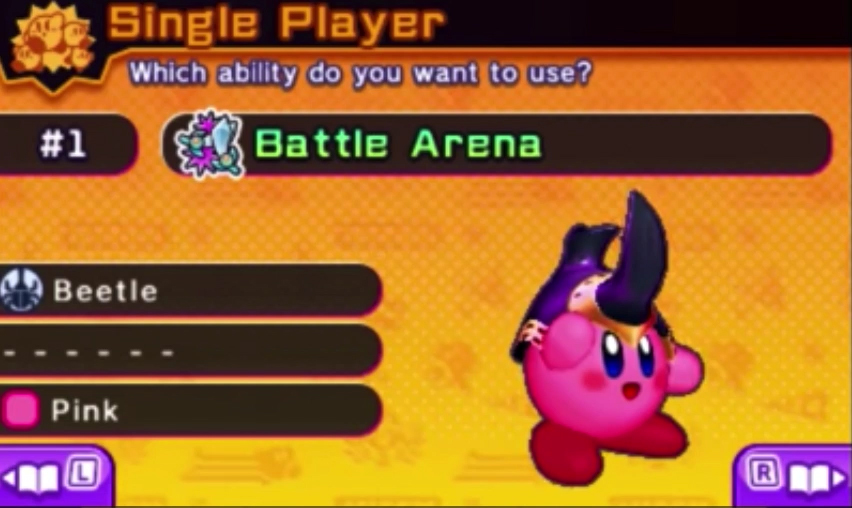 If you're looking to broaden your Kirby library on the 3DS further, click HERE to find out why you must play Kirby: Planet Robobot.