Beating Science Myths, 1 Bedazzled Pair Of Goggles At a Time

Yesterday, we shared an interview with LabCandy founder Olivia Pavco-Giaccia, who created a company that creates stylish lab goggles and coats and matches them with science storybooks to empower girls to embrace science. Today, we share more about the company, and the Kickstarter campaign that's bringing it to the masses. 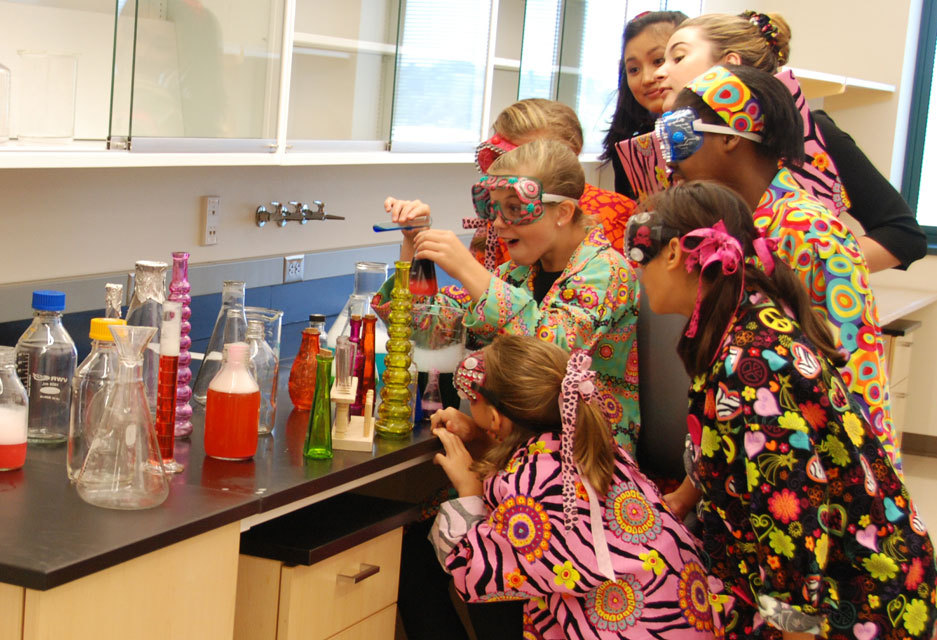 LabCandy's workbooks focus on young female characters who use science to solve the problems they face in life. In the current storybook, a girl named Ava loses a key and uses a fun chemistry experiment to turn the key different colors so that she can find it again.

"It was very important for me to make sure that people understood that science isn't just what you read in a textbook," Olivia explained. "It's not just what you do in a laboratory, separate from the world. Scientists solve really important problems that make the world a better place, and I wanted to communicate that."

One major factor that prevents many girls from becoming fully invested in science is a lack of female role models in the field. To counter this, characters also work as examples of young women scientists.

"When you close your eyes and picture a scientist, generally you're going to picture someone who looks like Albert Einstein," Olivia said. "There's just not a lot in that image that's interesting or relatable for a young girl. When you think 'Do I want to be a scientist? Is it something that I want to pursue?' and you have that image in your mind it could be a pretty serious barrier."

But Olivia couldn't make all of her goggles, lab coats and storybooks on her own for long. She decided that there needed to be a way to bring products to girls on a massive scale.

"Up until this point, every product that we sold was made by hand," Olivia explained. "That means cutting and sewing the lab coats ourselves, which is a really good way to fine tune your product and get to know the market, but it makes it difficult to fill a lot of orders."

LabCandy had a hot product, and they started receiving more orders than they could fill.

"We couldn't meet demand, so I knew that we needed to start manufacturing our product, but in order to do that we need to be able to pay for certain minimum order," she said.

The solution to this problem came in the form of the crowdfunding platform Kickstarter.

"We decided if people really want this, then they'll make it happen," she said. "The girls we're making this product for are the ones who are going to decide whether this product is really going to be a big thing and come into the world."

The campaign was more of a success than Olivia could have imagined.

"We put it up online, crossed our fingers, held our breath," she said.  "It's kind of crazy to imagine that you're going to put your product up there and you're going to make $20,000 in three days. I certainly never pictured that."

Currently, LabCandy focuses on equipment and workbooks for girls in kindergarten through third grade. We asked if there were any plans to expand the line for older girls and women someday.

"We had a lot of middle school and high school girls and even college graduate students saying that they wanted the lab coats for themselves," she answered. "Unfortunately we only make them in kids' sizes, for now, but maybe that's the direction we'll go one day."

You can learn even more about LabCandy and get a preview of their products at their website, here! Be sure to check out related STEM stories below and share your thoughts with us at SweetyHigh.com.