Lauren Rojas made headlines early last year after after she launched a rocket, captained by a Hello Kitty doll, nearly 14 miles into the sky for a middle school science project. 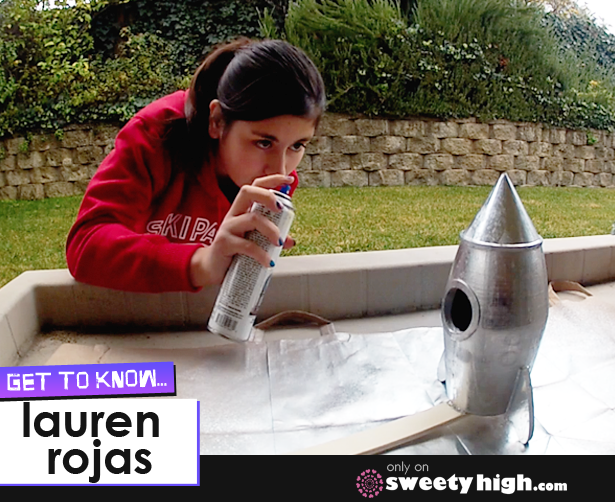 In a recent interview with the go-getting young scientist, Lauren told us about the motivation behind her big launch, and what the success means to her!

"In 7th grade I had a science fair coming up and I still hadn't decided what experiment I wanted to do," Lauren explained. "When I saw a commercial where these guys flew a weather balloon into space, I thought, if I add a hypothesis and a little science it will be perfect for the science fair!"

Lauren started building her rocket with help from a DIY balloon kit from High Altitude Science. The rocket she built included a small space for a "pilot."

"My dad had bought me a little Hello Kitty action figure on one of his business trips to Tokyo," Lauren said. "She fit perfectly in the rocket and so I decided to make her the captain of the rocket."

The rocket was fitted with cameras as well as equipment to monitor everything going on in the rocket, including an altimeter, satellite tracker and thermometer.

"My hypothesis for the whole project was that my balloon could go up a little further that 90,000 feet," Lauren explained.

She was right. Lauren's rocket traveled an astounding 93,625 feet through the air into near-space.

Lauren documented the effects of altitude on air pressure and temperature. They're shown in the text pop ups on a video showcasing Lauren's launch, which can be viewed at the bottom of the page.

During flight, the rocket recorded temperatures as low as -40° F. The flight took 1.5 hours, and when the rocket and capsule landed, they were located 47.5 miles from where Lauren launched them!

Lauren's project won first place at the Association of Christian Schools International science fair, and also garnered a lot of media attention. Lauren says the experience also helped to teach her the value of hard work.

"With a little extra effort you can make a good project into a great project," she said. "Also if you work hard enough anything is possible."

And with so many varying scientific subjects to pursue, Lauren said that she aims to always make science a part of her life. She wanted to thank all of those interested in her project.

"I hope it has inspired others to pursue their interests, whatever they may be," she said.

To learn more about Lauren's amazing experience, be sure to check out a video about the experience below! You can also tell us about your own science projects at SweetyHigh.com!