The New Professor Layton Game Is a Sneaky Puzzler Starring His Daughter, Katrielle

They follow the stereotypically proper and polite English gentleman Hershel Layton, who happens to be a professor of archeology as well as a professional puzzle solver. His curiosity always results in his getting wrapped up in everything from small-town conspiracies to supernatural events to ancient, mystical mysteries—and he always manages to find out the truth behind them.

So when I heard that the next installment would focus not on Layton but on his daughter, Katrielle, I was as curious as I was concerned. Fans were first introduced to the character via a huge and cooperative worldwide puzzle game online, but I couldn't really get a sense of what her new adventure would bring until I played her full game, Layton's Mystery Journey: Katrielle and the Millionaires' Conspiracy, for myself. The folks at Nintendo sent me a review code for the Nintendo 3DS so I could start my first adventure with Katrielle Layton.

The game begins on the day Katrielle opens her detective agency. She has a lot on her mind with her new work and her dad, the famous Professor Layton, missing, when a talking dog strolls in as her first customer. He has amnesia and can't remember his identity, so Katrielle names him Sherl after Sherlock Holmes. Adding to the conundrum, only Kat and her assistant, Ernest, can understand Sherl. 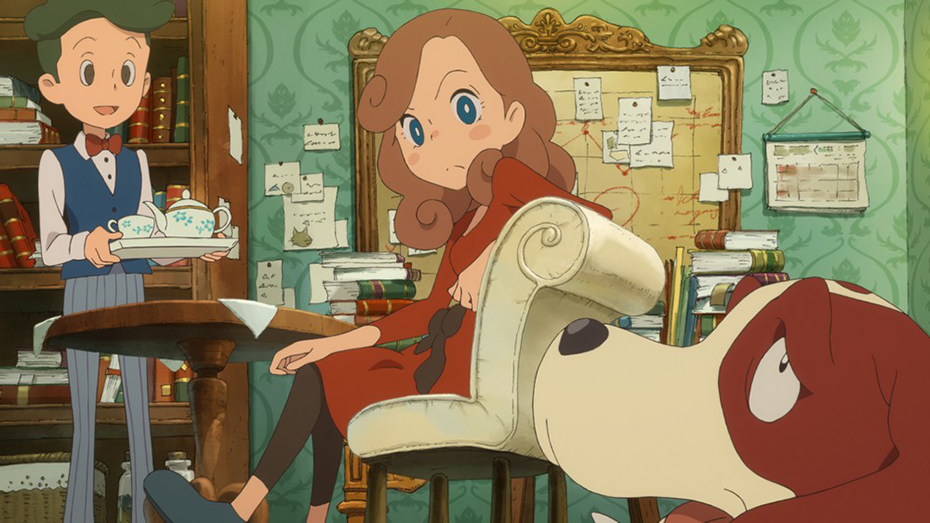 If this game were to follow the formula of all Layton games preceding it, the rest of the game would be about finding the clues to solve these two huge mysteries. It doesn't. The game breaks from tradition by forgoing one central story for 12 individual cases Katrielle must solve. The formula makes a lot of sense, as it was a mobile game before launching on the Nintendo 3DS. If you're crunched for time or prefer immediate gratification, chances are that you'll find these bite-sized stories more palatable.

Each of these cases is all about finding the six major clues that allow for solving it. They're gathered by talking to the right people at the right time or solving certain puzzles. Only once all six are gathered does the whole thing come together, allowing Katrielle to triumphantly announce her deductions. Each of these cases is well-written, with fascinating characters and answers you'd never expect—even if it does feel that no one ever ends up facing many consequences.

Katrielle is also precisely the character the series needed. In contrast from her sometimes stuffy dad, she's boisterous, spunky and confident. She's also positive in the face of pretty much anything. She's someone we can really look up to. Her assistant, Ernest, who harbors a secret crush for Kat, is as earnest, sweet and willing to help as his name suggests, and Sherl the talking basset hound is old-fashioned but always hilarious. 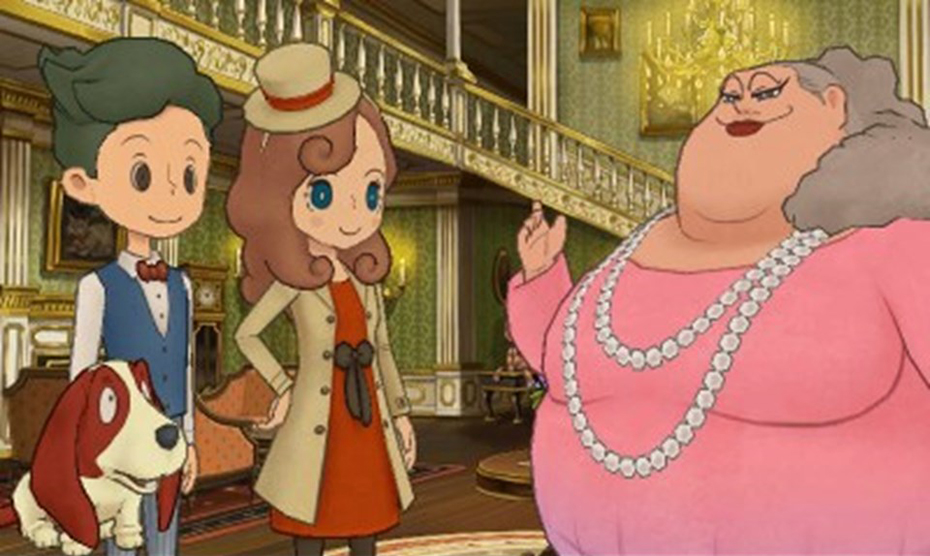 The gameplay itself in Layton's Mystery Journey is mostly the same as in past games. The player controls a little magnifying glass which they can move around the scene using the 3DS stylus. Your goal is to find and click on areas of interest, whether they're people to talk to or suspicious-looking areas. From here, you can get some handy secrets or activate a puzzle. These puzzles are the bread and butter of any Layton game. 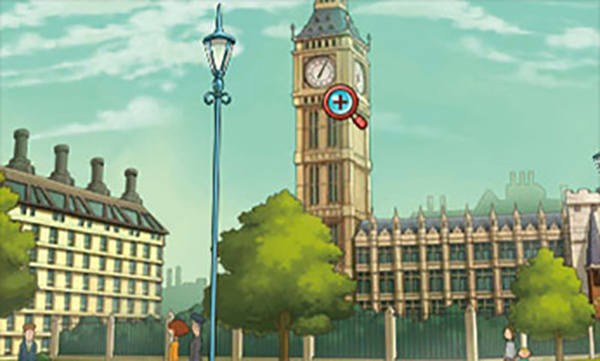 They range from logic puzzles to brain teasers to math problems and spatial reasoning questions, and each one gets you a little bit closer to explaining the mystery at hand. If you get stumped, you can spend "hint coins," found during your magnifying glass investigations, to unlock pieces of information that will get you to the solution. 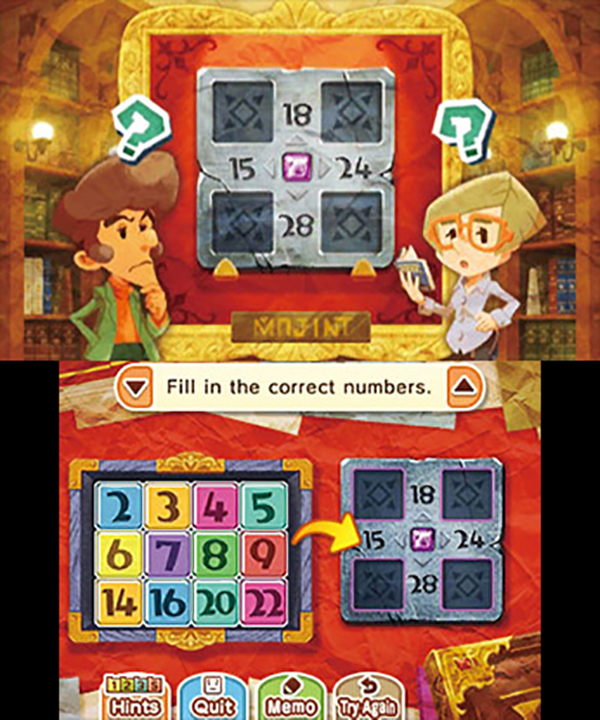 The puzzles in Layton's Mystery Journey feel a little different than past games, and for good reason. The classic Professor Layton "puzzle master," Akira Tago, passed away in 2016, and a new riddler took over for this game.

The puzzles aren't worse per se, but it does feel that a large portion of the puzzles is now trick questions. Time and time again, my instinct to solve a tricky but logical puzzle at face value was entirely wrong. Only after I'd been dinged for the wrong answer did I find that it was asking a separate, much simpler question—and sometimes only after I'd spend a bunch of hint coins pointing me in the right direction.

Some fans will find this sneaky kind of puzzle more satisfying. Others will probably grow tired of them after a while. Personally, I managed to catch on after a bit and performed a lot better while completing the second half of the game.

Though the game is subtitled Katrielle and the Millionaires' Conspiracy, said conspiracy doesn't actually come into play until the very last case of the game. All of London's richest inhabitants find themselves in what's essentially an escape room mansion, and if they don't solve the puzzles in time, they'll be forced to relinquish their fortunes. 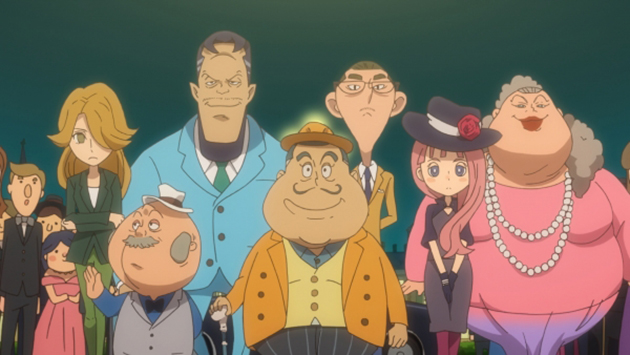 I won't go into too much detail about what happens next, but the case has a satisfying conclusion to all of the cases that came before it, bringing in all the key players and resulting in a sweet and heartfelt ending that I never expected.

Still, it might not be what Layton fans anticipated. In most past Layton games, you'd have to be completely heartless not to get at least teary-eyed at the final revelations. This game's resolution wasn't as emotionally resonant, and chances are this game won't make you cry. For me, that's a bit of a drawback, but you might see it as a plus if you don't want to sob over a video game.

And I don't know if this is a spoiler or not, but Katrielle never actually solves the mystery of her father's whereabouts or Sherl's identity. In fact, they're barely investigated. If those secrets were what spurred you on to complete the game, you might find yourself a little disappointed. Personally, I like that Katrielle's still looking. The game is a lot of fun, and it deserves a sequel. Plus, Katrielle drops a bombshell in the final lines of the game that really needs to be explored further.

The game is available now for iPhone and Android at $15.99 for the game, plus extra costs for DLC. If you'd prefer to play on your Nintendo 3DS, it's also in the Nintendo eShop for $39.99.

If you want to test out some of the puzzles first, click HERE to find out what we thought of Katrielle's online game.