Calligraphy is a serious art.

I regularly find myself watching calligraphy videos on Instagram. They're beyond mesmerizing, and I've always been so fascinated by how elegant others have learned to make their handwriting.

After watching one too many videos on the subject one night, I decided that I would attempt to learn the art form in a week by watching YouTube tutorials.

Keep on scrolling to find out what happened!

Realizing I didn't have a calligraphy pen, I hit up Michaels to pick one up. I ended up choosing a six pack of calligraphy markers because they were colorful… and 40% off.

To kick things off, I followed two tutorials that were rather simple. One of them taught me how to properly hold a calligraphy pen and how to master drawing straight lines:

The other taught me how to create a basic swirled stroke:

While these may appear easy, following the tutorials was harder than it looks. Holding the pen at a 45 degree angle was difficult, especially because I write like a caveman. But, I powered through and my first day of calligraphy ended up looking like this: 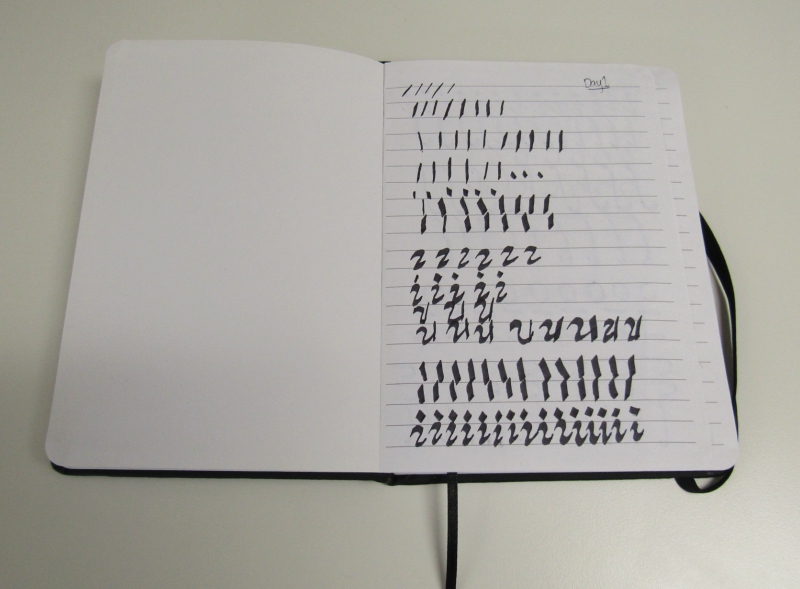 (Talk about lines, vines and trying times, amirite?! Hope you all got that reference…)

Pretty basic, but I had to start somewhere!

For the second day, I pretty much did the same thing I did for day one. The first tutorial I watched that day was on how to make vertical strokes:

Then I moved onto watching how to make horizontal lines:

And I rounded out this day of vigorous work learning how to create ovals:

Mastering the ovals and, for some reason, horizontal lines was a bit tricky. It definitely took me a couple of attempts to even get the strokes somewhat right.

Realistically, I could've practiced these strokes more than I did, but I grew tired and called it a day quicker than I should've. 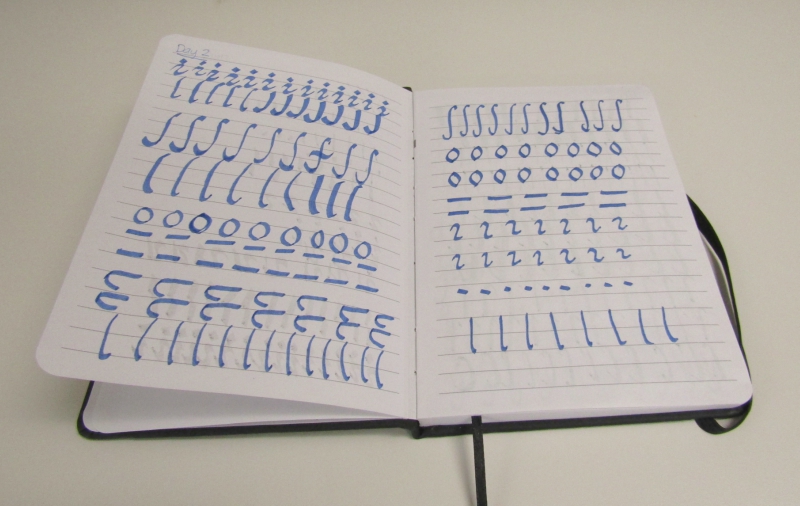 Bored with learning the basics of basic skills, I went full throttle for day three. I watched and practiced along to four different tutorials, which definitely tired me out.

I began the day with a tutorial that wasn't done by the same person in the previous videos. Boy, was that a huge mistake! Her calligraphy style, and even instruments, was far different than the one I was learning.

I felt a little bit discouraged after watching the above tutorial, because I couldn't keep up or execute the strokes in the manner shown. So I turned back to the tutorials I had grown comfortable with and went from there.

This tutorial taught me how to create n's and h's:

It was a lot of letters to nail, but I was pretty proud of myself for how they turned out! 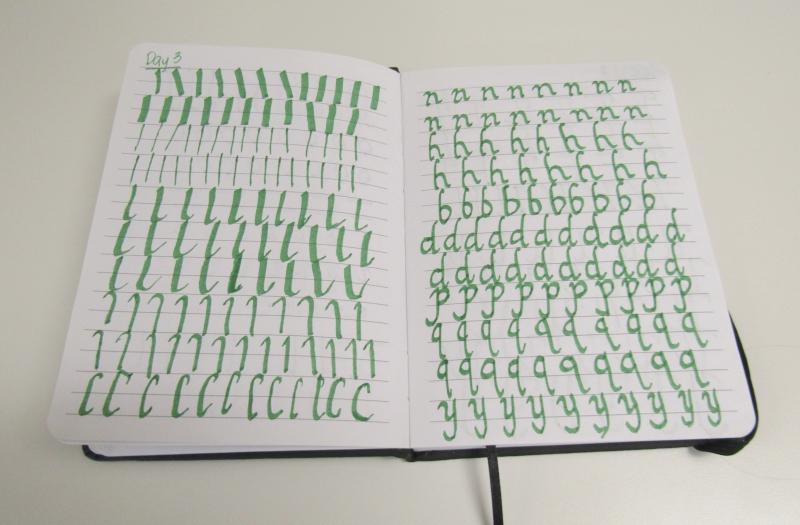 (I am a calligraphy master!)

I didn't end the day there, however. I graduated to learning how to write capital e's, f's, h's, u's, v's, w's and y's with this tutorial:

Capital letters are no joke, definitely giving me some trouble. I was annoyed with how imperfect my uppercase v's and w's were turning out, so I ended my lesson there.

I also tried to write out the alphabet, but because I didn't know how to properly write all the letters, it didn't turn out so hot. 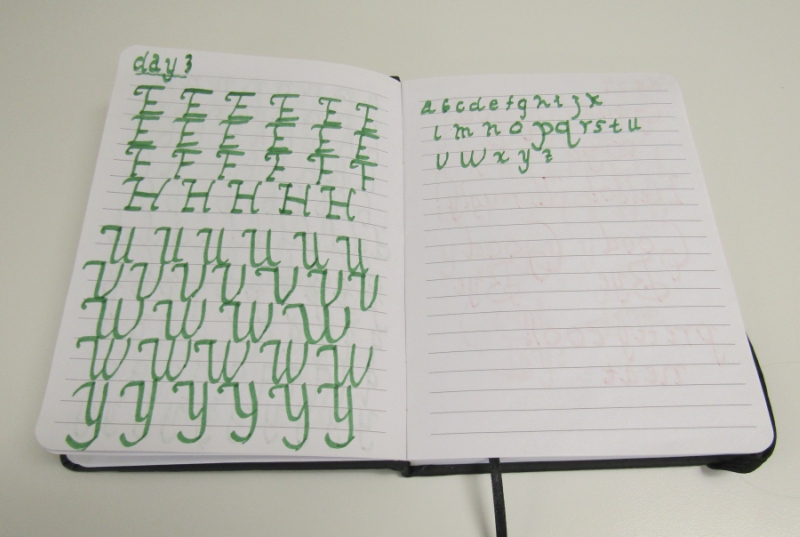 (Got more letters than Hogwarts over here)

I began my practice session with a single video that was about developing my own calligraphy style. Sounds easy, right? Let me assure you, it wasn't.

The tutorial began by teaching me how to write out "goodbye." I was decent at scribbling out the "good," but the "bye" was a struggle to recreate. For whatever reason, I could not get the uppercase "B" down.

The tutorial also moved quickly from simply writing out "goodbye" to turning it into some fancy schmancy word art. I was no way ready for that, so I wrote out my last "goodbye" and ended the day there. 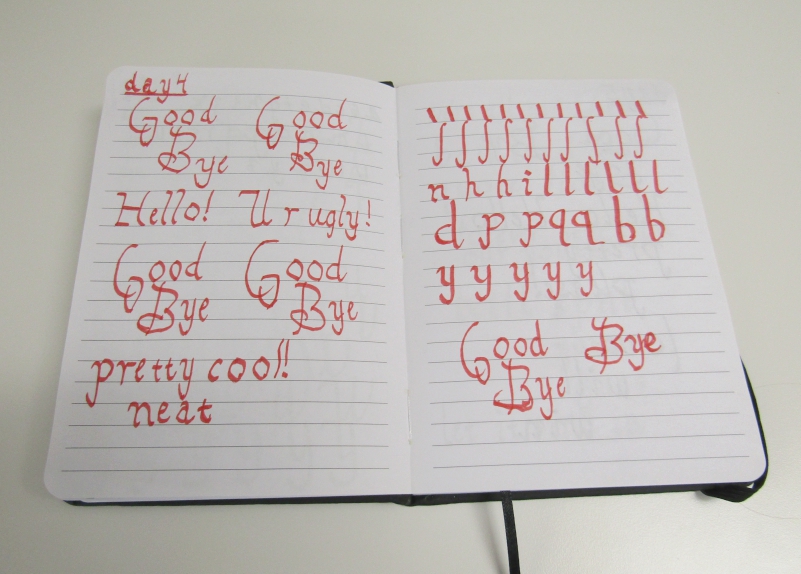 By day five, I was kind of over this whole thing. Instead of following a tutorial, I decided to just write out some phrases on my own. 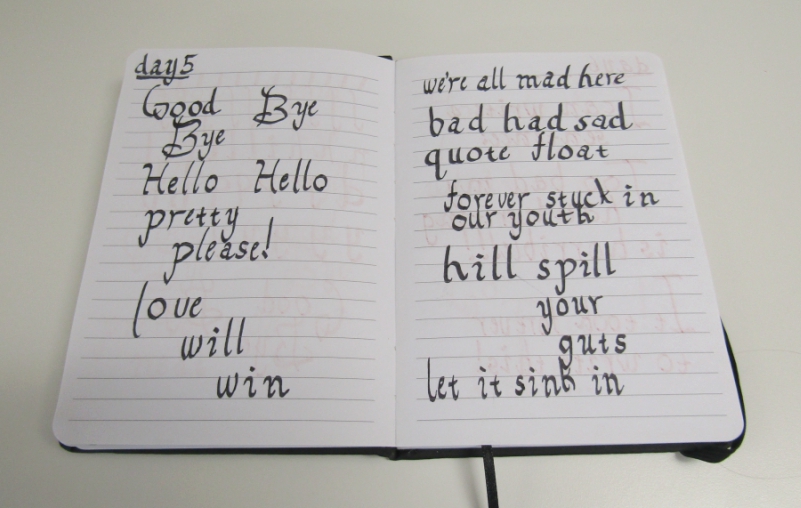 (Love will win, but my calligraphy skills won't)

They didn't turn out too terribly and my handwriting improved, but I was just done.

Looking back, I realized I had been a little bit hard on myself that day. Ultimately, I was upset that I hadn't perfect calligraphy. Realistically though, who masters that sort of skill in five days? No. One.

Following in the footsteps of day five, day six was another agonizing practice session. Again, I didn't follow a tutorial, but rather wrote out some sentences using the skills I had acquired. 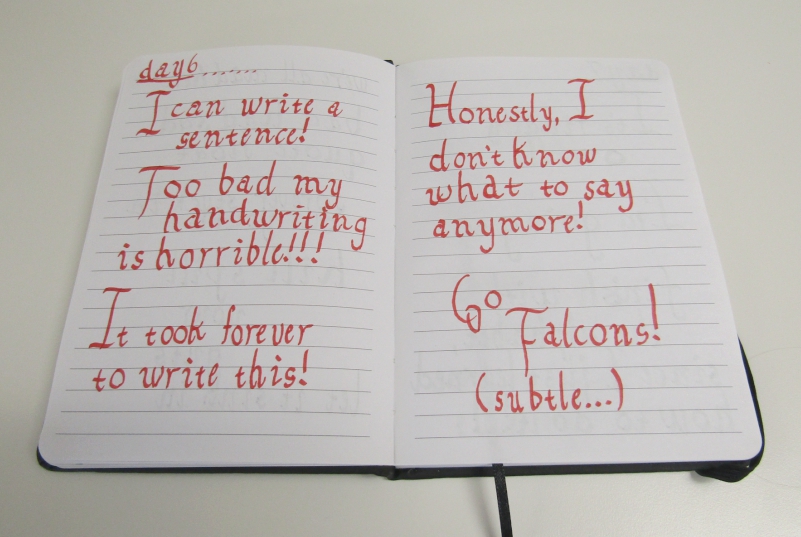 (Speaks for itself… Go Falcons!)

I mean, my calligraphy speaks for itself. Though now it doesn't look half as horrendous as I thought it did while I was scrawling along.

I was truly being far too hard on myself. Had I not, maybe I would've put far more time and energy into completing this project on better terms. Food for thought, I guess.

Before I knew it, I had completed seven days of trying to learn calligraphy. Yay.????

As I looked for a tutorial to watch, I realized I never actually learned how to write out the full alphabet. Sure, I knew how to write some letters, but I didn't look up how to write a's or r's or x's.

I found a tutorial by the same calligraphy artist I had been using, but I realized it wasn't a part of the lessons I had been watching in order. That was super frustrating! Nevertheless, I followed along with the vid below:

The outcome was decent, though it was rushed because I wanted to be dunzo with this painful ordeal. 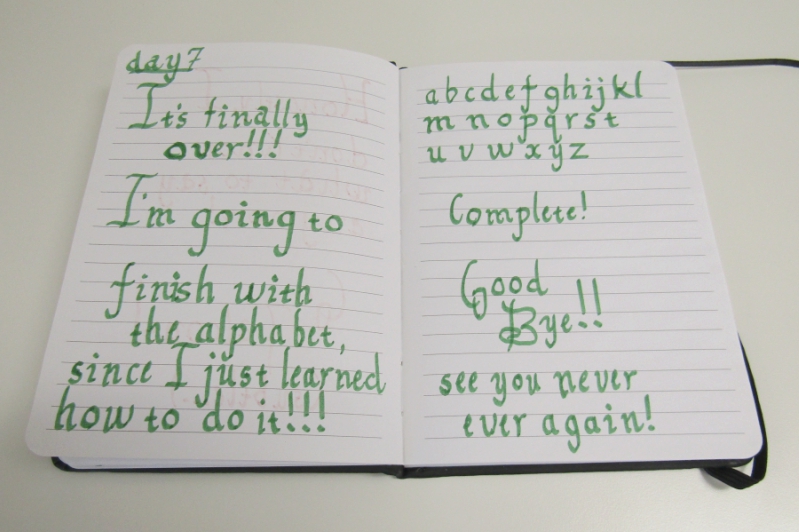 My Experience in a Nutshell

Trying to learn calligraphy clearly didn't go as well as I hoped.

It required far more patience than I currently possess, and it asked for time I wasn't fully willing to give. I mean, I practically gave up three days into the whole thing, so it was definitely a struggle to finish this assignment.

Though I ended up not being completely awful at calligraphy, I wasn't invested in practicing enough to boost my handwriting skills. But if you are someone who is willing to be far more dedicated to learning this skill than I was, you could totally do it!

As far as anyone's concerned, my calligraphy days are over. Who knows though, maybe one day I'll find myself picking it back up when I finally learn what patience is.

On a more positive note, HERE's what happened when I made my own nail polish with a DIY kit from Mixify Polish!