Right when I thought I was over The Legend of Zelda: Breath of the Wild, Nintendo released exactly the right downloadable content to renew my excitement for the game.

About a month ago, I completed the game's 120th shrine and finally felt it was a good time to put the game down. I'd invested more than 155 hours into the latest incarnation of Hyrule, and though I could technically spend endless hours more searching for the game's 900 well-hidden Korok Seeds, their secretive nature made that task too daunting to set as a real goal.

Cut to the end of last week, when the game added a bunch of great new features as part of their "The Master Trials" DLC pack. To get the DLC, you'll have to buy the Expansion Pass for $19.99, which will also include access to "The Champions' Ballad" DLC pack once it's available at the end of the year. Dropping another $20 for more Breath of the Wild features won't be for everybody, but for me, they've been completely worth it. Since it's released, I've added another 15 hours to my play time total—and there's still lots more to do.

I'm going to skip right ahead to my favorite new item, the Korok Mask. First of all, the mask is modeled after my favorite Korok, Makar from The Legend of Zelda: Wind Waker. Secondly, I love that—in addition to all of the other items in the DLC—you have to track it down yourself. The new wearable items are all found by following clues and understanding the locations on your map, and some are hidden quite well. The mask itself acts a bit like the scanner function, alerting you with jovial Korok sounds whenever a Korok might be hidden nearby. Finding every one is a delight. 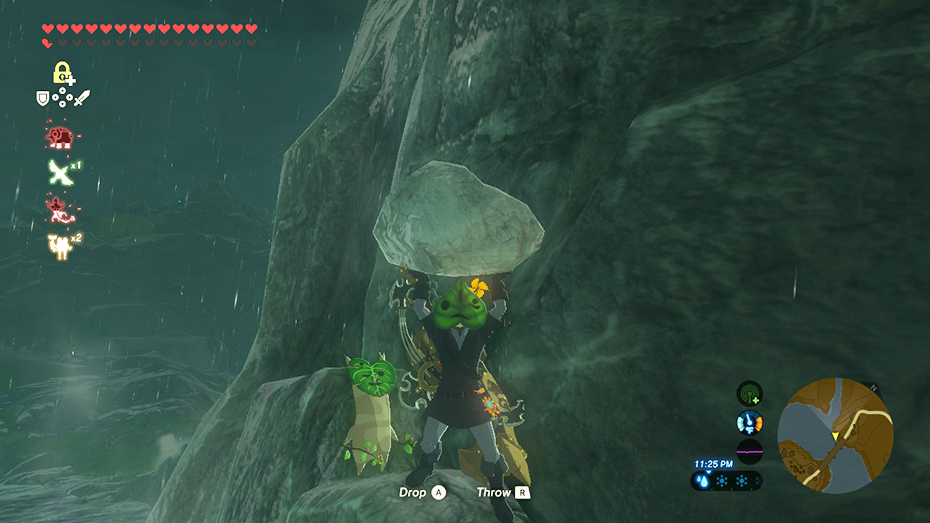 Of course, once the mask starts giggling and rattling, that doesn't mean finding the nearby Korok is a walk in the park. Locating the little guy when you know he's in the direct vicinity can be tougher than it sounds. That realization pushed me to discover a new method for discovering them. By using stasis, you can sometimes pinpoint moveable, out-of-place items. More often than not, that's where your Korok lies. 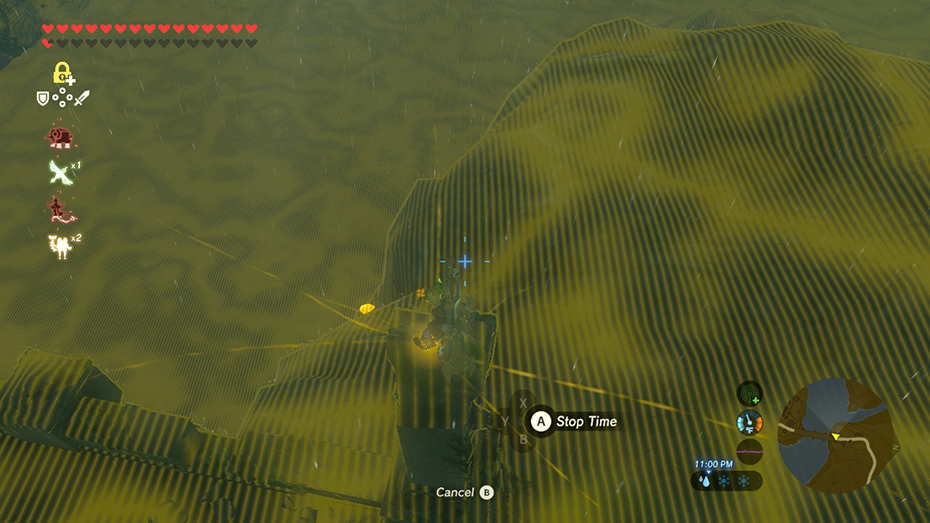 Before downloading the DLC, I collected 285 of the game's 900 Korok Seeds. With the help of the mask, I'm now up to 334. 49 Korok Seeds may seem like a drop in the bucket compared to the 900 available, but my new mask has been extremely handy—and I imagine that's what I'll spend all my time doing if and when I finally beat the incredibly difficult Trial of the Sword. 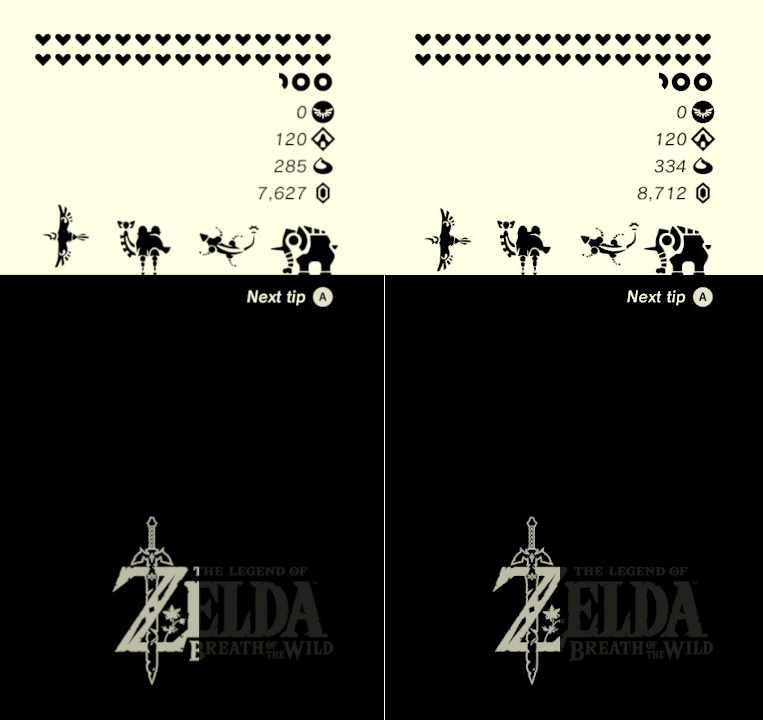 The Trial of the Sword

Speaking of the trial, it's excellent. If you've done the Eventide Island shrine, you'll be familiar with the premise. Each trial strips you of all of your weapons, powers from champions, protective armor and restorative items, leaving you to use only what you can scavenge (and your handy, handy runes) as you take on increasingly difficult enemies in various challenge rooms. It may start you off easy with Red Bokoblins that go down with a couple of hits from any weapon, but in the beginner's trial alone you'll also have to take down a Decayed Guardian, a massive stone Talus and the dreaded giant Hinox. 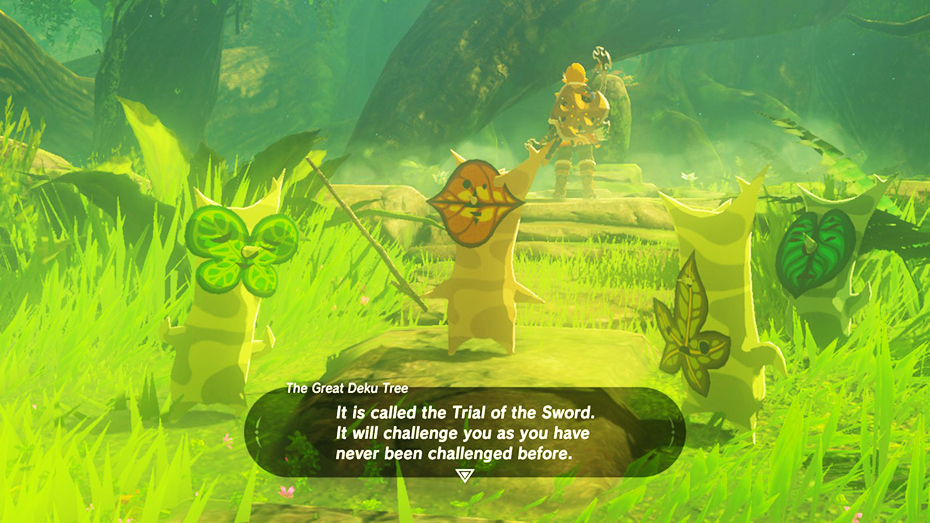 The middle trial feels exponentially more difficult than the first. There are gusty areas where your paraglider becomes extremely handy but you have to be extra careful about not hurting yourself with your own bombs. There's an entire section in the dark, where fire can become your best friend and enemies use the cover of night to get the upper hand. Lastly, there's a section full of Guardian Scouts of variable strengths, topped up with one of the scouts from the game's Major Tests of Strength. Without your favorite weapons and healing items, I imagine it will be the downfall on many otherwise unsuccessful runs.

And don't even get me started on the final trial (which I haven't quite defeated myself just yet). To make it through, you'll have to survive a horde of skeletons, massive lava pits, a freezing cold Lynel battle and Guardians galore. 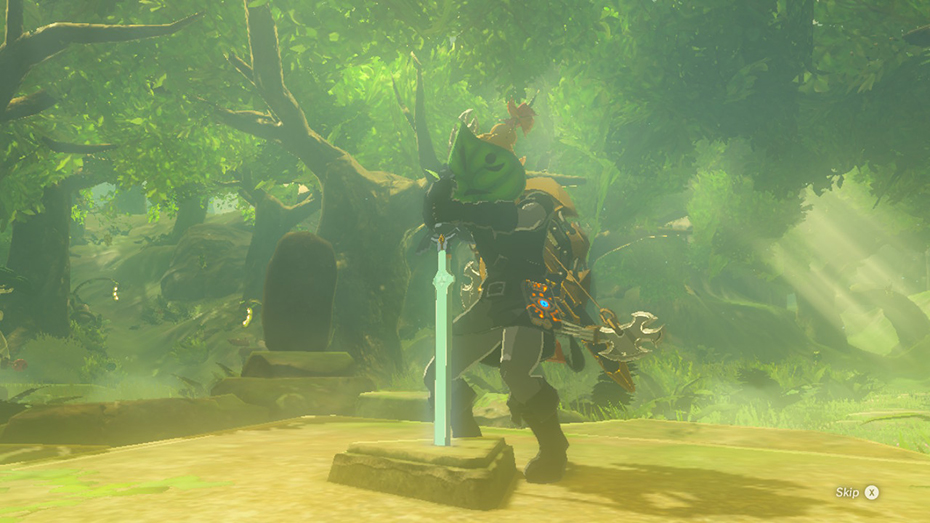 All of this work comes with a very handy reward—powering up your Master Sword. There are three trials in total, and each success will increase the strength of your sword by 10 points. Something very special happens to your sword when you beat the final trial, but I don't want to spoil it. 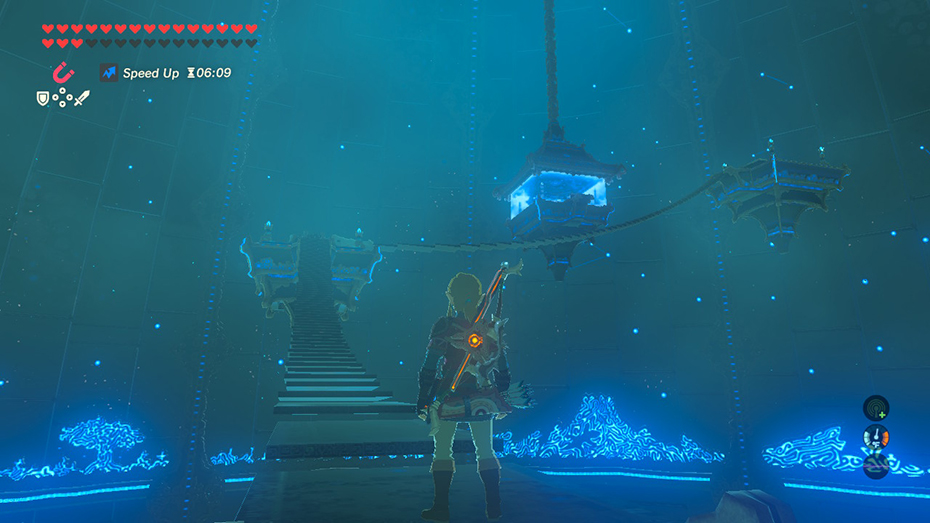 If you're not ready to take on these trials, other DLC features make the game more playable than ever before. The new Hero's Path Mode allows you to see everywhere you'd traveled on the map within the last 200 hours of gameplay. 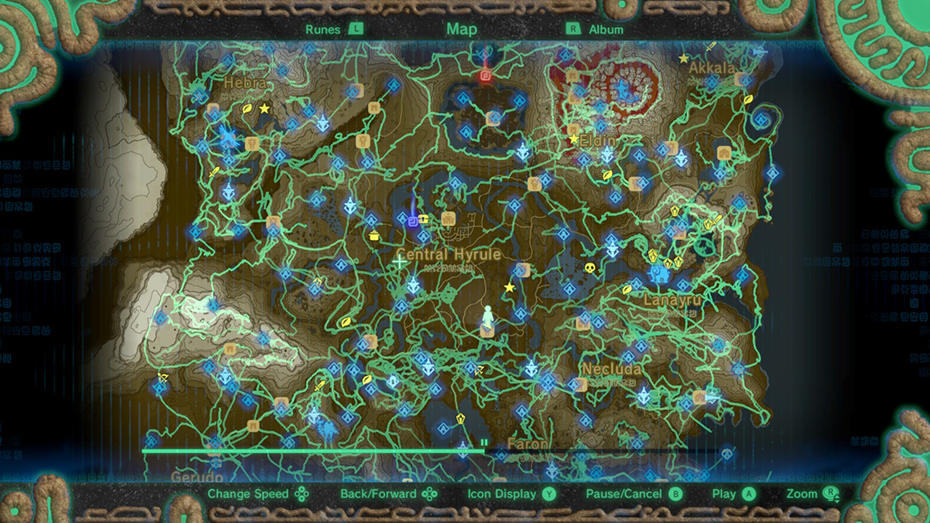 Honestly, I think this is a feature that everyone should have. I've been shocked by how many areas I'd somehow left untouched in more than a hundred hours of gameplay. There were bridges I hadn't walked across, mountain ranges I hadn't climbed, and giant fields I'd somehow bypassed entirely.

Other elements of the DLC also made these paths extra useful. It appears a bandit called Misko apparently stole a bunch of items from the other Legend of Zelda games and hid them throughout the world. The game gives you hints, but it's up to the player to discover these cleverly hidden items.

For the most part, these new clothing items are scattered across Hyrule Field—a vast area that's otherwise mostly empty. The new content gives this area new meaning, forcing me to locate the ruins of small villages and army garrisons to not only find awesome new goodies but also discover even more of Hyrule's elaborate history.

Midna's headpiece from Twilight Princess has heightened defense against Guardians and fits right in with the other Guardian armor. 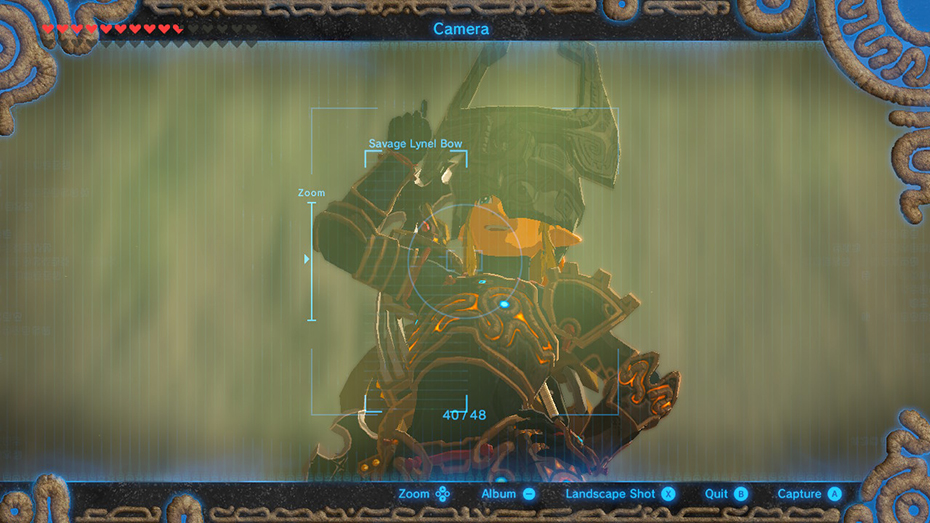 Tingle's strange outfit turns Link into the spitting image of everyone's favorite wannabe fairy, and also puts pretty much any character you encounter on instant alert. In this outfit, people react to Link the same way they do when he swings his weapons around them. 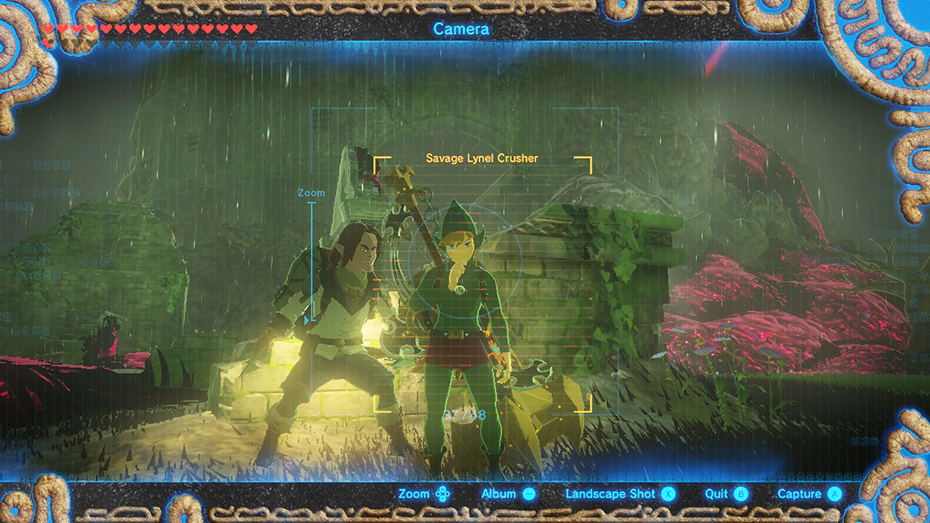 The Phantom Armor is totally intimidating and gives Link a nice attack boost. Aesthetically, it's one of my favorites in the game. 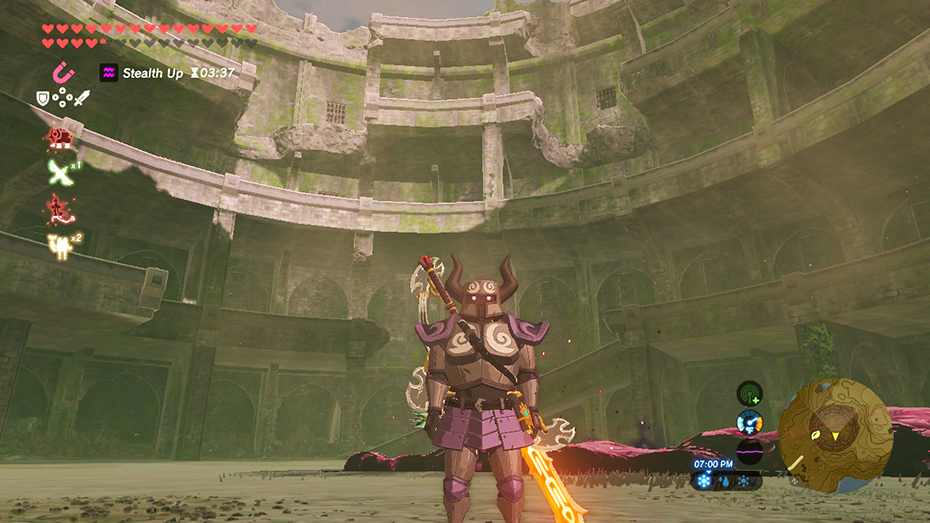 And, like the masks you can buy from Kilton, Majora's Mask allows you to walk into enemy encampments and blend right in, walking past bad guys without alerting them to your presence. The Nintendo Switch T-shirt looks pretty sweet on Link, too. 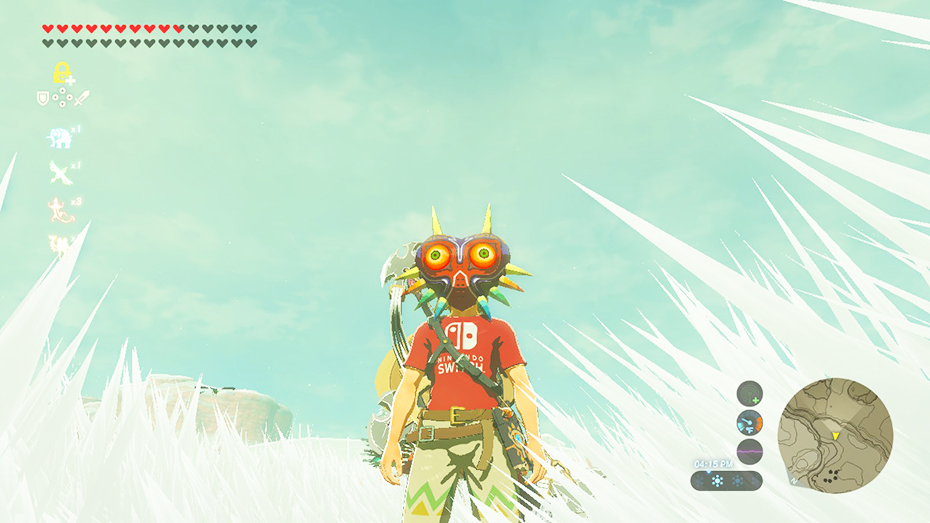 And if you're not into customizing Link's look, you can always seek out the game's new Travel Medallion. It allows you to instantly fast travel to the point of your choosing, which can be super handy for returning to a remote location after healing and stocking up on items. 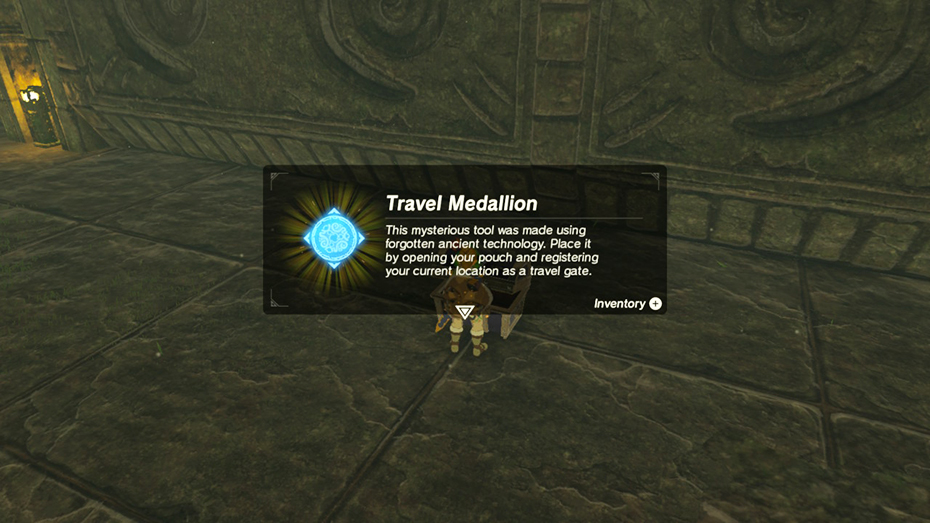 I must admit I haven't even opened up the game's ultra-hard Master Mode, which starts Link on a whole new, way less forgiving adventure. One of the toughest enemies in the game is called Lynel, and this version places a beefed-up gold version of this creature in the opening area of the game. I think I'm not quite ready for that yet.

With all of this new content, I can see myself playing the game for many more hours to come. The fact there's yet another DLC pack, The Champion's Ballad, coming this holiday season has me almost giddy with anticipation. We don't really know anything yet about the upcoming DLC besides the fact it'll focus on the champions Daruk, Mipha, Revali and Urbosa, as well as Princess Zelda herself. Honestly, the holidays can't come soon enough.

Love Breath of the Wild? Click HERE to find out which champion you are.