Lexi Giovagnoli On All She Wishes, Calum Worthy and Acting!

Lexi Giovagnoli stars as Sophie O'Dea in the upcoming film All She Wishes, which releases on digital and on demand January 20! 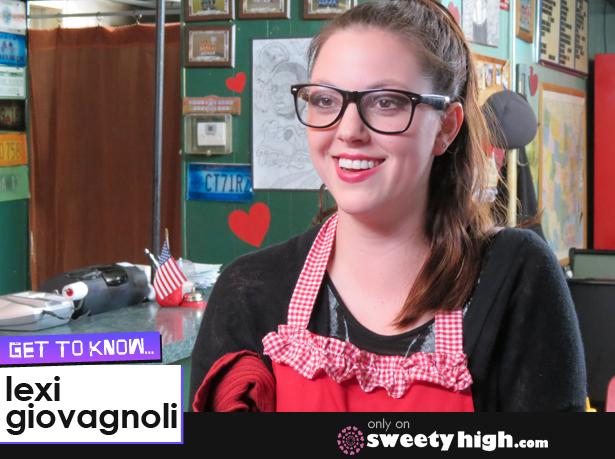 In a recent interview with Lexi, we asked her all about the new role, starring opposite Austin & Ally star Calum Worthy and much more! Come back next week to learn even more about the star!

"All She Wishes is basically a story about a girl, Sophie, who is having some personal turmoil and unfortunately dealing with the loss of her mother," Lexi told us. "Basically, over time and through receiving this car named Star from her grandmother, she finds a love for herself with the help of the character Drake."

It turns out that Star is enchanted. When Sophie makes an offhand wish that Calum Worthy's character, an actor named Drake, will take her to the Valentine's Day dance at school, he's whisked away from Los Angeles and magically winds up in the trunk of Star in Marion, South Carolina!

Initially, the two clash, but as Lexi realizes that the only way to get rid of him is to take him to the dance, she's forced to put up with him, and learn a lot about herself in the process!

Lexi got involved with the film when the producers passed the script along to her.

"I've worked with them quite a few times and I'm usually up for anything they pick because I love working with them," she said. "When you talk about the idea of a magical car it seems very silly in a way, but I absolutely trusted them. After reading the script I loved the story and I knew it was so much more than that. It's about Sophie's self esteem and needing to find herself."

She said she was particularly interested in the unique way Sophie's character grows in All She Wishes.

"I love the strong female stories where you don't need a guy, even if there might be a bit of a romance," she said. "I always thought it was very very cute and I loved the message it has for younger girls growing up. I know I would have loved to have more of that when I was a kid."

The character Sophie is sarcastic, a bit of a loner and usually dresses in black.

"There are aspects of Sophie that are very similar to me along the lines of being a little self conscious about things and hiding behind that sometimes," Lexi said. "When I was younger I was very shy."

Other than that, Lexi said that she and Sophie are very, very different from one another.

"Her sarcasm is a little more prominent than mine," she said. "I had a friend on set who has known me for a very long time and she was laughing because I'm never the person in all black. I'm normally wearing every color imaginable and I'm very bubbly most of the time. It was so not me."

In fact, she said the experience was a bit of a role reversal.

"She was dressed up like a mean girl, wearing all this makeup and colors, and I was wearing all black and combat boots," Lexi said. "It was interesting to play a character that had a lot of teen angst. I guess everybody goes through that phase, but I never went through it as strongly as she did."

Getting to play such a character with such a different personality was a blast to play, Lexi said. She also loved the chance to work with Calum Worthy, best known for his role as Dez on Disney Channel's Austin & Ally.

"Calum is the best," Lexi said. "I completely adore him as a person. He is the coolest, the sweetest person ever."

The two became good friends on set, and have had the chance to hang out outside of production as well.

"He is as hilarious as he is on camera and genuine in person and he is so easy to work with such a delight," she said.

The two worked particularly well together because of their similar work habits.

"I've worked with a couple other leading guys before and I always had great experiences but working with him was really special," she said. "We're about doing everything in absolutely the best way, and the way we prepare is very similar. It was awesome working with him where we were completely on the same page the entire time."

For example, Lexi loves to run loves as many times as possible before she shoots a scene.

"By the time we get to it we've just got all the moments down and it goes quicker for production," she explained. "Calum is exactly the same way, and by the time we shot it the two of us were able to find nuances and play with it He is probably one of my favorite people that I've worked with so far."

We absolutely can't wait for All She Wishes to premiere next week! Stay tuned for our review of the film, more interviews with Lexi and more, and join our community at Sweety High to dish on your favorite movies and more!