9 Fascinating Facts You Should Know About Lexi Giovagnoli

Lexi Giovagnoli is the star of the new romantic comedy All She Wishes!  We asked Lexi to reveal beauty tips, secret talents and more! 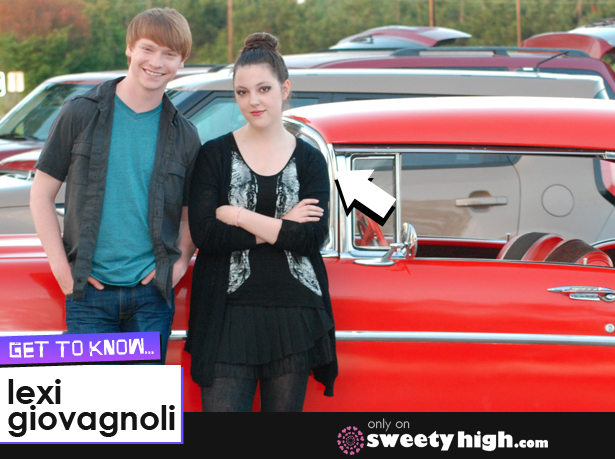 Check out her responses and be sure to share your own answers, and your thoughts on All She Wishes, in the comments below and at SweetyHigh.com! For even more on the film, check out related stories at the bottom of the page!

1. I love boots. Particularly cowboy boots, because I am from South Carolina, even though that's not really cowboy boot area. I love doing cowboy boots and sundresses. I'm usually always in dresses.

2. I also love scarves. I'm known for my scarves, I have so many of them. I actually need to probably go through and pick some out because it's getting to the point where I'm running out of room to put them.

3. With hair, I don't usually do as much with it other than hair pains. Hair pins are the miracle worker.

4. I am an avid user of mascara. I'm a huge fan of the CoverGirl LashBlast mascara. There's something about the brushes they use. I have a lot of eyelashes and I love being able to separate them because I hate when they get clumpy. I used to dance competitively and have to wear a ton of mascara and that one it doesn't ever clump. I swear by it and use it all the time. I've used it for like 5 years now.

5. Besides mascara, I also use a lot of concealer because I'm always looking tired. Those two are like my saving graces. If I have those, I'm good to go.

Strangest thing in your purse?

6. Probably the little notebook I have in my purse. I carry around a little notebook in case I have to write something down and need to make sure I remember it because I am extremely forgetful of things.

8. I do randomly have a Disney pass that's been expired for like two years. I don't know why I keep it. I haven't had a season pass for two years but I love Disneyland and I'm going to get one again, I just haven't had time. I guess that's probably weirder!

9. Oddly enough, when I was a kid I was very adventurous. It was a running family joke, and it's a conversation that comes up whenever we have people here, to embarrass me because, I have 3 brothers. But when I was a kid, I would eat the weirdest things.  For example, theres's a story of me eating pickled baby octopus. My family's Italian so it's a cultural thing. I didn't really know what it was as a kid but I would eat it. Even to this day I'm more than willing to try mostly anything unless it's putting my life in danger or it's illegal. For the most part I'm very much a "yes" person when it comes to something like that, trying something new or doing something different. Maybe you wouldn't call that a talent!

For more on Lexi Giovagnoli, check out more on All She Wishes in the related stories below. You can also join our community at Sweety High to discuss your favorite scenes from the film and more.