Lia Marie Johnson On Web Stardom and Her Movie Expelled!

Lia Marie Johnson is a YouTube star and actress who stars in the new film Expelled. We spoke with her to get the inside scoop on her online career, plus her amazing new movie role! 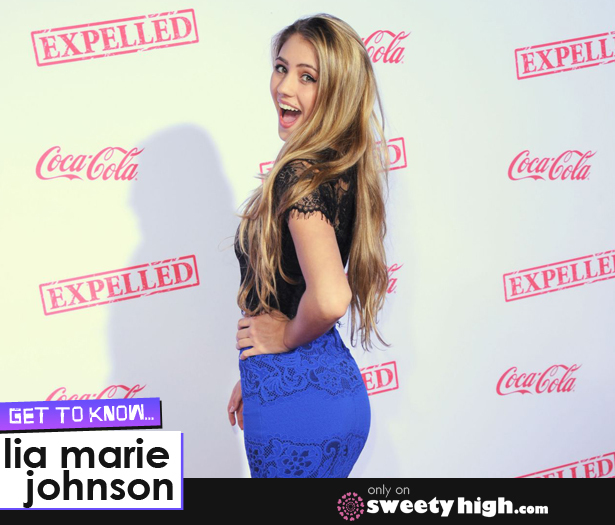 Lia Marie's YouTube channel was created in 2007. In the beginning, her mother uploaded Lia's talent show and church performances. Soon, Lia Marie decided to take creative control of the channel, which was already gaining fans.

"I guess it was the fact that I had gained a following without even really wanting to or even trying on YouTube," she said. "I kept getting more subscribers, so I thought I would put more things out that showed my personality, because people really seemed to like that, and it just kind of grew from there."

It worked, and fans gravitated toward her videos, where she shared her unique thoughts on the world, posted funny videos and revealed her musical talents.

"There was honestly no strategy," she said. "I was never doing it to get more subscribers. I was 11 or 12 and I didn't care about that. I was just doing it for fun and I wasn't thinking at all about a career on YouTube."

In 2010, Lia Marie started working with the Fine Brothers, who went on to create popular series such as Kids React and Teens React, where Lia Marie contributes regularly.

"I started working with them such a long time ago, before they were doing Kids React, when they would do sketches and stuff," she explained. "They helped me get on channels like Shane Dawson and Brittani Louise Taylor's channels. My channel started to grow from doing videos with the three of them. They were a big help in my YouTube career. It's just like a family and we've always worked together ever since that."

Most recently, Lia Marie starred in the film, Expelled, which also features web stars including Cameron Dallas, Andrea Russett, Teala Dunn and more. She explained that she didn't even have to audition to win the role.

"They just asked me if I would want to do it," she said.  "They didn't really say who was in it or what was going to happen. I said sure and asked them to send over the script, and when I read it, I really liked it. I really wanted to do a movie to show off my acting skills, so it was obviously something I wanted to do."

Unlike most other films, Expelled doesn't feature established actors. Instead, it highlights personalities that people know from across the internet.

"It was pretty cool because a lot of them were people I'd already known," she said. "Cameron and I had met a couple of times but never had worked together, and Andrea and I knew each other. There were also a lot of people I'd never met and never worked with like, Marcus Johns. He is hilarious and I'm so glad that I know him. He is so talented. It was just the community getting together and doing this big deal movie, which was really cool."

So far, Lia Marie has noticed that fans are reacting very positively to seeing the web stars they know and love in a feature film together.

"I've seen all the Tweets and the Instagram posts and the Vines, and they seem to be loving it," she said. "We got to #1 on iTunes and it's rated 5 stars, and that's crazy to think about. I hope they're really liking it!"

Her original song, "Moment Like You," is featured on the film's soundtrack. She said it was one of the first songs she ever worked on, and she cowrote the song in February with songwriter Michael Warren.

"It's kind of crazy to even think about what was going through my head at the time," she said. "It was basically just about being left alone and feeling alone, and how you don't want to be alone. That's not the best feeling in the world and you kind of just want to have someone there with you. When you're having a good time you want someone to share that with."

She said it was an honor to have her song appear in the movie.

"I really didn't expect that," she said. "It was a really last minute thing that my song was going to be in the movie and I was so excited because it was basically the very first single that I'm putting out. The whole thing is just crazy for me to think about."

You can buy your own copy of Expelled here, and click here to get Lia Marie Johnson's single "Moment Like You" on iTunes! Share your thoughts on Expelled in the comments below, and join our community to discuss your favorite web celebs at Sweety High!