Nobody prints out photos anymore.

As cell phones have become our portable hi-res cameras and photo albums, physical photographs have kind of become a thing of the past. I think it's a shame. 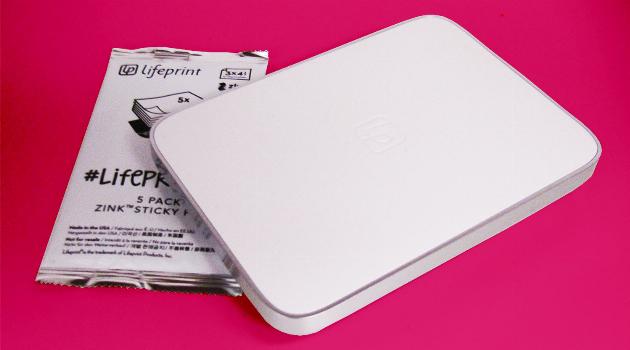 Maybe I'm old-fashioned, but I love decorating my home and workspace with framed photos and collages—even if most of my pics are printed out on regular printer paper.

So when I was asked to review Lifeprint, a gadget that's dedicated to printing cell phone pics, I was excited to test it out. I was sent the machine, plus some photo paper, so I could share my honest experience using it.

Lifeprint is a portable Bluetooth printer that can print images directly from your iPhone onto 3-inch by 4½-inch stickers. It uses heat-activated Zink paper, so there's no ink involved and you never have to worry about buying refill cartridges.

Once printed, you can also use your phone to scan the photo with a special feature called "Hyperphoto," which allows you to watch a video associated an augmented reality image. To get a better idea of how that works, check out the video below.

After opening up my Lifeprint box, my first step was downloading the Lifeprint app from the App Store.

Before I could do anything, I had to create a Lifeprint account, which included entering my personal info and email, as well as verifying my phone number.

Once that was done, I was excited to start printing photos, but I'll admit the app wasn't entirely intuitive at first, as there a lot of extra bells and whistles. Most importantly, there's the section where you can select images from your camera roll (or Instagram or Facebook accounts) to print. There's also an inbox where you can read messages from Lifeprint, as well as a section where you can see other people's Lifeprint photos and videos. I don't find either of these features particularly useful, because for me, the app is more about my own personal experience with my photos.

Once everything was set up on the app side, it was time for me to deal with the actual printer. The printer is more than six inches long and four inches wide, making it pretty sizeable. Though it's definitely portable enough to carry around in a backpack, you'll have a tough time finding a pocket that will accommodate Lifeprint.

I opened up the included pack of five Zink sticker sheets, plus a blue smart sheet for calibration, before I slid off the lid and placed the sheets face-down inside the printer.

After closing it up, I thought it'd be ready to print, but I ran into a couple of snags along the way. The battery was low, so I plugged it in to charge via the included micro USB cable. The app told me to reset, so I closed and reopened it a few times, but continued to get the same message and see that the device still had low battery.

Only later did I realize I had to turn off the device itself and turn it back on. By then, it was fully charged and I was ready to get printing.

At that point, all I had to do is select the pic I wanted to print and wait. Once it scanned the blue smartsheet, my image printed quickly and beautifully. The image was high-quality, especially given that the there's no ink involved in the process. 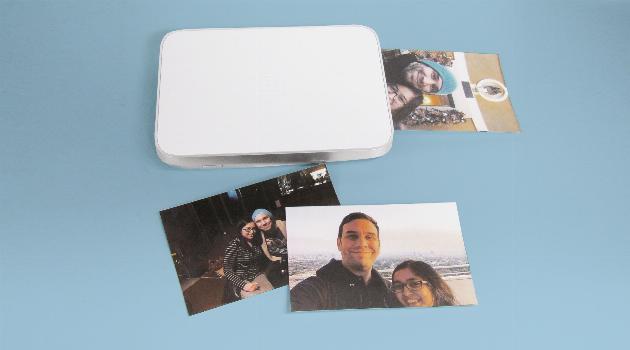 The photos print onto 3-inch by 4½-inch sticker paper, which was larger than I expected. In the past, I've used iPhone printers that printed 2-inch by 3-inch Zink stickers, and those now seem tiny in comparison. Whether this big ol' sticker is an upside or downside depends on your personal preference.

I also like that they print on sticker paper because you can keep them intact like a photograph or peel them away to stick wherever you please. I've also heard that Zink paper doesn't ever smear, but I was still careful not to touch the printed side too much when I handled them.

While I didn't dig too deeply into the Hyperphoto AR feature, I did play with it a bit and found it pretty neat. If you frequently record video on your phone, you'll probably get more mileage out of it than I did.

Overall, Lifeprint is a really cool little gadget that's especially useful if you're a fan of photography and filming videos. However, some will find the price point a bit high for what boils down to a phone accessory.

The Lifeprint 3 x 4.5 Hyperphoto Printer for iPhone retails for $149.99. While it's currently sold out on their website, we've spotted them elsewhere online for a little cheaper. Still, we understand that not everyone will be willing to dish out more than $100 for a device that prints photos.

It gets even more expensive when you consider the Zink photo papers. When you buy the printer, it only comes with five sheets to print on. A 20-pack costs $29.95 on their website, while you can nab a 40-pack for $49.95. That's a lot for photo stickers, even if you can make them come to life.

However, if that's not too rich for your blood, Lifeprint does exactly what it sets out to do. The photos that come out of the printer look incredible (and are stickers!) and the Hyperphoto feature is a fun trick to share with friends. While it would be nice not to create an account to use Lifeprint, once you're in, it's super easy to print your photos. Photos with friends make amazing mementos, and everyone will love seeing them come to life.

If you're seeking out the perfect photos to print, click HERE for the best selfie angles for all of your social media shots.