Lilly Say, perhaps better known by her pseudonym Hilda Poppitt, is the 17-year-old author of the children's book Sugar and Spice and All Things Nice! 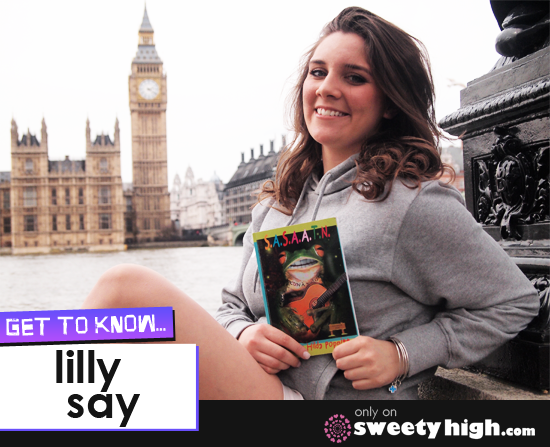 We recently spoke with the young writer about inspiration, her alter ego Hilda Poppitt and her literary plans for the future!

Lilly Say told us that she only recently started considering herself a writer.

"Maybe Christmas it sort of sunk in," she said.

But Lilly has been a storyteller for most of her life.

"I've got three little sisters," she said. "I'm the oldest so I've always been telling them little stories and writing things down if I think of a good one, and telling it to them when I get in."

She was just 11 when she wrote Sugar and Spice and All Things Nice, also known as S.A.S.A.A.T.N. The story was written for a school assignment.

"I thought I was just going to hand it to my teacher, she was gonna mark it all up with a red pen, and that was gonna be it," Lilly said. But the story would go much farther than that.

The stories were inspired by Lilly's own experiences creating adventures with her family.

"My auntie used to look after us quite a lot, and we used to go on adventures in the forest," Lilly said. "That was where she actually lived in the book. We used to do that a lot and I just took one of the adventures one day and sort of twisted it into this magical story."

She modeled the story after her favorite genre, fantasy.

After Lilly submitted her story to her teacher, she didn't think about it again for a long time. But five years later, a discovery by her mother helped the story come back to light.

"When I was 16, my mum saw this advert for Puppy Print in a magazine, so she sent it off, doing her mum thing," Lilly said. "She thought it was brilliant. I went along with it. I didn't really think anything of it then."

But her submission was not ignored. As soon as she came back from her summer holidays, she received a call from the publisher.

"They said 'We really like this, we'd like to pick it up and take it somewhere,'" Lilly said. "It was a bit of a massive gap between the writing and the publishing."

At the time, the publishers decided it would be best to keep Lilly's real identity a secret to allow her to focus on exams and not get dragged into publicity.

Instead, the pen name Hilda Poppitt was created.

"Hilda is the name of the publisher's nan, or grandma as you'd say," Lilly explained. "And they were eating these sweets called poppets. They're like little bits of toffee and chocolate. The name Miss Hilda Poppitt came about pretty quick."

Soon, people were assuming that Hilda Poppitt was a little old lady!

Lilly said that the experience of holding her published book in her hands was surreal.

"It was wicked," she said. "It took a while for it to sink in, because it looked like a proper book. It didn't look like a little story from year 5, but an actual book that you'd buy and read."

She said it was one of the major achievements in her life. She has also deeply enjoyed hearing back from fans of her writing.

"That's probably my favorite bit," she said. "When kids come up and go, 'We really liked it, what happens after this bit?' or "What song did he sing after this?' or 'How did you think that up?'"

Most recently, Lilly's book was nominated for the Spring 2014 People's Book Prize. When that happened, Lilly had to come clean about her real identity!

"Recently, people are finding out about it," Lilly said. "I'll be in school and I'll hear 'Hilda!' across the playground. My sisters call me Hilda at home, too."

Lilly said it's an honor to be considered in the awards.

"That's pretty cool because David Walliams won it last year," she said. "I would be like coming up to his league, and he's quite big."

Lilly aims to continue the series to keep her readers satisfied. Her next book, Always Believe, will be out around Christmas 2014.

"It's the same sort of adventure story," Lilly said. "We're at my auntie's again, but instead of going to the forest, we take an adventure in a loft, where a lot of magical stuff can happen."

We can't wait to check out Always Believe! Follow Lilly on Twitter @lilly_say and on her Facebook page here, and be sure to join us at SweetyHigh.com to tell us about your favorite young authors!