Lily Born Dishes On The Creation Of Kangaroo Cups!

Lily Born is the 11-year-old creator of the spill-proof, unbreakable Kangaroo Cup, which she developed to help her grandfather with Parkinson's Disease. 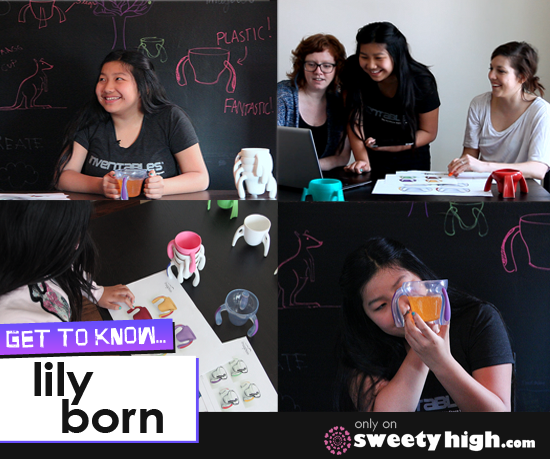 We recently spoke with the young inventor about her inspiration, the process behind Kangaroo Cup's creation and more!

The creation of Kangaroo Cups was first inspired by Lily's grandfather and his struggles with Parkinson's Disease.

"He was shaking a lot, and he often had trouble picking up and putting down cups," Lily explained. "He was spilling a lot and my grandma was having to clean up after him a lot."

Much of the time, the spills happened not when Lily's grandpa was holding a cup, but when he'd knock over a cup that was sitting on a table.

"That seemed to be the biggest problem, so I figured legs that made it harder to tip over would be good," Lily said.

Kangaroo Cups were built to suit Lily's grandfather's needs in a few ways.

"If you want to not fall over, its good to spread your legs apart," Lily explained. "When my dad asked me how we could make a cup not spill over, I spread my legs apart to show him how I would keep from falling over. That gave me the idea for putting legs on the cup."

That way, if someone hits the side of the cup, it'll slide rather than tipping over.

It was a long process from the creation of the first Kangaroo Cup to the product being produced in a factory.

"First we made the plastic cups," Lily said. "That only took a couple days because the plastic would cool (and get solid) in just a few minutes, so it was easy to do a lot of experiments with different shapes and grampa could test those, and right away you knew if it was working or not."

After the initial plastic Kangaroo cups for Lily's grandfather were made, the idea rested for a while.

But it wasn't before long that Lily saw that spills were more universal. For example, her dad would accidentally spill coffee on his keyboard.

Lily's newfound interest in ceramics was another big step for Kangaroo Cups.

"My Aunt Kate was taking me to a pottery studio to make cups and vases and so I figured I could make my dad a no-spill cup like the one I made for grampa except in ceramic," Lily said. "My dad loved it and used it every day, and one day he asked me if I wanted to make it for production, and I said sure."

Manufacturing ceramic Kangaroo Cups was a lot of hard work.

"We knew it had to be perfect if we were going to try to sell it to people, so we did a lot of different version with different legs," Lily said. "That was a lot of work because each set took hours to make and over a week to get back."

Lily and her dad continued this process for months until they created a product they were completely satisfied with. They then traveled to China to seek out a factory and build molds.

Now, Kangaroo Cups are taking another big step forward with a new break-free plastic design. But manufacturing plastic cups is a lot more expensive than making ceramic ones, so the Kangaroo Cup team launched a Kickstarter campaign!

Lily's amazing story and her campaign have been featured in Business Insider, the Daily Mail and more, and with nearly a month to go, they are well above their original $25,000 goal!

"I don't know what to say," she said of the accomplishment. "There's just so much good stuff  happening!"

Lily said she owes part of her success to the ingenuity she has as a kid.

"I don't think most grownups have a lot of imagination," Lily said. "If you don't have imagination, a kid's ideas just look weird. I think that's the way a lot of adults look at kid's ideas."

She added that adults set a lot of rules for themselves, and that they're afraid to break them.

"If you break the rules, well that's a mistake," she explained. "To adults, kids make mistakes and have weird ideas. They don't realize that some rules are stupid and some weird ideas are good."

She advises other aspiring entrepreneurs not to be afraid to think like a kid.

"Don't be afraid to make mistakes, because you will make a lot of them," she said. "And ask for help. You can't do it alone. You'll need grownups to help you."

Still, coming up with an awesome and creative idea can be a real challenge.

"Don't expect it to always be fun," she said. "I really love the Kangaroo Cups, but some days I just want to finish my homework and watch Youtube. An invention means a lot more homework, so sometimes it's pretty hard."

What has been Lily's most rewarding experience throughout her work on Kangaroo Cups?

"People telling me the cups have helped them," Lily replied. "My grampa loves his cups and whenever I hear someone loves them or they are helping them, that makes me very happy."

Stay updated on the latest from Kangaroo Cups by checking out their social pages below! You can also tell us what you think of the story in the comments below and join our community at SweetyHigh.com to tell us about young women making a difference in the world!