Lily Eliana Walsh is the 14-year-old director behind an ad for SmartyPants Vitamins that has gone viral. She got her filmmaking start with the support of Adolescent Content, a production company that represents and mentors young directors for work in advertising, television and films. 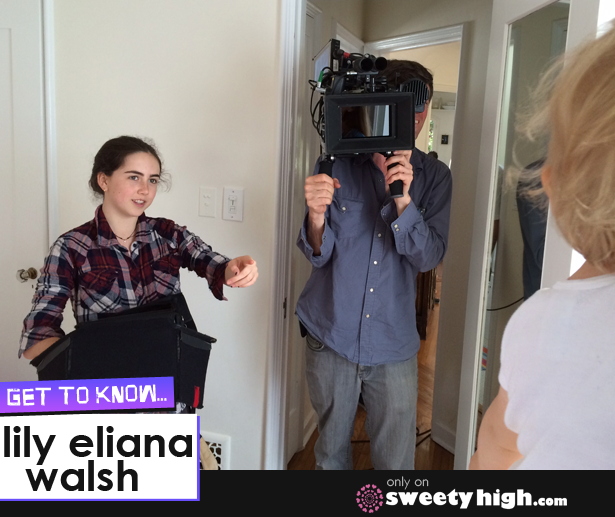 We recently spoke with Lily and some of the people involved in her commercial debut about her experiences as a young director and much more!

Lily Eliana Walsh first got interested in photography when she was about 11 years old. Her friends were all fans of Instagram, which also piqued Lily's interest.

"I just used my mom's iPhone and spent a lot of time in my garden taking photo of leaves and flowers and nature," she said. "When I got my own account, I started capturing everything in the day and everything that I loved, and I really just discovered how much I loved capturing moments so I could look back on them."

Within a year or so, Lily got a professional camera, which allowed her to take higher quality photos.

"I was interested in seeing how great the photos could come out," she said.

It wasn't long before she stumbled upon the ability to capture video with her camera.

"I discovered how much more amazing it is that you can capture a moving moment," she said. "It was even better than a still photo. Even though I still love taking still photos, I just love capturing moving moments."

Since she was little, Lily had also loved making up stories in her head and drawing them out on paper. Video finally gave her the opportunity to make something more of those stories.

Ramaa Mosley, a family friend of Lily's, is the creative director at Adolescent Content, which mentors and empowers young directors from 13 to 25 to create incredible content.

"After I'd been working with her for a little bit, she came up with Adolescent," Lily explained. "Since she'd already been mentoring me, she asked me if I'd like to join."

Lily was happy to oblige. Since then, Adolescent has continued to grow and mentor a number of young directors.

"Adolescent is all about a new wave of young filmmakers capturing moments that only young people can capture, because they're really living that experience," Lily said. "They're not just somebody who's trying to capture young experiences, they're actually living them."

Furthermore, they're offering invaluable practice in the field to young people.

"It's also a really great experience and a really great opportunity for young people who know they want to be filmmakers to get a head start," Lily said.

Hope Farley, executive producer at Adolescent Content, has also helped Lily along every step of the way to achieve her vision.

"The cool thing about Adolescent is that we're presenting these young directors on the same playing field as directors who have been established and doing this for years," Farley said. "The whole idea is that they should be doing the work that's geared toward them."

For a year, Lily spent a lot of time filming her friends at parties and hanging out. Mosley helped Lily to put the footage together into a reel on Adolescent Content's website.

When representatives from SmartyPants Vitamins stumbled upon Lily's reel, they were immediately interested in what Lily had to offer as a director.

"They liked my eye and my vision, and Ramaa told me they were interested in having me make a commercial for them," Lily said. "Right away I wanted to do it because I knew it was going to be a great experience."

SmartyPants sent Lily a script and she got to work.

"I read it over and really liked it, and I knew it was going to turn into something great," she said. "I added onto the script and I wrote the shot list and I wrote what I thought the cast should be, and props and clothes and all of the shots I wanted in certain locations."

Preparation for the shoot took about two weeks.

Next, Lily and the Adolescent team sought out locations to film. To keep within tight budget constraints, they stuck mostly to filming in their homes. Casting was handled by Maryclaire Sweeters, who had worked extensively with Ramaa Mosley in the past.

Lily admitted it took her a moment to fully embrace the role of director onset.

"The filming process was really hard for me at first because I had never done anything like that," she said. "At first I didn't feel comfortable telling people what to do, but as the day went on I really felt more comfortable with it and I realized how amazing that I was getting the opportunity to actually direct a commercial when I was only 13."

And despite the challenges and all of the hard work it took, Lily said she had a ton of fun in the process.

"Lily was amazing," Farley said. "Despite this micro-budget, we were given access to a lot of really great crew and cast, and going through the entire experience, everything was incredible."

The finished product is sweet, heartfelt and succinct. The SmartyPants Vitamins ad has garnered a lot of attention, including an article in Adweek titled "Can a 14-Year-Old Make a Better Vitamin Commercial Than a Pro?"

"I saw that Adweek thing and I was just really amazed that people noticed me that way," Lily said. "This is all so new, and it's all happening at once. In a way it's overwhelming but it's really cool. I'm really excited about this."

"The SmartyPants ad was great in that it's a beautiful spot and people were able to see what a 13-year-old could do given the opportunity," she said. "It's opened a lot of doors, and there are tons of other advertisers that are interested in Lily and our other directors."

We asked Lily if she thinks that teens are potentially better directors than adults.

She added that, although adults have more experience, experience isn't always the missing ingredient in great content.

"Teens have the eye of other teens in a way, so instead of an adult trying to capture teen experiences, 13, 14 and 15-year-olds are living that," she said. "They can go into their world and share moments that are happening in real life."

Lily is keeping her prospects for the future open.

"I don't have anything specific in mind for future projects, but if something comes up that really connects with me in some way, I'll be excited to sign on," she said. "I don't know what I want to do when I get older, but right now I know filmmaking is my passion and I'm really excited for whatever comes next."

Farley added that Lily is currently up for a number of projects.

"It's really exciting for us to see how the industry has responded positively to the idea," she said. "Lily is so special because she was our first director who went through this whole process with the brand and proved the idea. We always had faith, but Lily was a trailblazer in that she opened the eyes of the advertising world, and everyone is standing up and taking notice."

We absolutely can't wait to hear about Lily's next great project!

Check out Lily Eliana Walsh's SmartyPants ad and follow Adolescent Content's social pages below! You can also share your own filmmaking with us at SweetyHigh.com!