Lisa Cimorelli: What Girl Power Means To Me

I think girl power is all about strong women who stand up for themselves, who know who they are, who respect themselves, and women who celebrate what it means to be a woman. 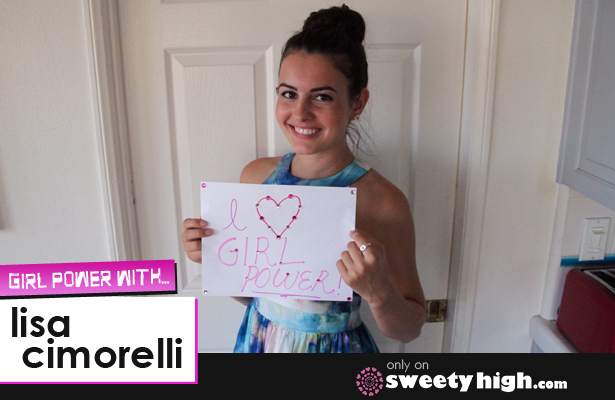 You don't have to be a man to be strong and respect yourself. It's about celebrating your femininity and being a woman, but having strength. I just love that so much. Day-to-day there's a lot of challenges in the business world, and working in the music industry. That can be very intimidating and scary, as a young girl, to be facing grown men who want to tell you to do, or who to be.

I just saw the movie Divergent three times over the weekend, and I was so inspired. That movie was full of girl power. Tris seemed to have a lot of self-respect, and when people would try to push her around or take advantage of her, or tell her that she couldn't do something, she just didn't care. She really stood up for herself and respected herself a lot. She didn't exploit herself at all. She was very strong with herself and what she wanted to do with her life. She was also very brave in the face of adversity, which I found very admirable.

Sometimes it's really hard for me to say, "Well, I actually want to do this," or "I disagree," or just to speak up for myself, especially because I'm not a very confrontational person. But I've learned how to do that. Just learning how to stand up for myself and respect myself has been one way that girl power has been very important in my life.

Lisa Cimorelli is a member of Cimorelli, a group of six singing sisters that has achieved recognition across the world thanks to their powerful voices and gorgeous harmonies. Lisa is the third oldest sister, and plays keyboard, drums and guitar with the group, on top of arranging harmonies with older sister, Christina.