"Cheese tea" may sounds strange at first, but when you find out the drinks are topped with a foamy cheesecake-like topping, it starts sounding a lot tastier.

These unique teas are taking over in China, Taiwan and Malaysia, and now spots are starting to pop up in the U.S., too. But the Little Fluffy Head Café in Downtown Los Angeles isn't satisfied with sticking to the script. On top of serving delicious cream cheese-topped teas, they also make drinks with crème brûlé, tiramisu and even cheddar cheese toppings.

I recently stopped by the shop to chat with Little Fluffy Head founder Jenny Zheng about the story behind the café and the origins behind her one-of-a-kind tea flavors. She was also kind enough to make me four different teas— including the bizarre Chedd-cha Matcha—so I could see what all the fuss was about.

Jenny Zheng told me that she discovered cheese tea while visiting China after finishing a graduate program at UCLA.

"It was 2015, and cheese tea was just getting popular in China then," she said. "It hadn't even spread to the rest of Asia, yet. I visited a big cheese tea shop there and instantly fell in love with it."

Jenny had always been interested in opening a boba tea shop in the states, but now she knew what could differentiate her shop from anything else out there. Some research revealed that there weren't yet any other cheese tea shops in the U.S., so she began planning her own business.

She found cheese tea recipes online, comparing and contrasting recipes and trying them herself until she was able to produce the perfect flavors.

"Then, once I had my first cheese tea recipe, I started experimenting with different cheeses, as well as ingredients besides cheese, and that's how I developed my drinks.

It took some time, but Little Fluffy Head Café opened in August 2017 in Downtown Los Angeles. A year later, they're still coming up with their own unique inventions. When it came time for my taste test, they made me four of their most popular drinks.

I've always been a fan of jasmine green tea. The deliciously fragrant floral quality of the jasmine is gentle but never gets lost in the rest of the drink—and this gets even better when you top it with a layer of cheesecake cream. The taste of sweet cream cheese paired beautifully with the floral tea, making it especially drinkable on a hot summer day in L.A. It's one of the lighter cheese teas on the menu, and Jenny Zheng says it's one of the most popular drinks with new customers who are curious to try the cheesecake cream. 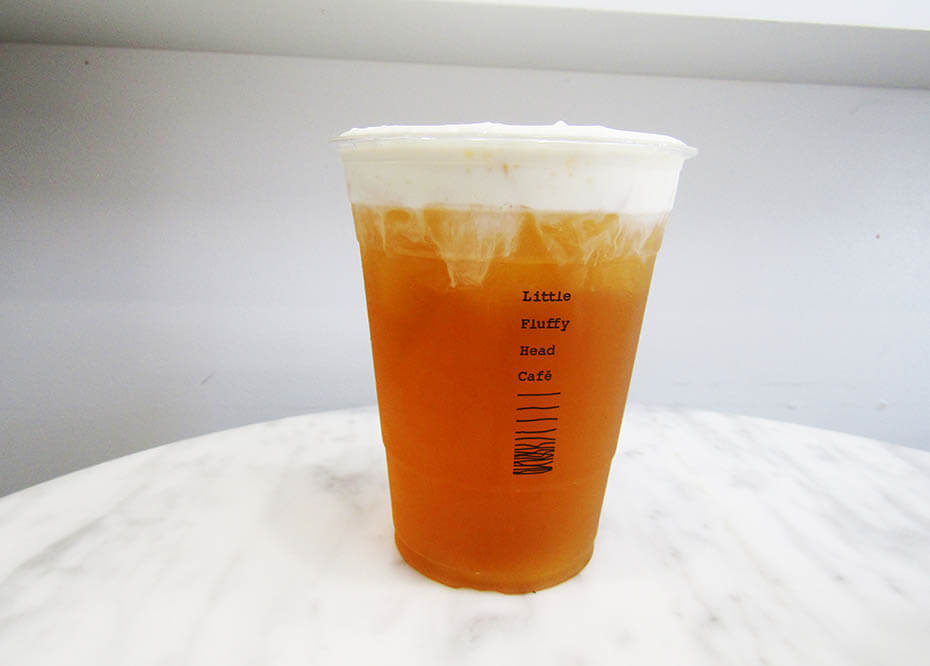 The Dirty Mess milk tea (pictured here on the right) is actually a crème brûlée tea, rather than a cheese tea, but that doesn't make it any less decadent. It's a black milk tea topped with tasty crème brûlé cream, as well as crushed Oreo cookies. The overall effect is a sweetly tempting dessert tea, with chocolately notes throughout. If you're on the lookout for something extra rich, this is my recommendation. 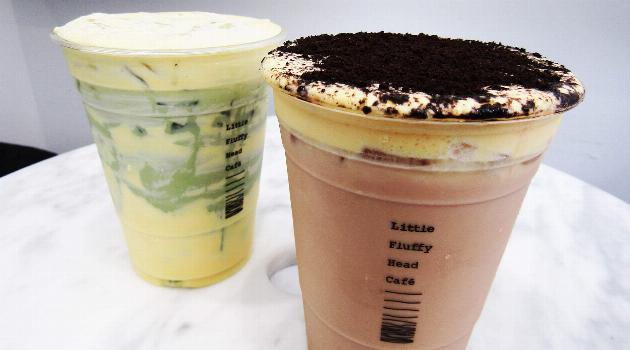 Little Fluffy Head's Camouflage Matcha (pictured on the right) is as much about the appearance as it is about the taste. Layers of a chilled matcha latte are sandwiched between layers of crème brûlée cream, creating a striking visual through the side of the cup. But it tastes great, too. The matcha tastes earthy and bright, while the foam adds a creamy sweetness. If you normally find matcha too overpowering, you may want to try this out and see if it changes your mind. 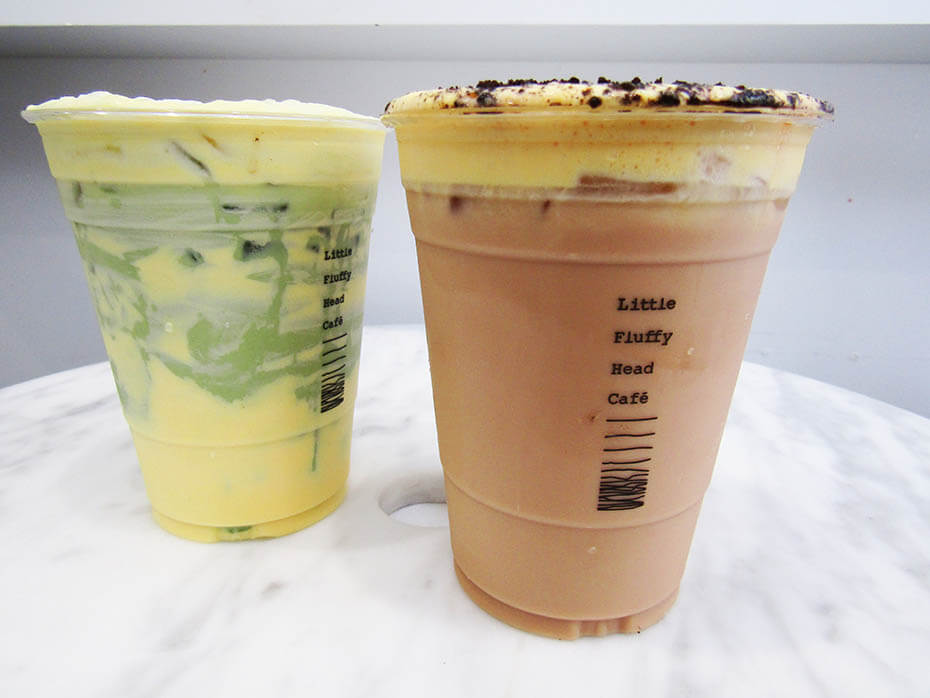 This drink will not be for everyone. Unlike the other cheese teas from Little Fluffy Head, this drink's cheese is actually white cheddar. As weird as it sounded, I was curious to give it a shot and was pleasantly surprised by the taste. While the cheese is a little pungent and salty, it's offset by a sweetness in the cream. Paired with the strong flavor of matcha, it isn't overpowering at all. The complex flavor might not delight all palates, but I would absolutely try it again. The cheddar cheese cream is actually Jenny's favorite, though she prefers to pair it with a strong black tea. 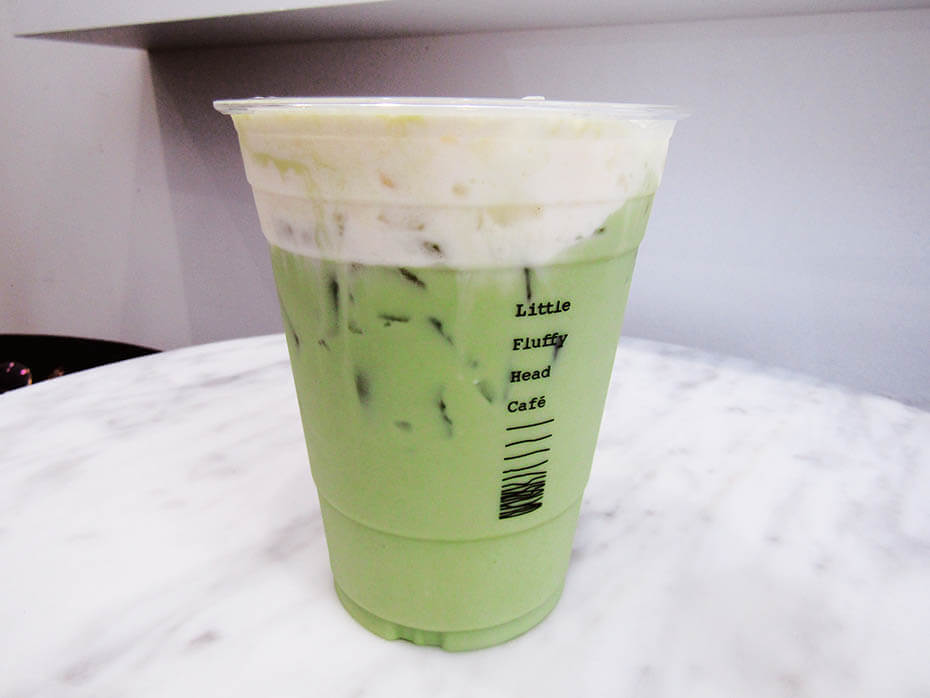 Love cheesecake? Click HERE for a definitive ranking of The Cheesecake Factory's cheesecakes.