Lovey James is a singer-songwriter from Portland who got her start in competitive dancing. She recently released her latest single "Rollercoaster," as well as a music video for the track! 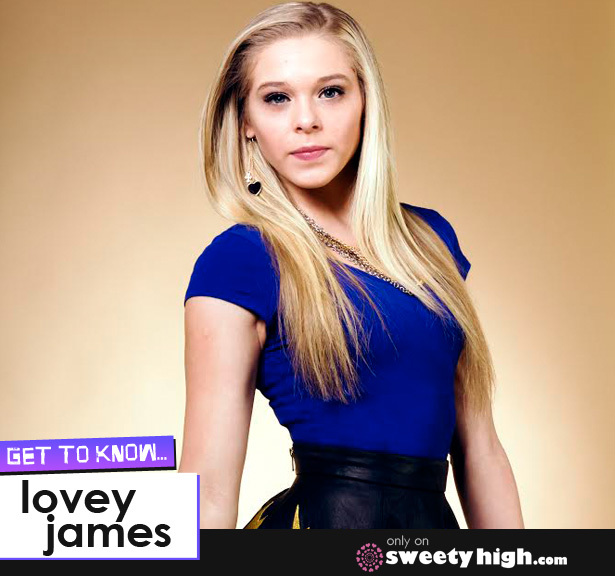 Lovey recently spoke with us to dish on how she became the artist she is today, as well as her original songs and what we can expect from her next!

Lovey didn't get into making music until she was about 14. Before that, she was a competitive dancer for 7 years.

Lovey never realized she could sing until her dance coach recommended that she take a voice lesson when she was about 8. Before long, she she was entering the musical category in dance competitions and, to the surprise of both Lovey and her mom, she won.

By the time she was 14, she decided that she wanted to move beyond just dancing.

"I wasn't really thinking about doing anything serious with music, but I started building some confidence in my singing and I entered some vocal competitions in my local town, including Hillsboro Teen Idol," she said.

Lovey's dance and vocal coach used to be on Broadway, and all of her training reflected her coach's experience.

"I did this competition and I actually won, singing Broadway-style," Lovey said. "I sang 'Good Morning Baltimore' from Hairspray, which was so weird just because I had some friends who were doing the competition too and they were singing Katy Perry and Miley Cyrus, everything on the radio."

She was pleasantly surprised that she could win with her own unique style.

From there, she advanced to Portland Teen Idol, where she was encouraged to drop Broadway singing and try out pop.

"I was super nervous just because, I listen to the radio, but I never really thought about singing onstage in a pop style," she said. "But I learned to love the genre and I kind of fell in love with pop."

Though she didn't win the competition, one of the judges took notice of Lovey's talents and asked her to try singing in a studio setting.

"I was so shocked, just because I'd literally never done anything before, besides Broadway songs onstage and now I was being asked to record in the studio," she said. "I was so excited."

Lovey got some help writing her very first song. As she built more and more connections, she was eventually introduced to her manager.

"He has gotten me so many cool gigs, and I was on tour last year," she said. "Honestly, I never thought that this is what I'd be doing, but I'm so thankful that I get to do it now."

"Rollercoaster" her latest single, was the first song that Lovey wrote in California.

"I had been writing inspirational music and sharing my messages to my fans through songs," she said. "For 'Rollercoaster,' I wanted to write something that was really upbeat and really catchy and, honestly, something I could dance to, just because I was a dancer."

She was excited for the opportunity to showcase some of those dance moves in the music video, which fas filmed in her home state of Oregon.

"It was so cool because I got to invite a whole bunch of my friends and family," she said.

Some of Lovey's fans even got to appear in the music video during a flash mob scene.

"I thought it was so much fun," she said. "We rented out a theme park and got to ride some rids. And then some of my friends from California got to come out."

Among those friends was Vine star Dylan Dauzat!

"He had to ride the roller coaster so many times that he actually got sick," Lovey said. "But the video was really fun. I had a blast filming it."

Lovey is also an anti-bullying advocate. She attended public school from kindergarten until her freshman year of high school, but her family sometimes ran into problems with the school district, because she was missing so much school due to her musical career.

"I had straight A's and I was a really good student, but I started missing so much school that they were actually starting to charge my mom $100 for every day I was missing," she said.

That wasn't a sustainable solution, so Lovey and her mom decided to turn to online school.

"In school I had a lot of friends and a lot of support, and it wasn't until after I left public school that I started getting teased and made fun of," she said. "It didn't make sense to me just because I never really had to deal with this before. It was something that I thought happened inside of schools."

It was difficult for Lovey to understand why her friends had quickly turned on her and started making fun of her for pursuing her passion of making music.

"It was really hard for me because I couldn't take it in," she said. "I didn't understand why it was happening. Thankfully I had a big, supportive team behind me and very loving parents."

It also helped Lovey to turn her experiences into songs.

"I wanted to not only share my experience about what happened, but also share an inspiration message with my fans."

Her first song, "Who You Are" was written to inspire people.

"Basically it's letting everyone know you are who you are and it's not worth trying to change it or trying to fit in or be something you're not," she said.

At the moment, Lovey's biggest musical influence is Ariana Grande.

"I love her because she's a talented female artist who's so humble," she said. "I feel like in my generation, it's hard for female artists because fans are young girls and they're looking for a cute boy to fangirl over. It's definitely hard to stand out and find something that girls are interested in."

Lovey said that she's only recently found this own spark within herself, and that the secret to her success is inspiring people. Lovey sees the same quality in Ariana.

"I really appreciate how close she is with her fans, because I feel like all these big singers and actors and actresses really owe a lot to their fans because social media is really big nowadays and that's where the fans come in," she said. "I look up to her and I really love her style, as well."

She also admires Katy Perry for her ambition and Adam Levine's musical style.

Lovey plans to release the music video for her next single sometime this month. She recently filmed it in California with her friend, Jonah.

"The video was actually super cool, because one of my favorite candies, Skittles, actually sponsored the video and they gave me bags and bags of Skittles," she said. "I don't think I can ever look at a Skittles bag again! But it was so cool to be able to have my favorite candy on set and that was super fun."

She loved getting to wear a bunch of great outfits and get her hair and makeup done for the perfect look.

"That's like a dream come true for me," she said. "I've always loved filming videos.'

Lovey also has a few upcoming shows, including a halftime show for a soccer game in Seattle and another in Spokane, Washington.

"Then, this holiday season I'm just planning on spending it with my family," she said. "Then come January, I'll be back on tour!"

For the latest updates on Lovey James' music, be sure to check out her Twitter and Instagram! You can also join our community at Sweety High to share your own musical story with us!