I loved the original Luigi's Mansion, so when I heard that a third installment was coming to the Nintendo Switch, I knew it would be a must-play.

After checking it out earlier this year at E3, I became even more convinced that it would be a gem. Nintendo was gracious enough to send me a review code of the game, and now that I've played it, I can easily say it's one of my favorite Switch games of the year. Here are six reasons why.

It Has the Perfect Setup for a New Luigi Adventure

Luigi's Mansion 3 begins with Luigi, plus Mario, Peach and three Toads, on a lively bus trip through the countryside. Luigi and co (plus Luigi's ghostly dog pal, Polterpup) have been invited to stay at an elegant and extravagant hotel as VIPs, and they await a vacation full of rest and relaxation. 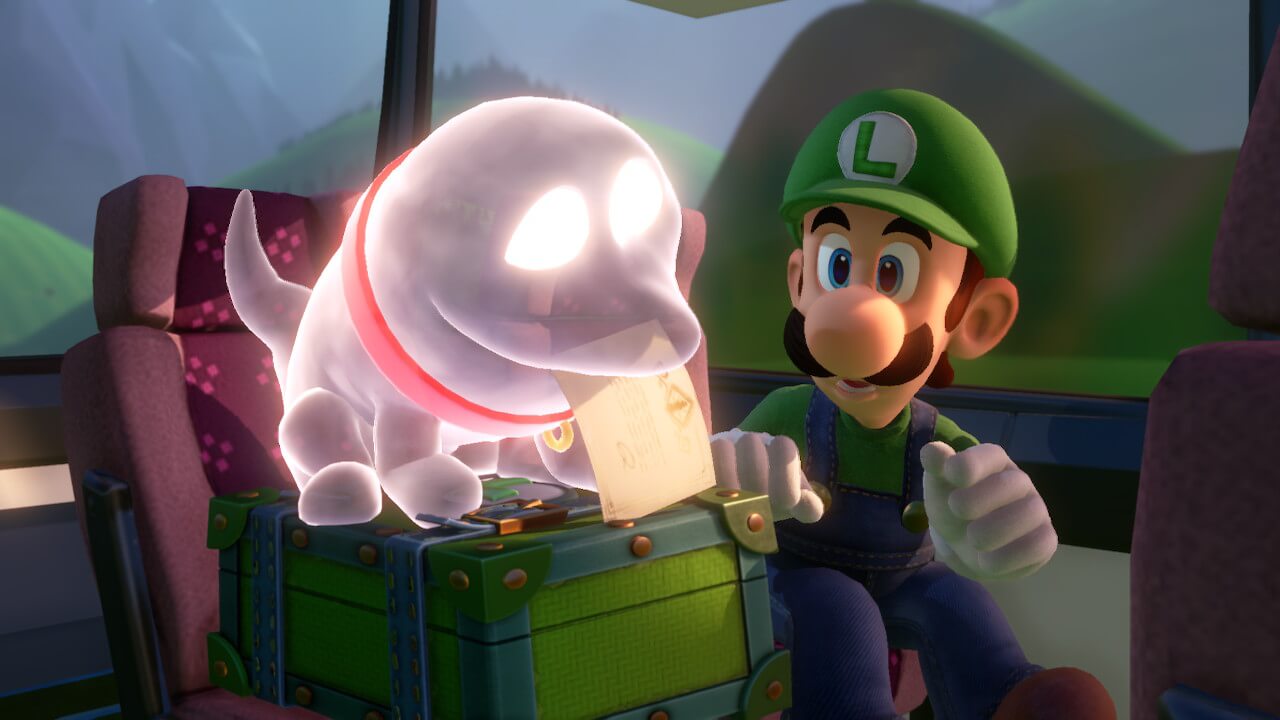 Of course, things aren't quite as they seem as the group arrives at the ominously named The Last Resort. Though they receive a warm welcome upon check-in, the staff are clearly ghosts in masks, and there's definitely something off about their host, Hellen Gravely. When Luigi inspects his room, it's warm and brightly lit, but he quickly doses off.

When Princess Peach's shriek suddenly wakes him, he finds the room is suddenly dark, frightful and booby-trapped. It turns out that Hellen Gravely has lured Luigi and his friends there as a gift to prove her loyalty and admiration to the evil King Boo. He's already trapped all of Luigi's pals inside of paintings, and Luigi is next. 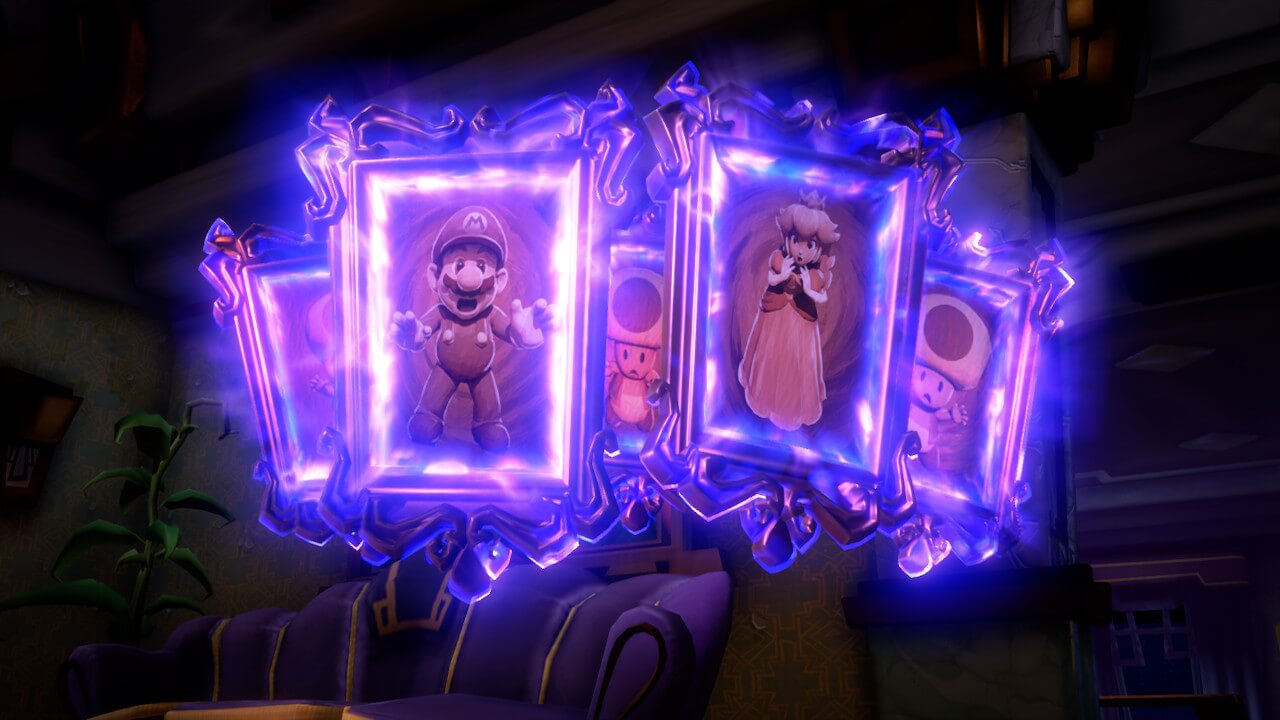 Luigi's lucky that he's no stranger to haunted destinations, and it's not long before he's armed with a number of handy tools, including a ghost-busting vacuum. They're exactly what he needs to explore the hotel floor by floor, rescue his buddies and end King Boo's reign of terror. 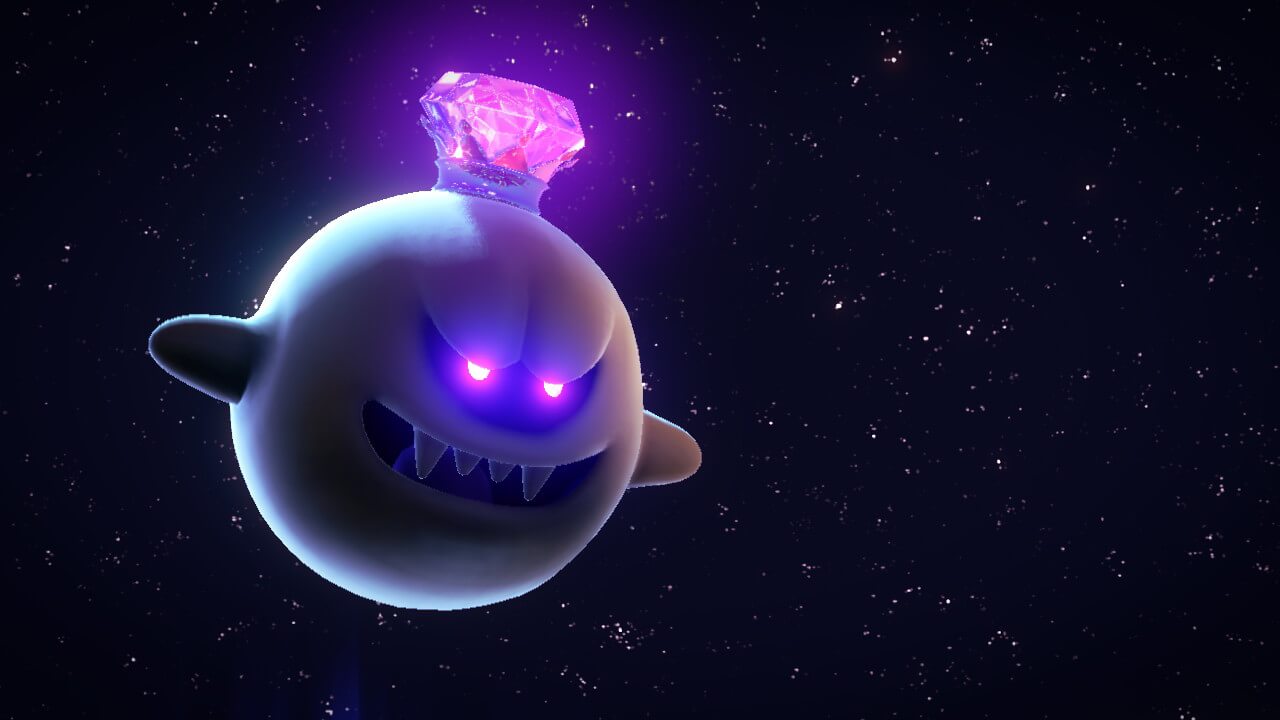 Once Luigi gets control of the handy Poltergust G-00 vacuum, developed by his old pal Professor E. Gadd, the controls start feeling quite familiar to anyone who's ever played a Luigi's Mansion title. With the press of a button, you can flash a burst of light to stun enemies, and your vacuum can be used both to suck up ghost and objects, and to blow out air. Some large objects that can't be sucked down will also block the hose, but by blowing on them, they can be converted into projectiles for attacking enemies or messing with the environment to unlock secrets. There's also a Dark-Light flashlight, which can be used to illuminate invisible secrets (and sometimes fight enemies) that are hidden throughout the levels.

But it's the new additions that add an extra layer of depth to the game. The Burst can dispel enemies and send objects flying, or allow Luigi to leap over approaching attacks. The new Suction Shot move sends a tethered plunger flying, which can then be grabbed to whip items and even baddies across the room with ease. With all of these skills in his arsenal, Luigi has a unique approach for any problem that may come his way.

But my personal favorite, mechanics-wise, is the addition of the gelatinous green Luigi lookalike, Gooiji. Though his inclusion might seem weird at first, he's absolutely critical to the gameplay and basically doubles the opportunities available in the game. Gooigi can do basically everything Luigi can, except unlike Luigi, Gooigi can fit through tight spaces, slip through grates and safely step through spikes. However, he has less health, and he dissolves the second he touches water. 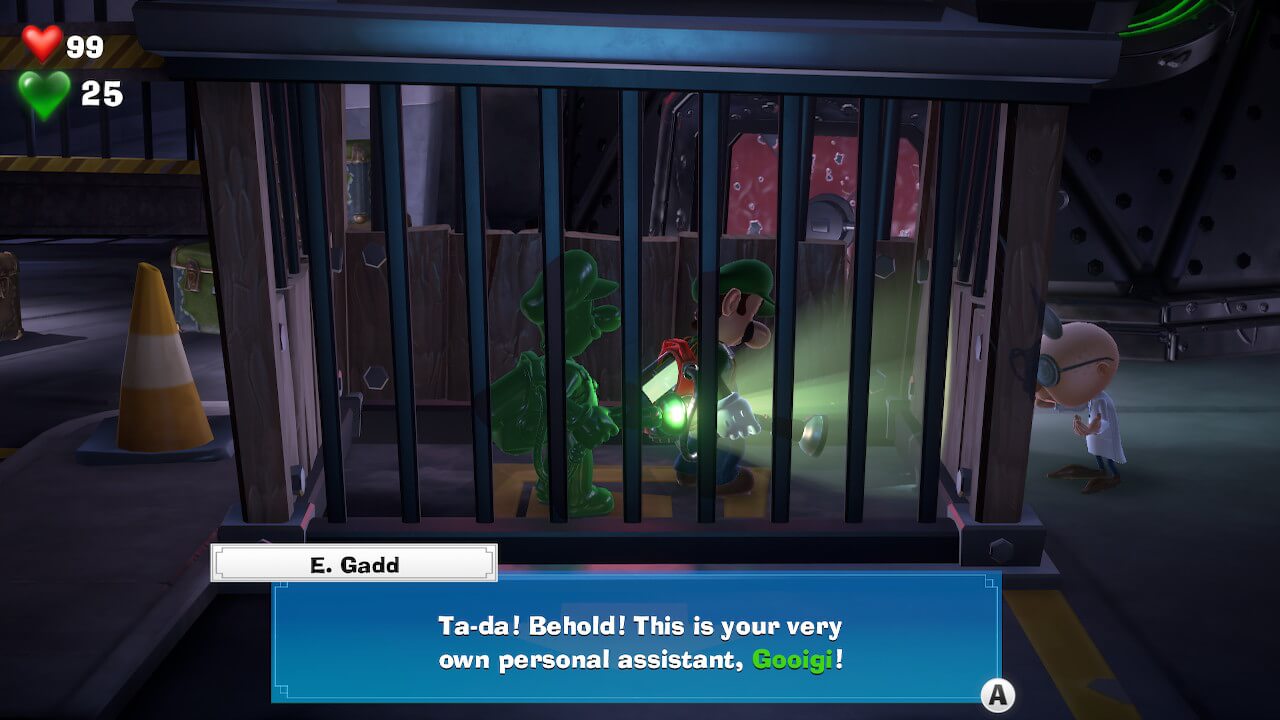 Players can swap between Luigi and Gooigi at any time once the character is introduced, or even have a friend take the helm as Gooigi. Sometimes, you'll simply want him around to step on a switch or pull on a rope so you can access a hard-to-reach area. Other times, his unique skills are essential. One epic boss bottle, in particular, requires carefully swapping between the two characters to work in tandem in different areas, and I found it to be one of the most thrilling parts of the game.

You're going to be hunting a lot of ghosts in Luigi's Mansion 3, but that's exactly the way I like it. In general, fighting ghosts involves using a flash to stun them before using the vacuum to suck them up, depleting the ghost's health as it attempts to drag you across the room. Once you've really got a grip on the ghost, the game also lets you press a button to flail the ghost around, causing lots of damage and also potentially whacking any other ghosts in its wake.

Then things get more complicated. Maybe a ghost is wearing a bucket over its head, or slick shades, so the light won't affect it, and you have to get creative. Later, there are tiny ghosts, giant clobbering ghosts, door-blocking ghosts and projectile-throwing ghosts, so you always have to pay attention and know who you're facing. And then there are the bosses—but I'll get to them later.

Going After All the Secrets Is a Huge Thrill

In the Luigi's Mansion series, Luigi tends to find money everywhere, and for some reason, I've always found suctioning up every coin, dollar bill, gold bar and pearl one of the most delightful things about the games. Basically everything they stuff into the rooms is interactive, from chandeliers to potted plants, curtains, dressers and toilets. If it's there, chances are that you can mess with it in some way and either nab some money or find a secret.

It's so fun to explore and find things that I never once left a room without making sure every last bit of money had been claimed, every box had been destroyed and every piece of cloth ripped from the beds or walls. When one level introduced a furniture-pulverizing buzzsaw, I was in heaven. 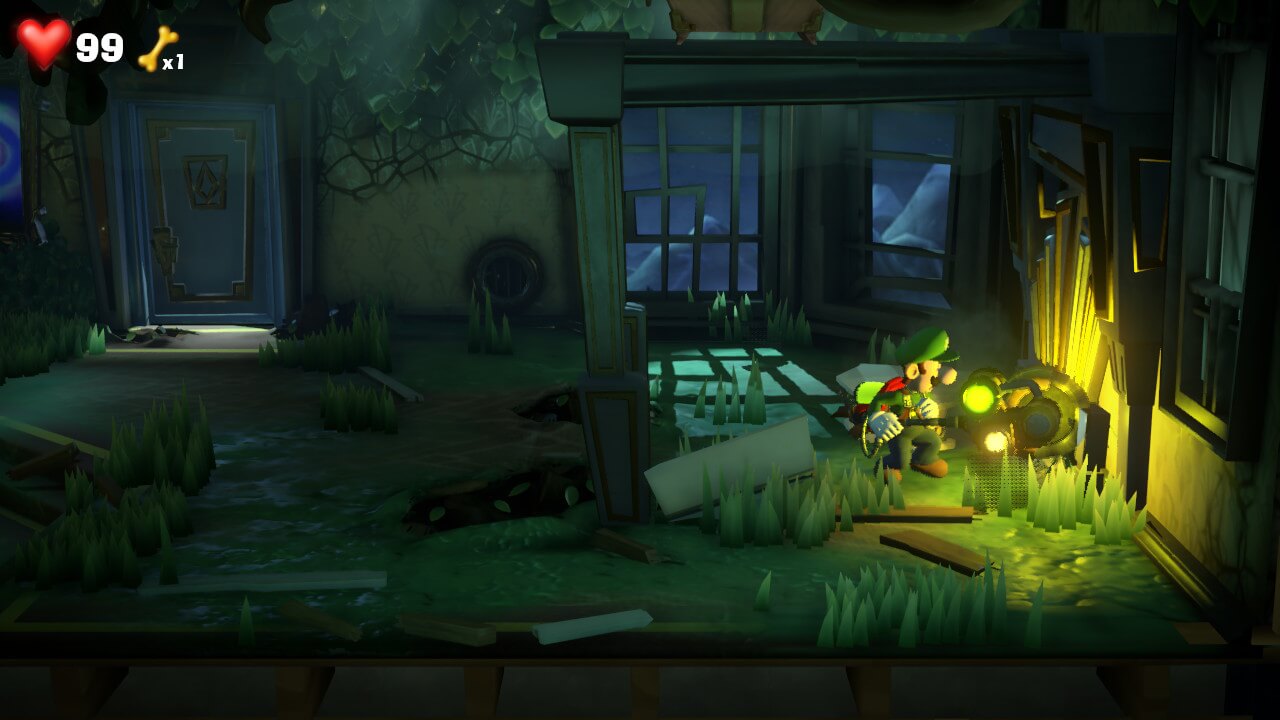 Each floor also has six hidden gems tucked away somewhere, and they'll only reveal themselves to you if you're incredibly thorough and thoughtful in your exploration. There's also a Boo minion hidden somewhere on each floor, but they'll only appear once you've beaten the local boss and returned, so they're for players who really want to get things done right. This also provides an awesome opportunity to see areas with fresh eyes and locate secrets that you weren't in the right mindset to find earlier. 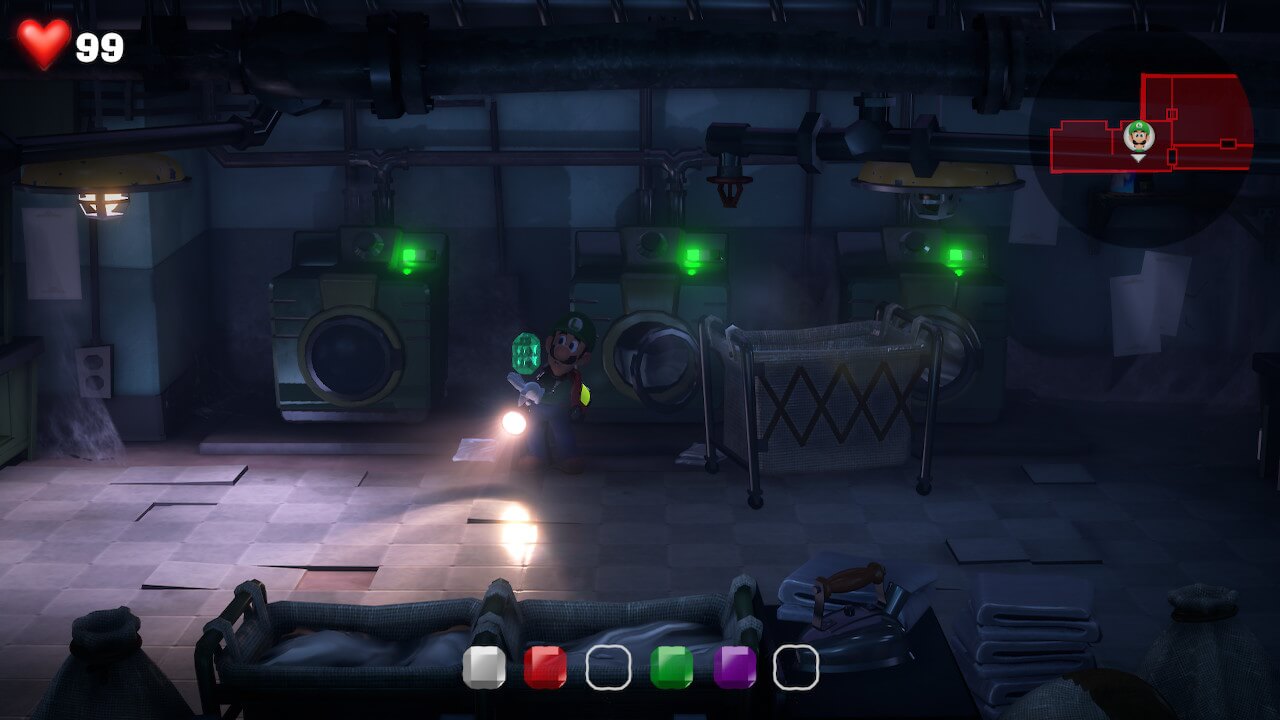 And if you're ever struggling with a tricky boss, or just to find a pesky item, you can also trade in your hard-earned cash for gold bones, which are basically an extra life, or cartridges that will help you locate the gem or Boo that's eluding you.

In fact, so much of the content in this game is optional that it's fully possible to blaze right through it without finding any of that stuff. There are many areas you might never discover unless you're being a bit of a completionist. However, I've always found being thorough to be the more exciting—and rewarding—option.

The Hotel Is So Much More than a Huge Haunted Mansion

Luigi's ghost-fighting journey has never been more gorgeous than in Luigi's Mansion 3. Absolutely everything is lushly detailed, and it's clear that a lot of time and expense went into making every location come alive with detail. The hotel has 15 floors, plus two basement levels, and each one has its own theme. You're not just exploring variations of the same haunted house over and over again. The hotel has all the stuff you'd expect, such as a dining mezzanine, a mall, the high-rise VIP suite and a fitness center (but spooky!) as well as floors themed around Egyptian pyramids, pirate ships and a Scottish castle. Every one of them looks and feels unique and offers something fresh to the gameplay.

Each floor is made even more memorable with an incredible boss fight, perfectly themed to the area. On the museum floor, you'll fight a caveman ghost controlling the body of a T-rex skeleton, the garden suites are curated by a ghostly gardener, and one magic-themed floor ends in a battle against triplet magicians with a number of tricks up their sleeves. 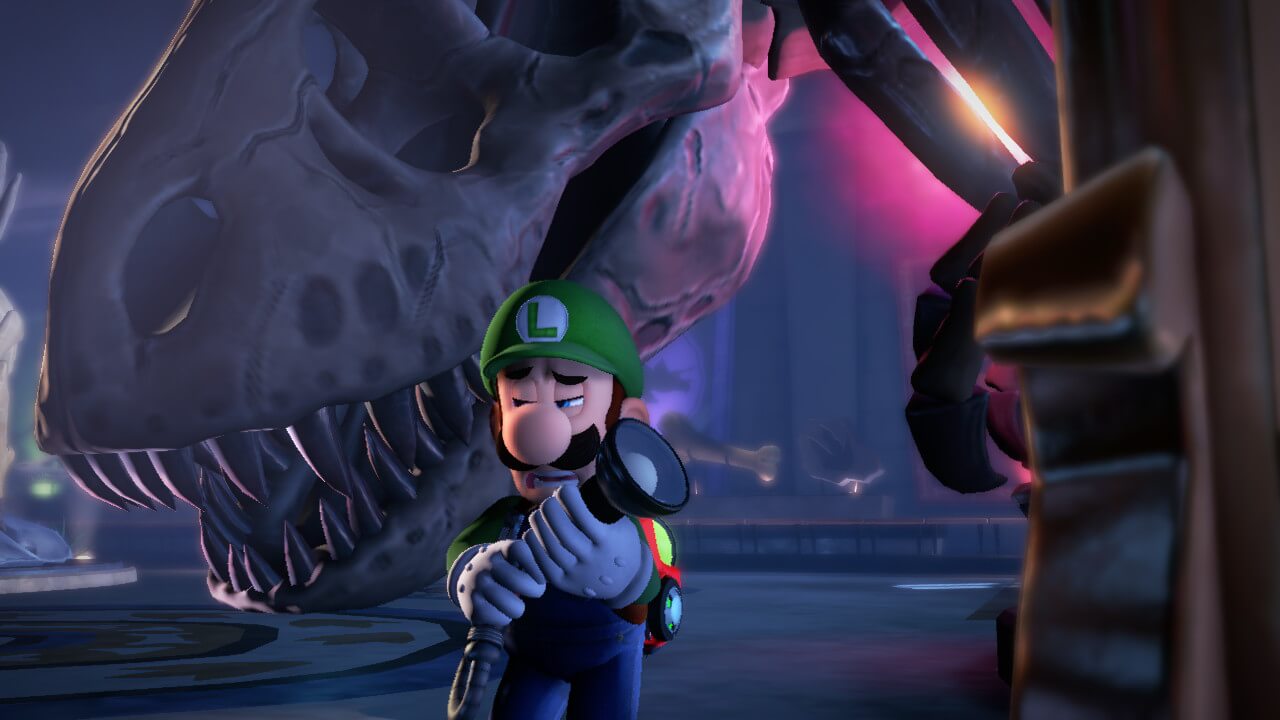 No two fights ever feel quite the same, pushing Luigi and Gooigi's powers to their limits and showing the full breadth of what they can do, and defeating a boss gives you the elevator button you need to reach the next floor. They're as unforgettable as they are difficult, with the final boss fight being the most challenging of them all.

Luigi Has Never Been More Alive

If you've always been a Luigi fan, Luigi's Mansion 3 cannot be missed. This game gives him more personality and charm than he's ever had, and it's amazing to see him grow into himself on the Nintendo Switch. For the most part, Luigi isn't as agile, nimble or brave as his older, more famous brother, Mario, but the fact that he's terrified of everything and still takes action makes him an incredibly relatable and likable hero. 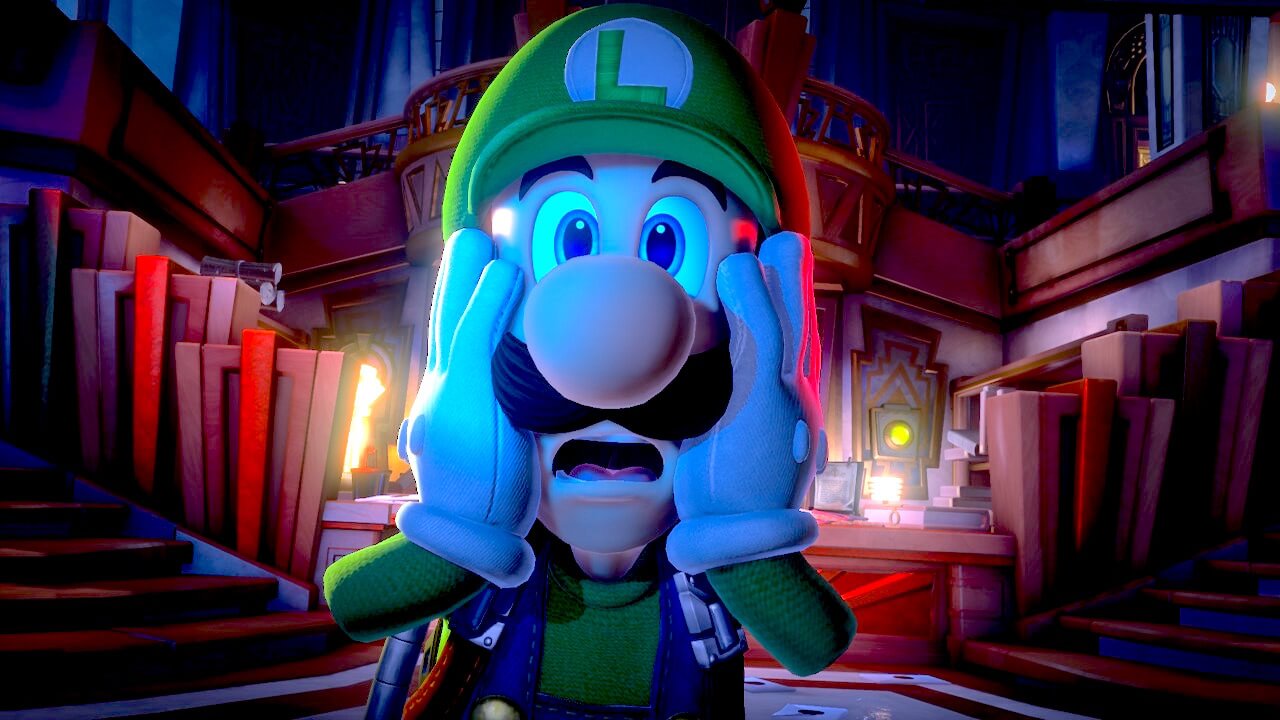 Beautifully rendered cutscenes show us what Luigi is really like, illustrating the potential of Luigi as a character, and making me hopeful that other beloved Nintendo icons (I'm crossing my fingers for Wario and Waluigi) can be the stars of their own meticulously crafted Switch games very soon. It certainly deserves to go down as one of the most enchanting titles on the Switch so far. 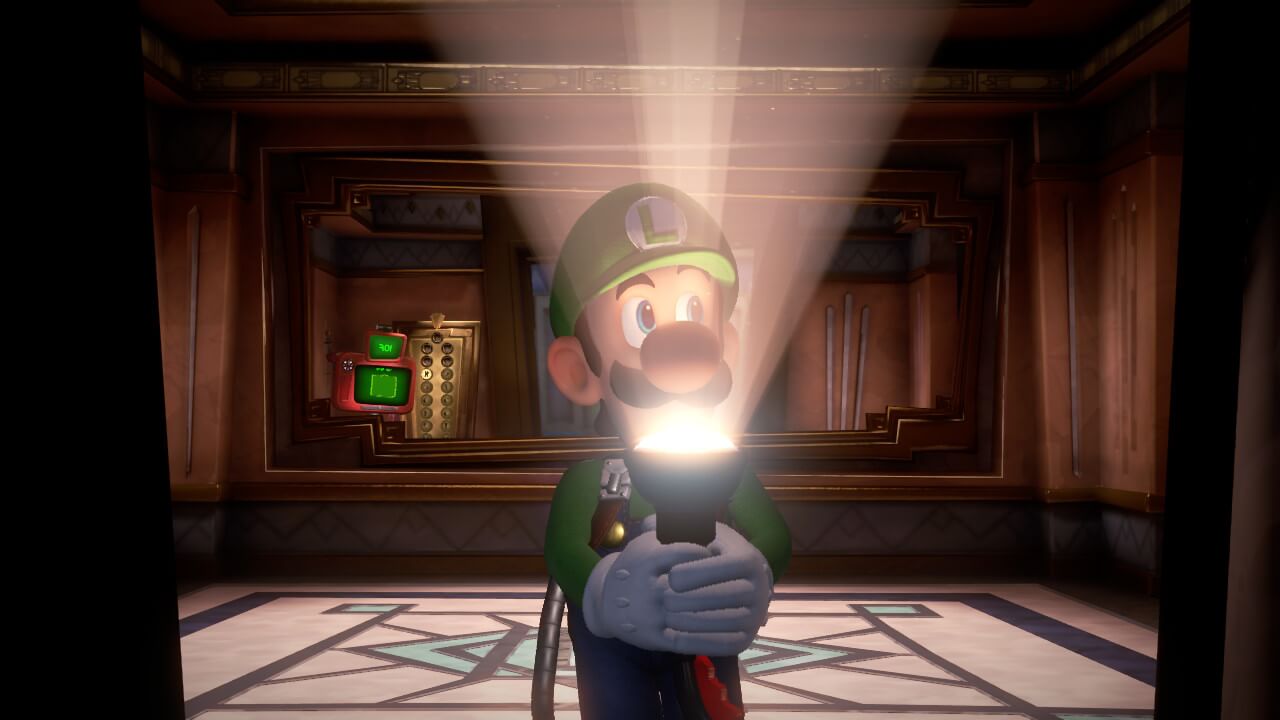