Before He Was Archie's Riverdale Dad, Luke Perry Was Young Hollywood Royalty

Long before the veteran actor signed on to the CW's hit show, Luke, who tragically died of a stroke at age 52 on March 4, was immensely larger Hollywood royalty than his current cast.

All through the '90s, Luke graced the cover of every magazine, be it a teeny-bopper or celeb gossip publication. He, Jason Priestley and Shannen Doherty were legitimate icons. Long before social media, these three stars rose to fame solely based on their good looks, sought-after social lives and the popularity of their hit show, Beverly Hills, 90210. As FOX's relatable high school drama took off, and Luke got into a legendary on-camera relationship with Shannen (aka Brenda Walsh), he became unstoppable.

Unlike some of his co-stars, however, fame never went to his head. He was never caught up in a dishy scandal; his dating life was always under the radar; there were never reports that he was difficult to work with; you didn't really see him out partying. He was perceived IRL similarly to his on-camera character (but with a less troubled upbringing). Yes, despite all the success in the world, Luke maintained a low profile.

In between his 90210 success, he also landed memorable roles in the films, Buffy the Vampire Slayer and 8 Seconds. Even so, he was always known as Dylan McKay. His on-screen relationships constantly drove viewers (🙋🏻) to tears. Whether it was his first breakup with Brenda on the beach (R.E.M.'s "Losing My Religion" will never be heard the same), the day he told Brenda he was leaving her for her best friend, Kelly Taylor (Jennie Garth), or the night after his wedding, when he found his wife, Toni, murdered—his love life always got the best of us.

Luke's passion for his craft was truly admirable, making his relationships so believable and touching. Name a 90210 fan who wasn't completely invested in Dylan's rollercoaster romances. Dylan was presented as the brooding, motorcycling bad boy, but, underneath his tough exterior, he was just a sensitive guy with a lot of love to give—and a heart bruised by a brutal family past. 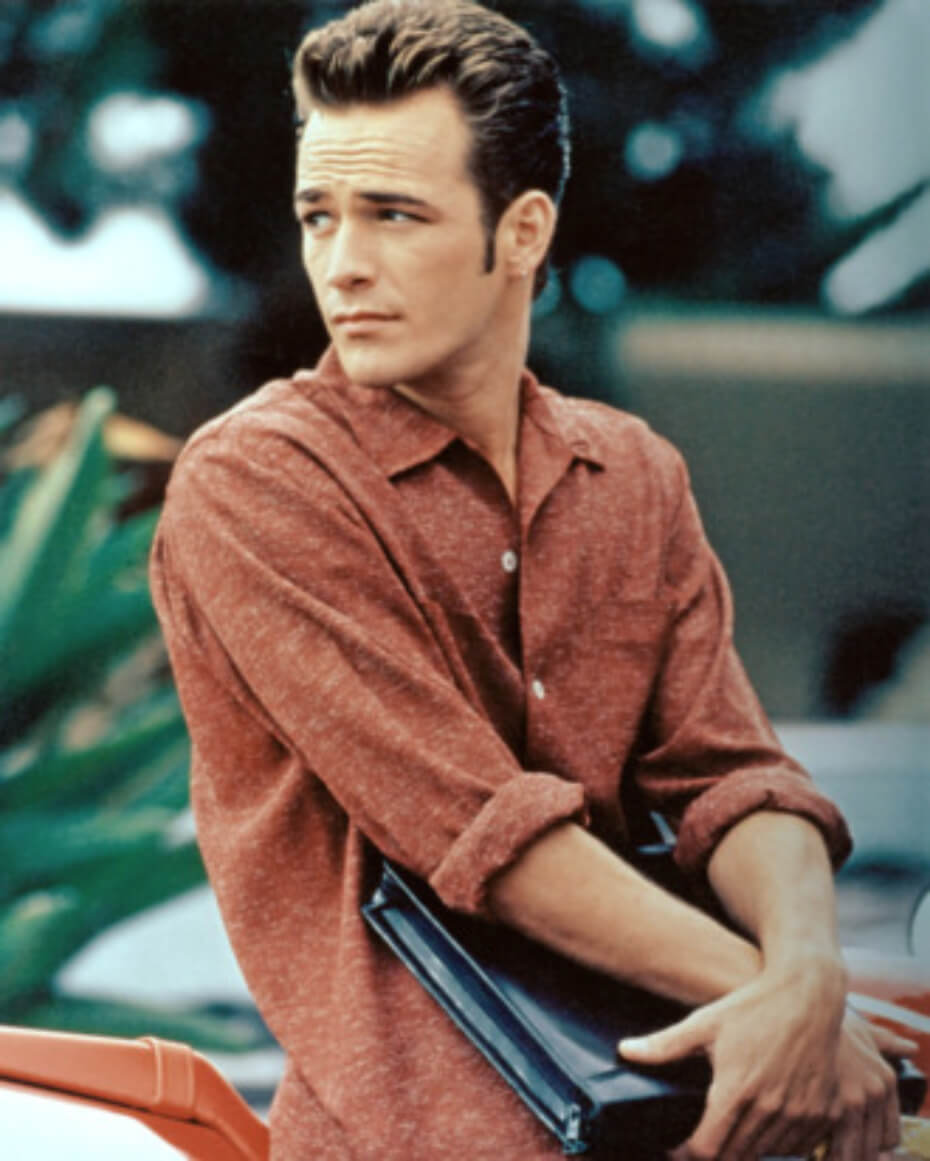 I was only eight-years-old when fell in love with Luke, the show and his breathtaking TV romance with Brenda. 90210 set the bar for every teen drama you see today. It was the first of its kind. All these years later, not much has changed (except the sizes of cell phones and hair). I can watch any given episode and fall in love with it all over again, or relate to one of the plotlines either personally, or through a friend's experience. Here I was, watching all these adult-like situations go down, and yet I was years away from even having my first kiss. I wasn't phased, though. I felt a deep connection with the whole cast and all of their fascinating storylines. Even when I felt out of place at school, I always felt a bond with my favorite TV cast.

It didn't take long before I proclaimed myself the biggest 90210 fan who ever lived—especially when it came to Dylan and Brenda's relationship. By the time the first season finished airing in May 1991, I owned 90210 stationary; bath towels covered in Luke and Jason's face; my 4th grade teacher bought me a 90210 T-shirt for Hanukkah; I owned water bottles, puzzles, you name it. I was totally obsessed. 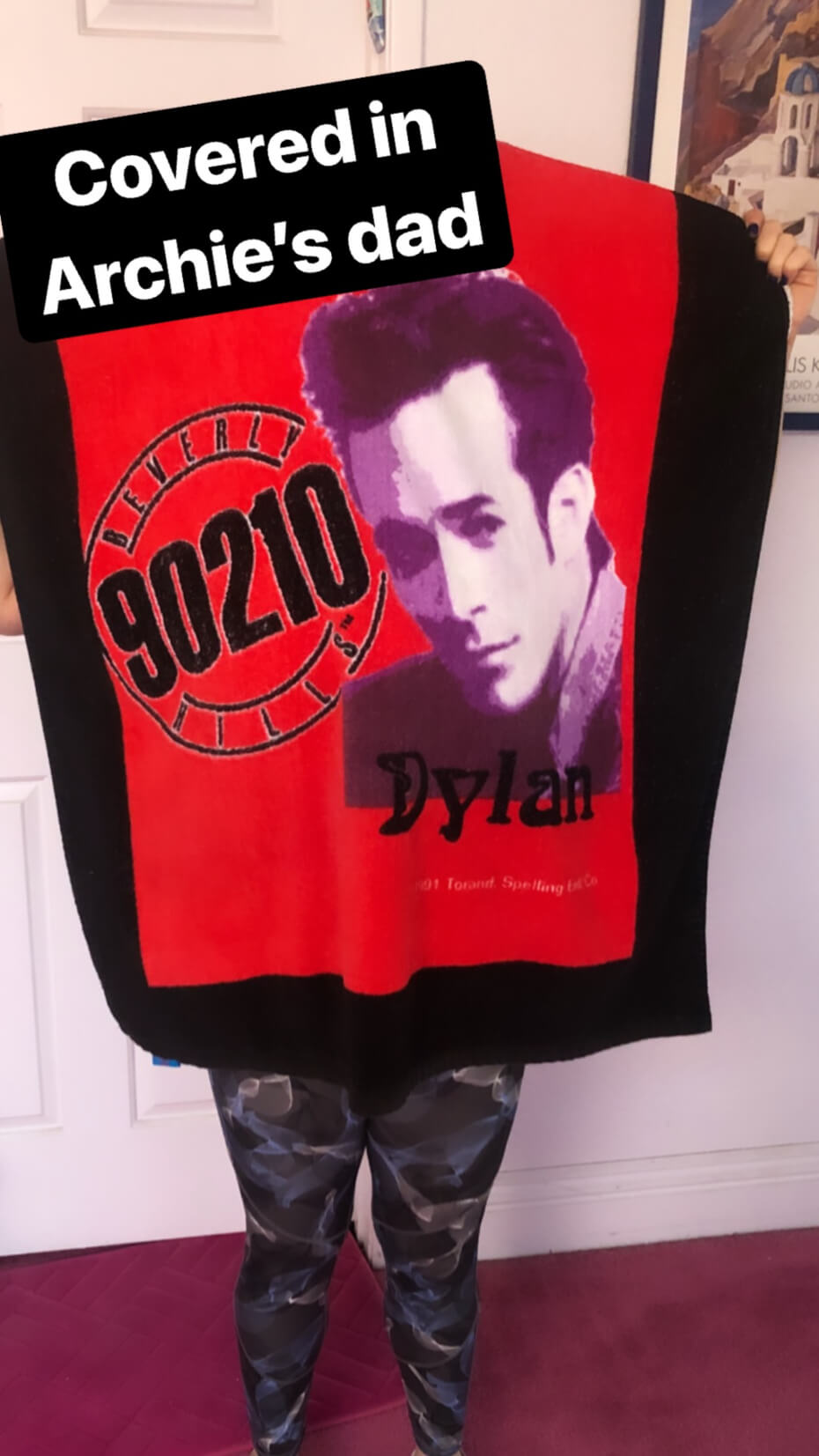 (me, ironically taking this pic just one day before news of Luke's stroke made headlines)

Luke ended up leaving the show several years in (and returned for the series finale), but the program actually made it through an entire decade, and I was there for every single episode. When it did eventually end, Luke cemented himself as a legitimate TV icon. He was forever Dylan McKay, and nothing would ever change that.

My Big Moment With Luke

Almost 15 years after 90210's series finale, and well into my entertainment journalism career, I was approached with the opportunity to interview the legend. My friend, Wendy, was the publicist for Hot in Cleveland, a then-popular TV Land comedy that starred fellow icon Betty White. The series often had various guest stars appear, and Wendy always gave me first dibs on one-on-one interviews—this time being with Luke. When it came to this opportunity, she jumped at the chance for me to live out one of my dreams.

The interview didn't come without a caveat, however—a disappointing one. I was firmly instructed that any discussion of 90210 was off-limits. That was it. Should I accidentally utter that five-number zip-code, the interview would be cut without question.

While the demand shook me up a bit (what would he have to hide about an era that brought him so much success and joy?), I obviously obliged, as I wasn't about to turn down this opportunity. Sometimes, for whatever reason, certain actors like to leave their most memorable roles in the past and focus on more "serious" stuff in the present. I think it's quite silly, but to each their own. 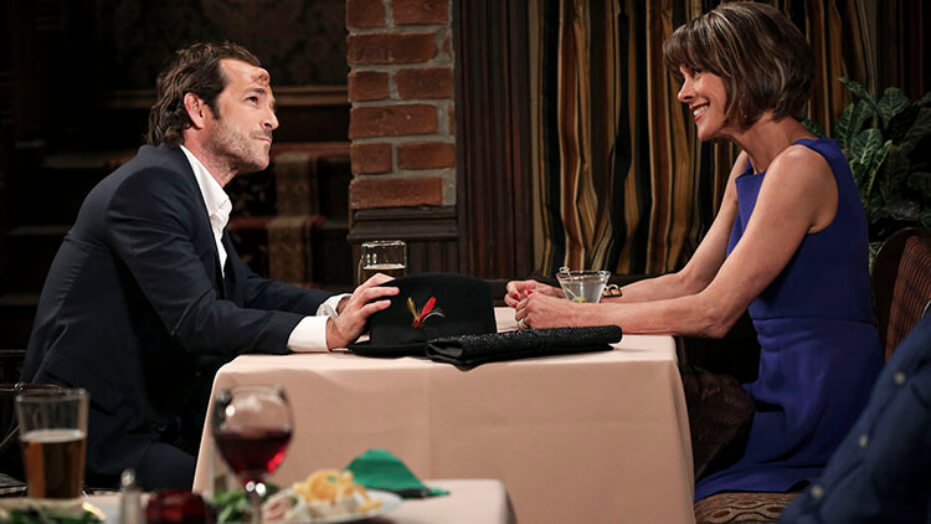 (Hot in Cleveland via TV Land)

Given the warning, I went into the interview slightly nervous. Would he be one of those uptight, one-word-response kind of guys? Would he laugh at my questions? Well, my nervousness subsided pretty quickly, as before I knew it, we were 20 minutes into deep discussion (mostly about his adamant distaste for reality TV, and what he deemed crap content)—and those five forbidden numbers were the furthest thing from my mind.

As I slowly began to wrap things up, I don't remember exactly what led to it, but he voluntarily made a comment that acknowledged his past. It was almost like he felt comfortable enough with me, and was giving me the keys to unlock that forbidden topic.

So, I went for it, slowly. And he couldn't have been nicer about it. If anything, I think he found it funny that anyone at all would take him or one of his characters so darn seriously. He truly seemed amused by it all. Before I knew it, 30 minutes had gone by. And they weren't wasted. They were so genuine. There was no entourage, no personal publicist looking over his shoulder, no one interjecting or signaling for me to wrap things up. He was just raw, saying whatever he wanted. In just that half-hour, I felt like I got to know Luke's personality—and it was pretty much what you'd expect.

I've (for the most part) prided myself on not being that annoying reporter who insists on taking a photo with every celeb I encounter. Well, anyone from 90210 is exempt from the rules. I was an utter wreck when I crossed paths (twice!) with Shannen, who was also a delight, btw. So, according to the way I saw it, Luke was fair game. But, according to his mellow demeanor, he didn't strike me as someone who'd want to do the whole "let me get on my good side" ordeal. But as I closed out the interview and said my goodbyes, I was in for a surprise when he suggested we take the shot. What?! As you can see below, the pic was definitely a highlight for me. He was the best!

As quite conceivably the biggest #90210 fan who ever did live, it was a pure joy having the opportunity to spend part of the afternoon w Luke Perry, who was an utmost gem. <3

The late 2010s introduced a new wave of Young Hollywood. Stranger Things took Netflix by storm, bringing us the adorable Millie Bobby Brown and Finn Wolfhard; 13 Reasons Why gave us a much darker look into high school drama, starring relative newcomers, Dylan Minnette and Katherine Langford; and, most notably, The CW brought us Riverdale, a teen mystery drama based on Archie Comics, with an ensemble cast full of mostly fresh faces-turned-massive stars.

While the majority of the cast was a bunch of relative unknowns at the time it premiered in Jan. 2017, it was a breath of fresh air to see my old pal Luke, playing Archie's dependable, doting dad—a role I can envision reflecting his real-life father persona (he left two children behind when he died). 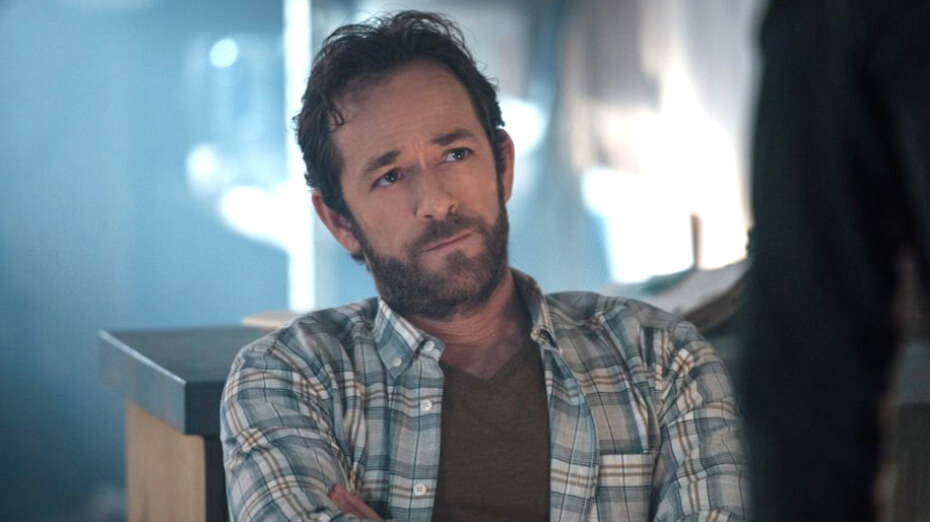 Though I'd be lying if I said I'm a Riverdale fan (sorry, I'm not), I am happy that it's become such a success, and that a whole new generation got to know Luke, who, in his heyday, experienced an exaggerated level of KJ Apa and Cole Sprouse fame.

Whether you know him as Dylan McKay, Fred Andrews or a guy you've seen as a guest star on a crime show, you know Luke loved to tell stories through his acting. He had a remarkable talent that will never go forgotten; and his characters have a place in so many of our hearts that will never be filled by anyone else. If you read any of his tributes left by friends, former colleagues, journalists and industry folks alike, there isn't a negative word or ounce of controversy to be found. Only happy memories. Rest in peace, Luke Perry.

Do you know someone who's struggling to get through Luke's sudden death? HERE are nine thoughtful ways to help someone going through a tough time.