Lush is celebrating its 30th anniversary with a bang this year.

Not only are they launching a whopping 54 new bath bombs, but those bombs are also going on a North American tour to spread the word (and some amazing scents) across the continent.

I had the good fortune of being invited to #LushLabs on tour, at its first stop in Venice, California, and the colorful event was everything I dreamed it would be. 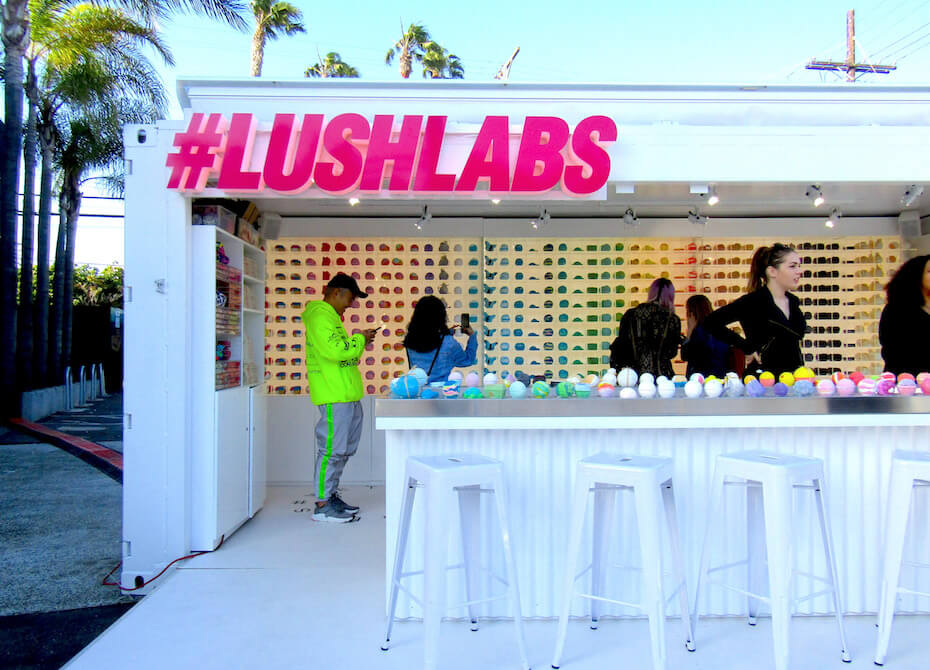 I was nearly overwhelmed by two giant walls packed with vibrantly colored bath bombs. I thought the mixing of more than 50 bath bombs might result in one big, obnoxious smell, but, instead, the entire place smelled incredible. 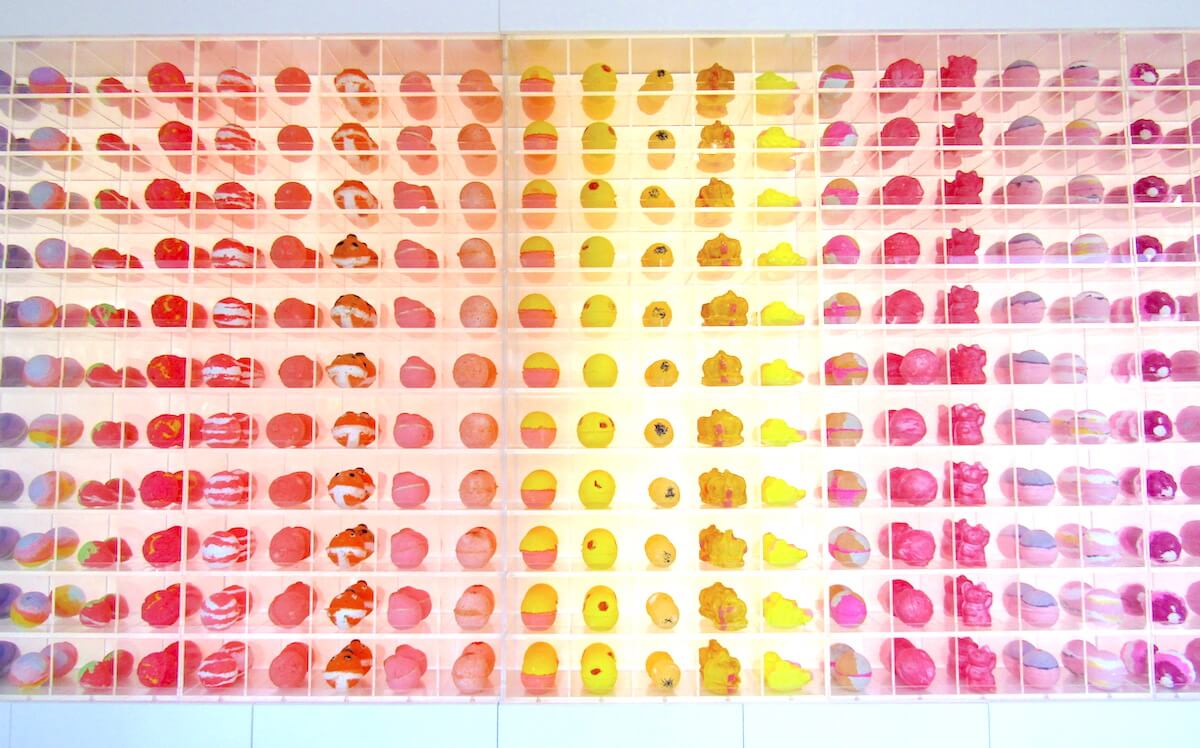 In front of each wall was a little station, like a revolving sushi bar, with a long snake of bath bombs making laps, giving attendees a view of all the amazing fizzes on offer.

The collection of 54 bath bombs brings back some beloved limited-edition bombs from the past, as well as bombs that were previously exclusive to Lush's concept shop in Harajuku, Japan. The tour will be one of the only places where the entire collection of new bombs will be available. 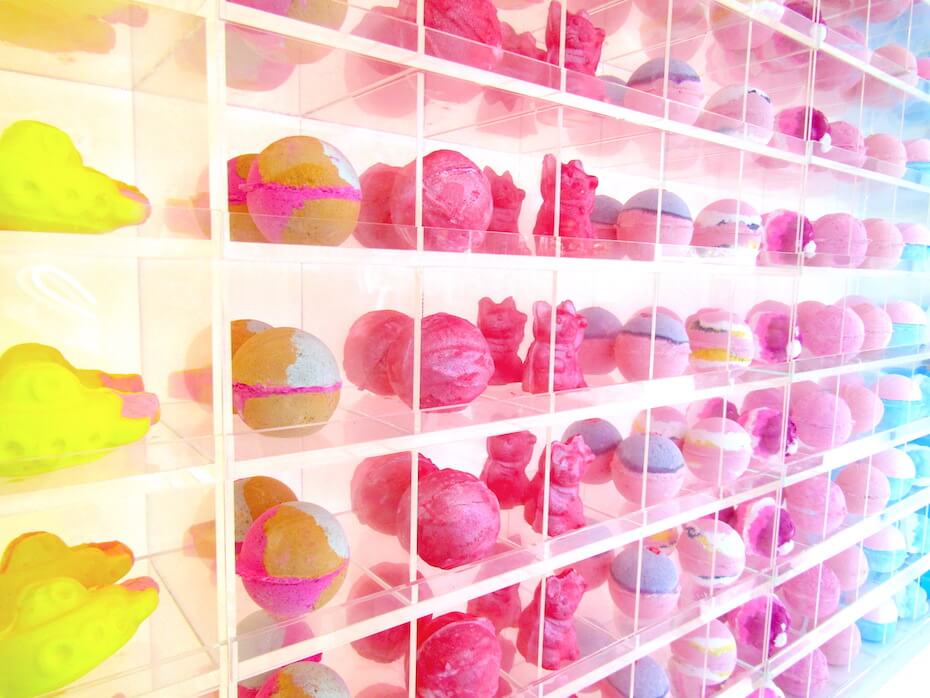 Because of that exclusivity, I made sure to get as hands-on with the bath bombs as possible. I wanted to smell every bomb that caught my eye, and I must have picked up and inhaled the scent of dozens of bath bombs, both from the walls and from the conveyor, by the time I left the event. The process left my hands—and, I later discovered, my nose—covered in various tones of shiny glitter, but it was entirely worth it. 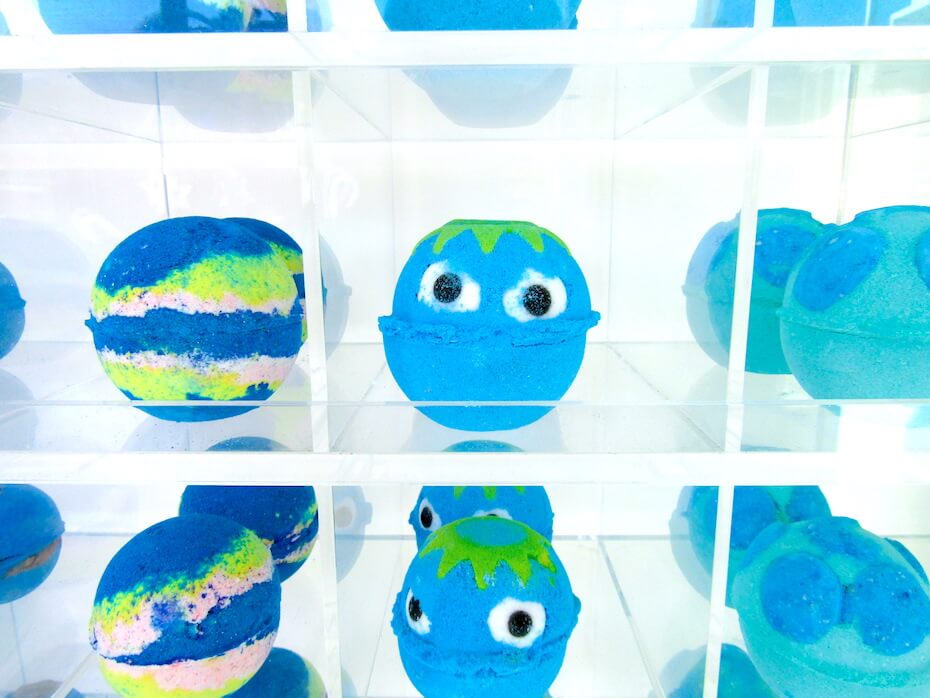 While the bath bombs are available to purchase on the tour, the folks at Lush were kind enough to send me home with four bath bombs of my choice. Selecting them seemed like a daunting task, but I was grateful that the super knowledgable employees were so willing to help out. They asked me what kind of scents I liked, and how I wanted to feel after a bath, both physically and emotionally. 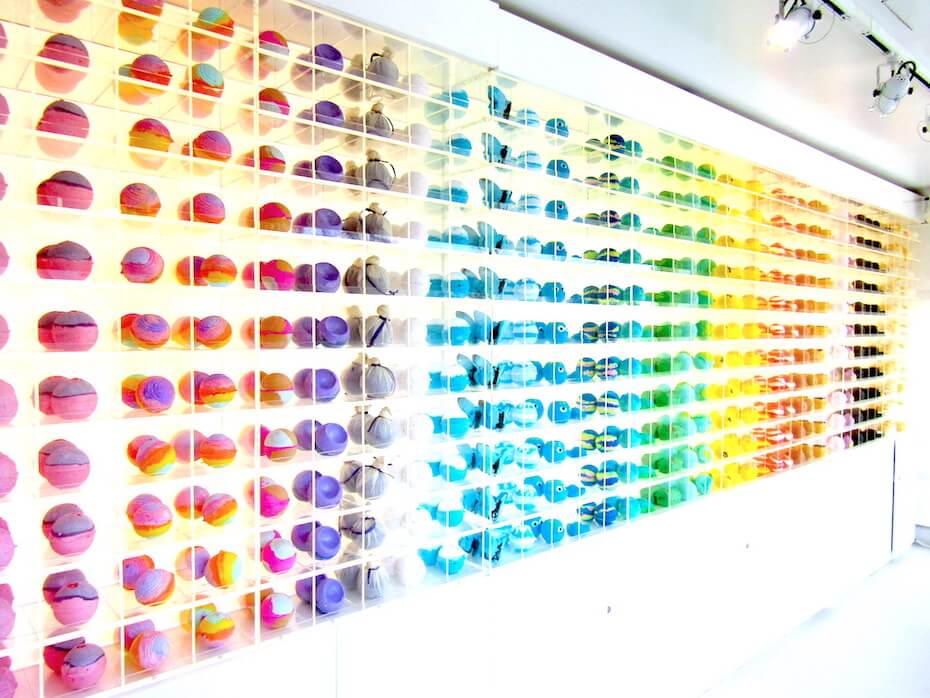 The whole process was made much easier by the incredible new #LushLabs app, which helps users identify Lush bath bombs at a glance with their camera. This reduces the need for extra packaging that may include the name and a description for each bomb, and also helps customers quickly find the price and ingredients of each one. Plus, the app shows a preview of what each bath bomb looks like when it's dissolved in water, so the good people at Lush don't have to waste lots of water—and bombs—showing you the before and after. I finally decided on my four bath bombs, which were then wrapped up for me in an adorable reusable bindle. When I took them home, I loved how easy it was to find (most of) them in the app. 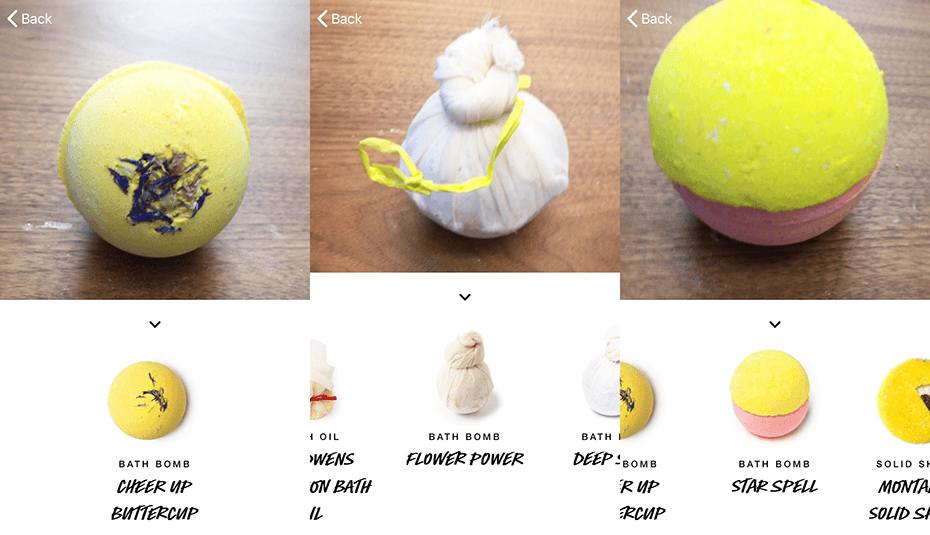 While I struggled to find one of my very favorite bombs, So White, with the AR camera, I found it easily by typing "apple" into the #LushLabs app's search function. 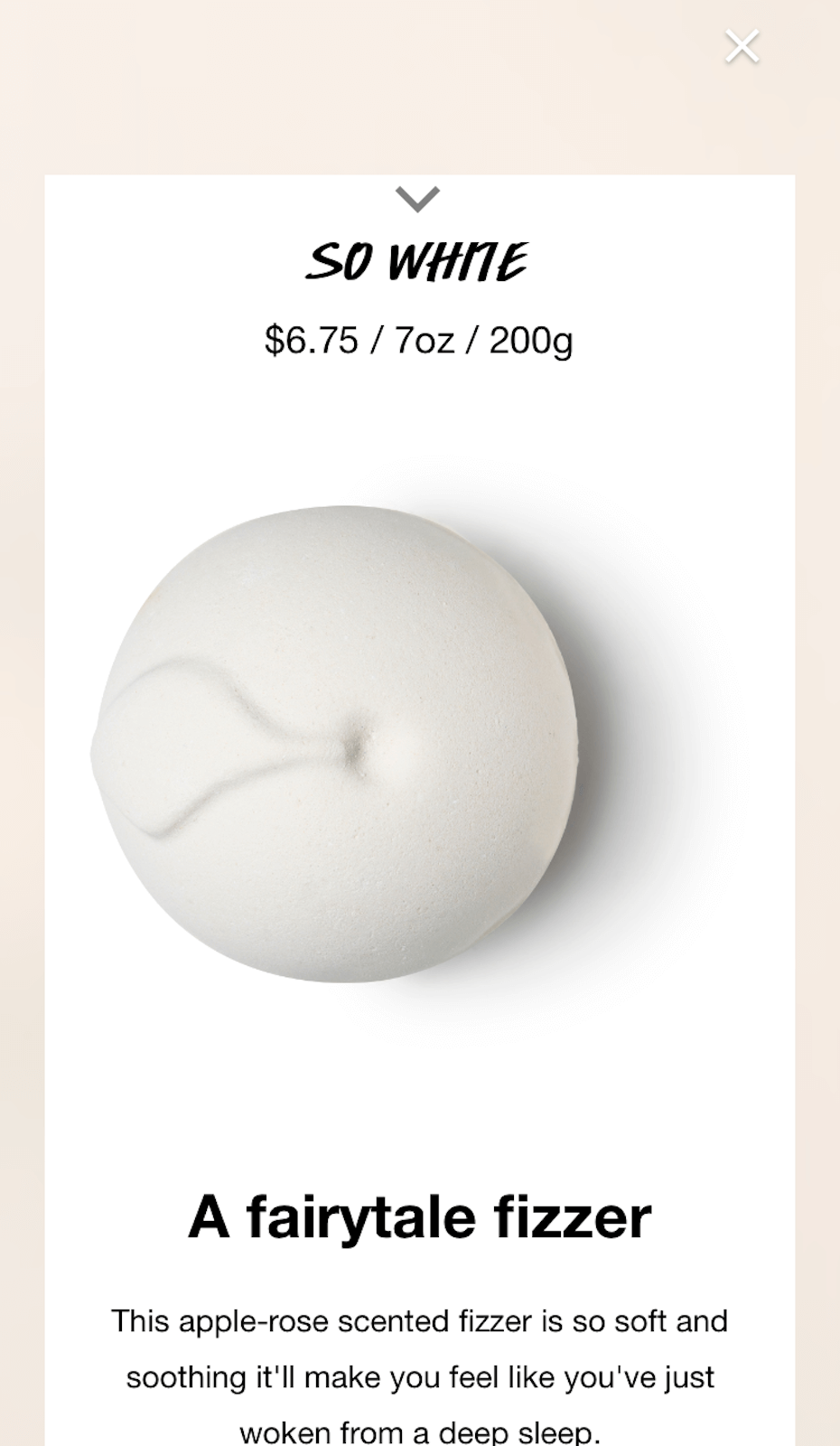 I'm completely obsessed with the scent of all four bath bombs and I plan to review all of them here in the near future to see if they truly are just right for me.

The tour will be in Venice, California until May 19. Future dates haven't yet been announced, but this post will be updated once they're available. This is a must-see experience for bath bomb fiends everywhere, and I can't wait to see it take the rest of the nation by storm. 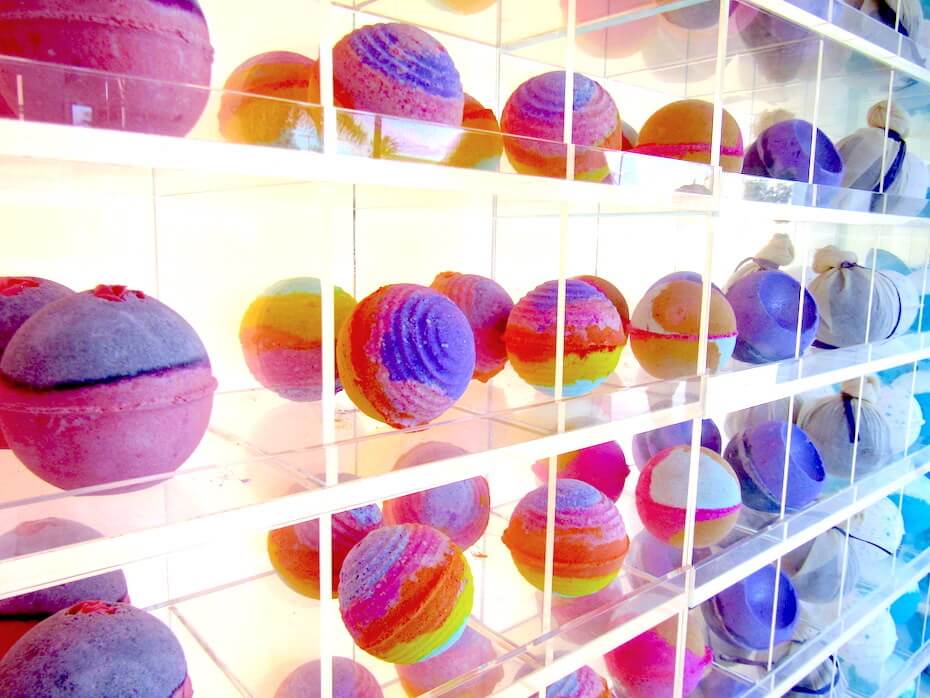 If you're not even sure where to start when it comes to bath bombs, click HERE to find out the Lush bath bomb you should try, based on your zodiac sign.