Maddie Cranston Sets Out To Save The Oceans!

10-year-old Maddie Cranston is a young activist and conservationist who fights to protect the oceans! She also blogs at her site, "Cool Clicks to Save our Planet." 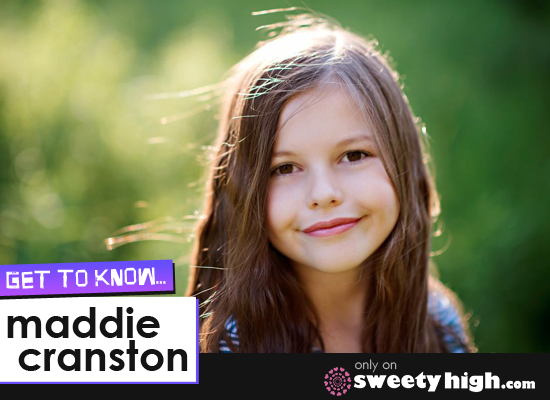 We recently spoke with the young "ocean warrior" about what inspired her involvement in saving the oceans, and about the actions we can all take to do our part!

Maddie's fascination with the sea began at a very young age.

"At first I just loved oceans," she said. "I thought they were a magnificent place, and there are such amazing creatures in them."

When Maddie was about six, she saw a film called Oceans, and it forever altered the way she would view her relationship with the water.

"It changed my life," Maddie said. "I saw all the pollution and harm we were causing. It put a fire in me. I really wanted to make a difference and save our oceans."

The road to activism began with one speech. Maddie's mother had a friend who was hosting an event called Ignite Charity, and Maddie got the chance to speak there.

"It wasn't my best speech but it got my message out there," Maddie said. "It all came together."

Maddie admitted she was anxious about making her first speech onstage.

"I was really nervous and I was thinking about all these things," Maddie said. "But it eventually came down to the fact that I was making a difference, and if I just did it then my oceans would be so much happier."

From there, Maddie continued to take part in speaking engagements. She also held bake sales, and made jewelry and calendars to sell in order to raise both money and awareness for her cause.

Next, she plans to share her "Activism In a Box" toolkit, which can be found at her website, here.

"It talks about how you can start and make a difference and help find your passions," she said.

One of the most important elements of the toolkit is the acronym PIRAS, which stands for plan, implement, view, adjust and share.

"These steps are so important in finding a passion and then doing something about it," Maddie said.

Even a simple gesture can make a difference.

"There are so many things you can do," Maddie said. "If you're walking down the sidewalk, and you pick up a piece of trash, you're making a difference."

Instead of using plastic bags at the grocery store, you can bring in your own reusable bag, Maddie added. You can also pack less wasteful lunches, and try to avoid using plastic water bottles, too.

It's also important to remember that it's never too early to start backing a cause that matters to you.

"I like to say that children are our future, but they are also our present," Maddie said. "I think people underestimate us. They think because we're small that we can't do much. People think we're not worth listening to, but we can be listened to. If we just say it, they will listen."

Making a change can be as easy as letting someone else know about the cause.

"We can do simple things," she said. "Maybe talking to your friends or talking to an adult, or going to school and talking about what you believe in, what you're passionate about and what you want to do in the world to make a positive change happen."

Further, you don't have to do big speaking engagements or hold bake sales and events to create change.

"I want children to know they don't have to do something huge to make a difference," she said. "They can just talk to their friends, talk to their teachers, their parents. They can help you along the way."

Maddie said that one of the best ways to spread the word about your cause is to engage the people around you.

"People are great supporters if you just tap them on the shoulder," she said. "Tell people you trust, and they can get your message out there and help you. Start with that one person and they can spread the message."

She added that social media can be an incredible tool to get the word out about important causes. Maddie also got connected with her mentor Lesley Rochat, founder of the AfriOceans Conservation Alliance, though social media.

Maddie said that the biggest reason the oceans are so important is that they keep us alive.

"The oceans cover almost 75 percent of the earth and they control our weather," she said. "Almost half of the population depend on fish for their main protein and food, but we pollute our oceans with plastic and oil spills."

When we eat fish that have been exposed to plastics and oil, we can become ill as well.

"Plastics can hurt animals and everything around them," she said.

Tiny balls of plastic contained in shampoos and soaps, called microbeads, go down drains into lakes and oceans and get eaten by fish, making them sick. They can even end up back on our plates when we eat fish.

And even after oil spills are cleaned up, their aftermath has a lasting effect on the oceans and the animals that live in them.

"Without our oceans we won't be here," Maddie said. "We need to take care of our oceans and we need to act now because time is running out."

Want to help Maddie protect the oceans? Be sure to check out her social media pages below! You can also tell us about the causes that matter most to you at SweetyHigh.com!