Madeleine Hage On "When Haiti Shakes"!

19-year-old Madeleine Hage has been a disaster relief volunteer for nearly half of her life, and recently published a book called When Haiti Shakes to educate kids about earthquake safety and more. 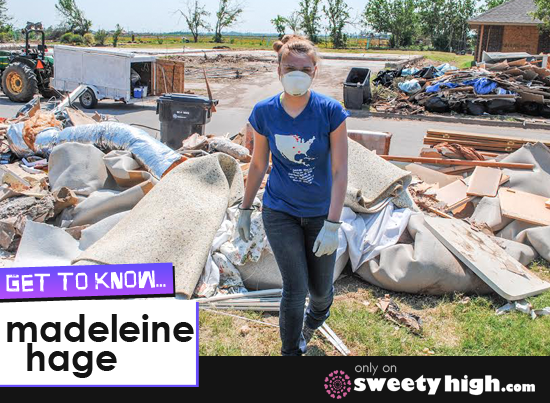 We recently chatted with Madeleine about her work with people in need, and what motivated her to write When Haiti Shakes!

"I remember thinking to myself: 'We can't possibly be in the United States anymore,'" Madeleine said. "The city was devastated; American citizens were without food, clothing, and shelter. It didn't seem like I was in a developed, wealthy country anymore. I remember feeling deep sadness for the people that I talked to, who had lost everything."

But as much as she saw, Madeleine said she couldn't begin to comprehend would it would be like to live in their shoes.

At the age of 10, Madeleine couldn't do much heavy lifting, but she did make a difference by playing with the children living in the affected neighborhoods.

"I tried my best to distract them and help them have fun despite all of the horrible things that they were experiencing," she said. "I remember after my first day in the 9th ward, I went back to the hotel and cried because I felt so bad for the people that I had met. I realized how lucky I was, and I think that's when I really became passionate about helping other people."

Madeleine continued working hard with the organization whenever she could. She was working at Headwaters in the summer of 2013 when her aunt approached her and asked if she would be interested in writing a book about earthquakes.

"She told me that the director of one of the schools in Haiti that Headwaters sponsored had said that when the earthquake struck, no one knew what was happening," Madeleine explained. "He said that no one knew what to do, everyone was scared, people were running into buildings when they should have been taking cover somewhere else; everyone was panicking."

The director asked if Headwaters could put together resources to educate people about what had happened, as well as inform them about how to respond to future earthquakes.

When her aunt approached her with the project, Madeleine was quick to oblige.

"I could only imagine how scary it would be to go through a natural disaster and not understand what is going on," Madeleine said. "I was motivated because I wanted to help explain what an earthquake was in simple terms, and potentially ease some of the fear and uncertainty associated with earthquakes."

Madeleine's writing process began with a lot of research on earthquakes and earthquake safety. She then outlined what she wanted to say to create a rough draft.

"It was a lot harder to explain the relatively complex concept of tectonic plates in simple terms, so I decided to use the analogy of puzzle pieces," Madeleine said. "I had a lot of people help me finalize the text and Aya Kone, a high school student in Germany, contributed many of the drawings for the book."

Aya had also volunteered with Headwaters Relief from a young age. She started when she was just 8.

The result was a book called When Haiti Shakes. It was definitely created with Haiti in mind, bound in materials to withstand the country's hot and humid climate.

Madeleine said that the people of Haiti are so underprepared for earthquakes mostly because they lack an education.

"The vast majority of people in Haiti are not educated, generally because of the poverty that afflicts a huge amount of the population," she said. "While it might be normal for us to learn about tectonic plates and earthquakes in elementary school or middle school, many Haitians don't have that kind of opportunity."

Haiti also hadn't experienced a major earthquake since the Dominican Republic earthquake in 1946.

"It wasn't a type of natural disaster that was on people's radar," she said.

Madeleine Hage hopes that her impact won't end with her volunteering and the book. She is currently a pre-med student at Emory University in Atlanta. She aims to finish there before attending medical school.

"I hope to become a physician and I would ideally like to work with underprivileged populations, either in the United States or abroad," she said.

When Haiti Shakes also doesn't end with the book. Madeleine and Headwaters also created an interactive map that reveals the location of the fault running through Haiti.

"I am so proud of how everything turned out," she said. "This book was a huge collaborative effort. So many people came together and used their talents to make something that turned out beautifully. I couldn't be happier with the result, and I think it can really help make a difference for children in Haiti. The book is being used to help educate them in case another earthquake strikes. Now they'll know what to do!"

To keep up with all of the latest work from Headwaters Disaster Relief, be sure to follow them on their social pages below. Join us at SweetyHigh.com to tell us all about your favorite causes and what you do to make a difference in the world!