18-year-old Madeleine LeCesne from New Orleans, Louisiana is one of the 2014 National Student Poets. In this interview with Madeleine, she discusses her views on poetry, loss and inspiration. 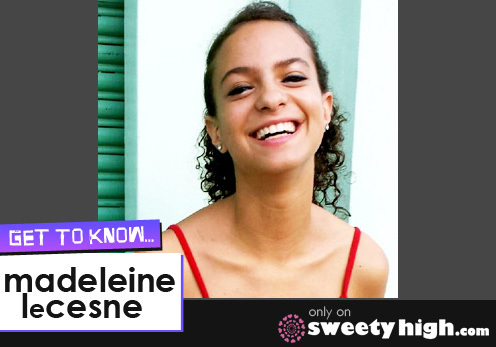 Madeleine compares poetry to the Law of Conservation of Mass, which says that the mass of a system remains constant over time, never changing quantity.

"Poetry seeks to fill the holes in language," she explained. "We could create a new word to perfectly define the feeling of driving over a pothole and spilling coffee all over a white blouse, but how far would this one word reach?"

In essence, a descriptive series of words can be much more powerful than a single, lonely word.

"We write poems because no one word can capture the disappointment of a stain, the hot stickiness of coffee on skin," she said. "We must work within the confines of our language to create new possibilities– creation through recycling."

All of this fits within Madeleine's theory.

"I think this idea means every poem has already been written and is yet to be written," she said.

Madeleine can't recall her beginnings in poetry, but she was exposed to it at an early age.

"The first stories my mother ever read to me were epic poems, so I didn't make the distinction between poetry and prose until I started school," she said. "Before that, I defined all written language as poetry."

"There's that need when you're very young to hold on to everything," she said. "Unfortunately, I have the attention span of a firecracker, so recording all of my day did not work."

"I began writing one line a day, describing the most intense part of it, good or bad," she said. "The line could be 'I live for satsumas!' or 'Holden [my twin brother] is just so mean!' These lines collected and patterns arose. I didn't realize these would become my first poems."

"My teacher, Brad Richard, set me ablaze with poetry," she said. "I still can't describe my first day of freshman year when we sat down to read 'Grief' by Matthew Dickman. Wow."

When we asked Madeleine what poetry means to her, she was prepared with an answer.

"This is funny because I only just realized what poetry means to me this week," she said. "Poetry is the art of getting lost. Getting lost and going along with it, being okay with not knowing where you're going."

Part of her poetic philosophy actually stems from the discipline of science.

"I am not a science person whatsoever, but last year I took biology and learned about phagocytosis, where a cell engulfs a particle in order to take it in for itself," she said. "This is reading and writing poetry. You always want to be that particle the poem devours, if that makes sense. You want to be completely consumed by the language and lost in it. I love this feeling."

With Madeleine's work, she hopes to promote a greater understanding of herself.

"Like most people, I have trouble gathering my thoughts and communicating how I feel," she said. "When I have an idea for a poem, it's like that feeling is too big for language, too sacred, so my poems always fail me in a sense."

But Madeleine doesn't believe this experience is unique to her.

"This is a universal feeling, especially for young writers," she said. "I think it's the reason the dash remains my favorite piece of punctuation– that panting and stammering to figure out what you want to say. I get over this feeling by reminding myself that language is an approximation, you can only take it so far. Nothing will ever return the feeling of riding a rollercoaster to you. But, no matter, because poets will always fight to get it back."

Madeleine's life, including her poetry, were thrown into a spiral after Hurricane Katrina in 2005.

"I lost my home in Hurricane Katrina, my physical house as well as my city," she said. "Because of this, New Orleans has become the most sacred to me; it's what I treasure above pretty much everything with the exception of my family."

So far, Madeleine has avoided writing about New Orleans.

"I don't want to capture the city in my writing, partly because it has such an incredible and intimidating history of inspiring art," she said. "But also, the poems I write are always in some way about loss, a feeling that's left me. I want to always be experiencing New Orleans. I never want to lose it again."

Last but not least, Madeleine wanted to share the idea that poetry is universal.

"Poetry depends on the most essential part of our society: language," she said. "And language at its core is the means by which we connect our thoughts. Anyone who has ever wished to be understood is already a poet."

Read a sampling of Madeleine LeCesne's poetry here! Also be sure to check out our interview with fellow 2014 National Student Poet Ashley Gong here, and stay tuned for an interview with Julia Falkner later this week!

Love poetry? You can also join our community at Sweety High to share your writing with us!