Madelyn McGlynn is the 18-year-old founder of NETwork Against Malaria, which protects the lives of children, pregnant women, and families in Uganda by distributing mosquito nets. 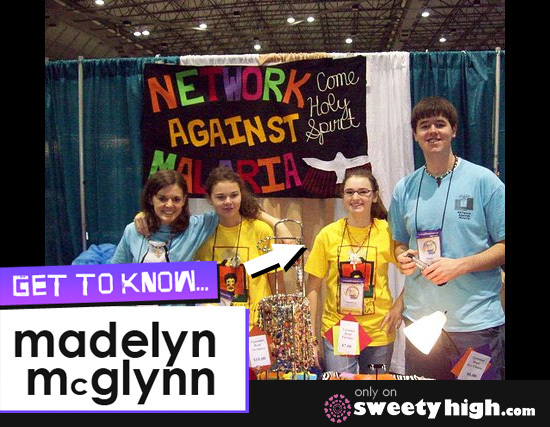 We spoke with Madelyn about what prompted her to support such an important cause, and how far her organization has come since its inception!

Madelyn McGlynn is the youngest of 5 sisters. When Madelyn was just 12, she and her older sisters met a Ugandan educator named Mujule.

Mujule had started schools for girls in rural Uganda, where educating females was not a part of the culture. His efforts were met with resistance.

"As a family of five girls, this struck us as particularly inspirational," Madelyn explained.

She and her sisters assumed that this oppression must have been the greatest threat to the education of the nation.

"But Mujule told us that malaria impeded education the most," Madelyn said.

The average student in Uganda misses about 60 days of school every year because of malaria.

"This causes them to fall behind and usually drop out," Madelyn said. "We were inspired to help students our own age."

The McGlynn sisters dedicated themselves to putting an end to the malaria epidemic, learning all they could about the disease.

Their research led them to learn about malaria nets. These insecticide-treated nets cost less than $10 each but make a huge impact.

"It is remarkable to think that something this small saves thousands of lives," she said. "Bed nets reduce malaria transmission in areas even for people who do no sleep directly under the nets."

Madelyn explained that, because of malaria's effect on education, it is the largest cause of poverty in Uganda.

"When we combat malaria, we are combating poverty as well," she said.

The average annual income in some parts of Uganda is as low as $1.95.  NETwork Against Malaria focuses on students because so much is at stake for them.

"When students become sick with malaria and drop out of school, they are condemned to a cycle or poverty," she said.

Every student NETwork Against Malaria saves from malaria brings the country one step closer to putting a stop to poverty.

"We work with Ugandans and Americans to deliver nets to students in impoverished Uganda, emphasizing the importance of working with the culture of the people we are trying to help," she said.

This involves going into schools in Uganda and explaining the importance of mosquito nets to students in their own language. The kids then go home and show their family how to use the nets properly.

NETwork Against Malaria has more than 40,000 volunteers in the U.S. who have educated more than 90,000 people around the world about malaria and how it can be stopped with bed nets.

Madelyn McGlynn has also had the opportunity to share her experiences through a series in the Huffington Post.

"Writing for the Huffington Post is a great experience," she said. "I know I reach so many people whenever I post. I feel I can spread NETwork's message more effectively to a lot of people."

Her experiences with the NETwork Against Malaria have taught her a lot, including the power of working together as a team.

"Everyone is capable of great things," she said. "I never cease to be amazed by the wonderful and creative ideas volunteers have. I never know who is going to be motivated into action when I give a speech."

Madelyn has not personally visited Uganda yet. For now, her efforts are more effective here in the U.S.

A plane ticket to Uganda would cost Madelyn $400. That money could go toward buying 40 mosquito nets, which could save 120 lives.

Instead, the program works with the help of volunteers in Uganda who speak the same language and are trusted by the students there.

"Right now I have no special skills to offer them. If I visited Uganda and went into the schools, the students would not be able to understand me," she said. "But once I acquire valuable education and skills I plan to go to Uganda and contribute to the distributions."

Curious to learn more about the NETwork Against Malaria? Want to get involved? Visit them online at networkagainstmalaria.org!

What causes are you passionate about? Join us at Sweety High and create a fan club that other likeminded girls can join!