Madison Kimrey is 12 years old, but she's already made a splash in the world of politics with her campaign to change a North Carolina voting law that prevents teens from pre-registering. 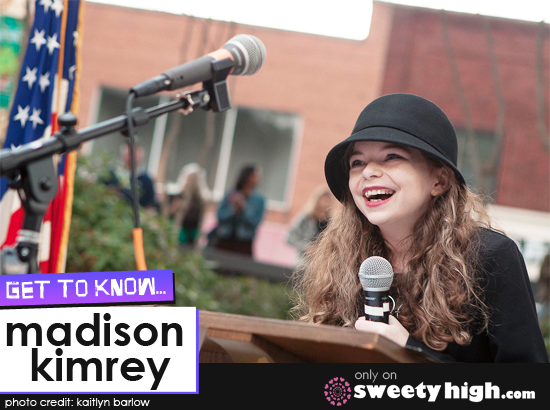 We recently spoke with Madison about what drew her to the cause, and why it's so important for young people to have a stake in their future!

Madison Kimrey first became interested in the topic of voting rights when legislation was introduced in North Carolina that would change the state's voting laws.

"I found out that one of the changes was the elimination of the ability of 16 and 17 year olds to pre-register to vote," Madison explained. "I also found out that they could give no good reason for doing this. One senator argued that pre-registration was 'confusing' to teenagers."

According to Madison, this senator believed that these teens would assume they could vote before the voting age of 18, just because they were pre-registered.

"I felt like this was insulting to the young people of our state and portraying us to the rest of the country as being unintelligent and ignorant," she said. "We should be encouraging young people to take an active part in their government, not discouraging them."

After all, pre-registration was created to get young people interested in their government and get them thinking about voting before they turned 18.

"A program that's designed to increase the voter turnout by young people at the polls is a worthwhile investment in our future," she said.

The 56-page bill, House Bill 589, was passed into law in August of last year. It came to be known as the "voter ID" law, because it requires voters to have a valid photo ID, but the law included a lot of other legislation as well.

"It eliminates same-day registration, eliminates Sunday voting, and cuts a week off of the early voting period," Madison said. "It grants the opportunity to increase poll watchers and the ability of those poll watchers to challenge votes."

But biggest of all, requiring a photo ID makes voting a lot more difficult or even impossible for people who have every right to vote otherwise.

"Even though there's an option for people to get a free ID through the DMV, there is no solution for people who can't get the required documents, such as a birth certificate, to obtain that ID," Madison explained. "It's also a problem for college students because a college ID is not excepted for voting and out-of-state IDs are only accepted if the person had registered to vote within 90 days of the election."

Elimination of pre-registration discourages turnout among the youngest voters. Madison said it's critical for young people to be involved in politics and voting.

"We are the future," she said. "We are going to run things someday. People died for our right to vote and that's a responsibility that should be taken seriously."

Madison said that many young people might be discouraged from voting because people have made them feel powerless, and because it's tough to see the difference their single votes will make as part of the big picture.

"They feel like our challenges are so big, there's nothing they could do to change or fix things," she said. "Our history tells us that the true power has always been in the hands of ordinary citizens. Sometimes change takes a long time, but if people continue to work for change, it will come."

But young people have to understand the issues and speak up if they want things to ever change.

When Madison began speaking out against the new law last year, she was discredited for being so young. Many accused the whole campaign of being a publicity stunt by adults who wanted to use Madison's voice to get the voter ID law repealed.

However, just as many outlets acknowledged her hard work and allowed her voice to be heard.

"First of all, I'm honored that people in the news like Melissa Harris-Perry, Al Sharpton, and Alicia Menendez have taken me seriously, as well as too many writers than I could possibly name," she said. "I don't worry about the critics."

She said that many of the people who have not taken her seriously because of her age did so simply because they don't agree with her political views. She found this strange, since her fight for voter pre-registration would benefit young people of all political viewpoints.

"Some people have a very narrow view of what young people are capable of," she said. "Others just write things because controversy often increases the number of readers, and as a writer I can appreciate that. Regardless of the reason, I don't take it personally."

She said that, since she can't make people think any differently of her, she instead focuses on making a difference in the world.

"What I can do is continue to do what I do and try to make changes I feel can benefit my state and my country," she said.

Madison has made it a personal goal to have pre-registration restored in North Carolina by her 16th birthday in July of 2017.

"My big dream is to see pre-registration allowed in all 50 states," she said. "I really don't think too much about my life in terms of the distant future too much. I try to focus on what I want to be doing right now and how I can get there."

Madison said she is often asked if she plans to go into politics when she gets older. She hasn't decided quite yet.

"I have many interests and politics is just one of those," she said. "I like writing, so being a writer is always a possibility. The idea of being like Rachel Maddow when I grow up is pretty cool."

However, she wants to keep her choices as open as possible for now.

"Something I've learned over the last year is that if you just follow the path in front of you, it can take you places you never expected," she said.

Despite being in the national spotlight, Madison doesn't think her story is unique. She encourages others to fight for what they believe is right.

"My story could be the story of anyone who decides to do something to use their time and talents to make a difference," she said. "Pay attention, find the issues that are important to you, and take action. The world needs our beauty, the kind of beauty that comes from being true to ourselves and believing in ourselves. All it takes is one small thing to help make a difference."

To learn more about Madison Kimrey, be sure to check out her blog here. Tell us about the causes you are passionate about at SweetyHigh.com!