Madison Vorva and Rhiannon Tomtishen were 11-year-old Girl Scouts when they set off on a journey to save the orangutans. Quickly, their mission turned toward convincing the Girl Scout organization to remove an ingredient called palm oil from their cookies. 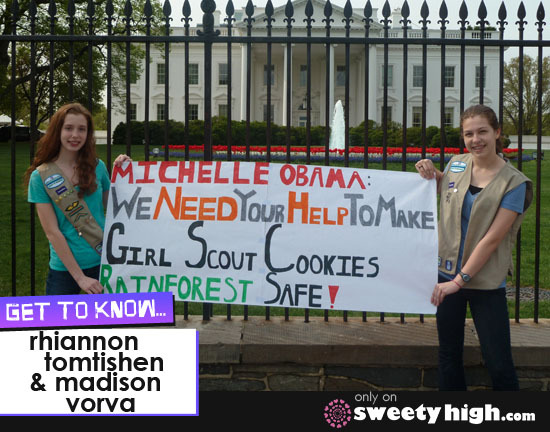 We recently spoke with the duo about their organization, Project ORANGS, and how their work has brought along big changes, including a pledge from Girl Scout Cookie manufacturer Kellogg to use deforestation-free palm oil!

Madison Vorva and Rhiannon Tomtishen met in 2007 when they were on a 7th grade basketball team together. Before long, the new friends realized they were both Girl Scouts. Together they decided to seek out a Girl Scout Bronze Award.

"We were inspired by Dr. Jane Goodall's conservation efforts for chimpanzees and decided to research other great apes," Madison said. "We came across the orangutan and decided to do our project around them."

Together they discovered that the orangutans' rainforest habitat was being destroyed to make way for palm oil plantations. Palm oil is a common ingredient in foods and cosmetics, appearing in about 50 percent of products in our grocery stores.

The girls' immediate reaction was to stop consuming products containing palm oil. But one item in particular gave them a big shock.

"We were checking everything for palm oil," Rhiannon said. "It was upsetting to find it in things like KitKats and chips and cookies, but to us that made a little sense. But when we flipped over a box of Girl Scout Cookies and realized that this incredible organization was contributing to these environmental and social issues we were really shocked and also kind of outraged."

Madison and Rhiannon thought it would be an easy fix.

"We'd send one email to the Girl Scouts and they'd realize a mistake had been made and then change their policy," Rhiannon said. "Unfortunately it didn't happen like that."

It became the mission of these two Girl Scouts to advocate for sustainable and deforestation-free Girl Scout Cookies.

"We were 11 years old at the time and had really grown up in this Girl Scouting organization, which teaches us girls to protect the environment, to speak out for issues we're passionate about," Rhiannon explained.

Together, the two knew they could instigate some kind of change.

The campaign started small. They started by making presentations to local schools and creating a petition. They also attended a conference for Jane Goodall's organization for young people, called Roots and Shoots. Dr. Goodall even signed their petition!

They also sent blank puzzle pieces to Girl Scout troops across the country to decorate and discuss why it was so important for the Girl Scouts to use a source of deforestation-free palm oil and protect the rainforests.

"We realized that we could partner with other nonprofit organizations," Madison said. "It was important for us to learn about the palm oil issue holistically, from the different perspectives of people, animals and the environment."

They also partnered closely with the Rainforest Action Network, Union of Concerned Scientists and Climate Advisers to develop online campaigns that were easily accessible to anyone interested in the cause.

The partnership resulted in a petition on Change.org that changed the game for Rhiannon and Madison.

"There were over 70,000 signatures and we had hundreds of people post on the Girl Scouts' social media pages, explaining that they should meet with us," Madison said.

Madison and Rhiannon had been working for five long years to meet with Girl Scouts representatives, and still they were having no luck. When the Girl Scouts started deleting the comments from their social media pages, the press got involved.

"We were all over the news, in The Wall Street Journal, Time, ABC and NPR," Madison said. "After all of that press we were finally invited for a sit down meeting with the Girl Scouts in May 2011."

At last, they met with the Girl Scouts at their headquarters in New York City.

"Walking out of that meeting we had a commitment from them to sit down and look at their policy," Rhiannon explained. "They told us they were willing and interested in working with us to strengthen where they get their palm oil from."

The two hoped to continue working with the Girl Scouts as they developed a plan toward sustainability. Instead, the organization promised to implement new sustainability practices in the form of being certified by the Roundtable on Sustainable Palm Oil, or RSPO, in fall of 2011.

When Madison and Rhiannon looked into what the RSPO stood for, they were disappointed.

"It's certainly better than nothing, but the Roundtable has a lot of loopholes in its guidelines," Madison explained. "The Girl Scouts agreed to RSPO commitments and something called GreenPalm certificates, where the Girl Scout organization is offsetting their use of palm oil but not changing where it's coming from."

But this February, Girl Scout Cookie producer Kellogg made a game changing announcement. They agreed to only purchase palm oil from sources that can prove that they are actively protecting rainforests and producing palm oil sustainably. The switch will be made by December 2015.

"Kellogg's announcement really was groundbreaking," Madison said. "They were the first American company to adopt these deforestation-free traceable guidelines. They go above and beyond the current industry standard, which is really pro-RSPO."

Under public pressure, Kellogg decided to move away from the GreenPalm standard.

"They understand that the palm oil in their products should be traceable, and how do you guarantee that it's not contributing to deforestation or human rights issues if you don't even know which plantation it's coming from?" Madison asked. "Kellogg's commitment is a strong symbol to the entire industry that it's time for sources of palm oil that are truly sustainable."

However, there's still a lot than can be done to let big companies know they should move toward sustainable palm oil.

"Anyone can write letters to these companies and tell them that they're concerned about palm oil supply," Madison said. "Supply will follow demand, and it's going to take a lot of us to show these companies that we want palm oil that is deforestation free."

Madison added that compared to other parts of the world, the United States doesn't use that much palm oil.

"The largest users of palm oil are China and India," she said. "In order for us to influence these global markets we need to pressure not only American companies but also large traders like Cargill, who sources most of palm oil worldwide"

Hopefully, Kellogg's move will set off a domino effect, and consumers will pressure other companies to adopt the same kind of sustainable practices.

As the girls have accomplished so much in the fight against deforestation, they have also spoken out for other young people. They fervently disagree with the saying "The youth of today are the leaders of tomorrow."

"Something we incorporated into our project as it has developed is showing other youth that they can follow their passion to create change," Rhiannon said.

"There's this horrifyingly embarrassing picture of us at our first ever presentation as two little middle schoolers with our homemade poster board," Rhiannon said. "We've gone from that to this really big national, even global platform, to stand on and talk about this issue. It's not necessarily that the youth of today cannot be the leaders of tomorrow, but they can be the leaders of today, in the moment."

She added that there is no reason at all that kids have to wait until they're adults to make a real and lasting impact on the world.

"We've tried to show youth that regardless of their age, their gender and their background, they can create change today," Rhiannon said.

Currently Madison is a freshman in college and Rhiannon is taking a gap year, and the two have been discussing the future of Project ORANGS.

"We're trying to identify how this issue that we're so passionate about can continue to fit into our lives as we move onto the next chapter," Rhiannon said.

Now, the girls are closer than ever to having their dream of deforestation-free Girl Scout Cookies come true.

"If Kellogg, this giant company, can do this, there's no reason the second baker of Girl Scout Cookies can't do the same," Rhiannon said. "Right now we're strategizing and trying to figure out how we can capitalize on everything that's happening to make either the Girl Scout organization or the second baker itself adopt a similar policy so that every single box of cookies is deforestation free."

We'd like to congratulate Madison Vorva and Rhiannon Tomtishen on their accomplishments so far, and hope Project ORANGS even more luck in the future!

For all of the latest on Project ORANGS, check out their social pages below, and if you're passionate about the cause join our community at SweetyHigh.com!