9-year-old Makenzie Lawrey is the author of a book called Mighty Mito Superhero, inspired by her younger brother, Gavin, and his fight with mitochondrial disease. 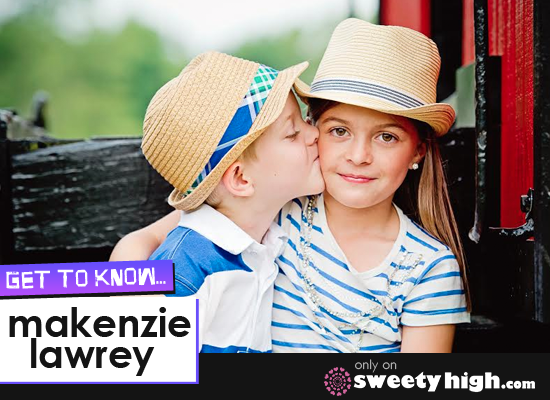 We recently spoke with the incredible young lady about the mitochondrial disease, or "mito" and her passion for finding the cure to help her little brother!

"Mito is a disease that zaps you of all your energy," Makenzie explained. "There are LOTS of mitochondria in our body and without it our bodies cannot work properly or in some cases we can die."

"Mito affects everyone differently," she said. "All people with mito have low energy levels and have a hard time keeping up with others because our mitochondria are what give our body all its energy to function."

Mitochondrial disease can affect different people in vastly different parts of the body.

"In Gavin, his brain and lungs were first and most recently he has started to have problems with his digestive system and his heart," Makenzie said. "Sometimes his heart hurts and it's hard for him to go to the bathroom and it hurts for him to breathe. He forgets things easily and has seizures, too."

Watching Gavin struggle with the disease made Makenzie want to help people with mitochondrial disease, as well as the people who love and care for them.

"I made the choice to write my book and try to raise one million dollars when my brother started to have a lot of pain," she said. "His body hurt so much that we couldn't even touch him because it hurt him and he cried."

When the doctors told the family they wanted to put Gavin into hospice, Makenzie set out to be a part of the cure.

Makenzie Lawrey got to work by sitting down and writing her book. It was called Mighty Mito Superhero, inspired by her Gavin as well as her family.

"I wanted other people to know what mito is and to help other families going through the same thing to know that they are not alone," she said.

In the book, even though Gavin has mitochondrial disease, he has a number of very special super powers.

"Being strong, being silly and being brave," Makenzie listed. "But, if you ask Gavin he would say it is to take away all the mito in the world."

Makenzie wrote the book because she sees Gavin as a hero in real life. He exemplifies all of the things that make him a superhero in the book.

"I didn't make anything up," she said. "I just wrote about who he is. He is brave in situations that I and most other kids would definitely cry in. He laughs when I would be scared."

"I know if I want to help find a cure it is going to take A LOT of money," she said.

She also spoke to her friends and classmates about Gavin and his unique disease to raise awareness.

"We do a lot at school now to raise awareness, and I have a big school," she said. "I have been on the TV and the radio too. I have had a few book signings where I talk about my book."

Makenzie has also spoken with Girl Scout troops to spread the word about mitochondrial disease, and even worked with the United Mitochondrial Disease Foundation, including organizing a team for the Energy for Life Walk in Tampa Bay.

Next, Makenzie's mom and her mom's best friend helped Makenzie in a giant fundraiser called "The Green Carpet HOPE Event."

"We had over 200 people there and it was great," Makenzie said. "We went out to our community to educate them and get donations for a silent auction."

Makenzie and Gavin's friends also joined together for a painting party, where they created paintings inspired by the word "hope." The painted canvases were then raffled off.

Makenzie's efforts have paid off. With the help of a local non-profit, Butterflies of Hope, her team has raised $67,000. The charity was formed by a friend of Makenzie's mother, who lost her daughter to mitochondrial disease at the age of 3.

"Her brother Drew is the same age as me and as soon as he heard about my mission he wanted to help me," Makenzie added.

Makenzie's work has raised a lot of money toward her cause, but she's only just begun.

"I'm really thankful to everyone who has donated to my million dollar mission so far," she said. "But I still have a lot to raise. I hope people will continue to donate and see how important this is."

You can help make a difference in Makenzie's cause, and buy Mighty Mito Superhero, by checking out the links below. You can also join us at SweetyHigh.com to share more stories of amazing girls making a difference in the world!