Mandy Jiroux might be best known as one half of The Mandy and Miley Show featuring Miley Cyrus, but today the star is a singer, songwriter, DJ, dancer, choreographer and much more! 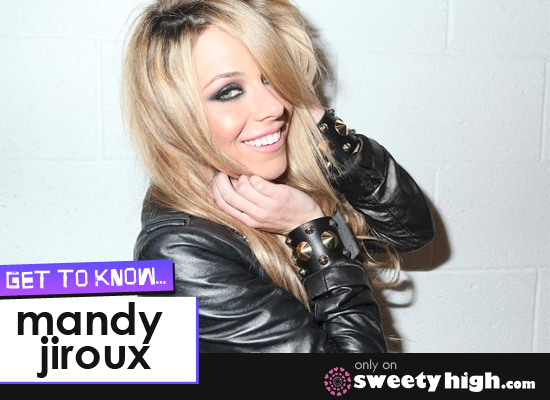 We recently spoke with Mandy to discuss each of her various talents, collaborations and her upcoming songs "Tonight" and "My Forever"!

For two years, best friends Mandy Jiroux and Miley Cyrus co-hosted a YouTube channel called The Miley and Mandy show, where the two blogged and documented their friendship.

Mandy said the duo never made videos to get noticed, but their personalities and humor drew in a lot of attention from fans from across the world.

"Miley and I first created the YouTube show for fun and it went from there," she said.

Mandy Jiroux learned a lot about running a YouTube channel from her time on the show. When it was time to create her own channel, she knew she wanted to share her dancing and DJing , but knew she also had to let her personality shine through to succeed.

"The Miley and Mandy show was all about our personalities," Mandy said. "It reminds me that as well as creating dance content, I still needed to show my personality and make funny vlogs and videos."

Mandy started her current YouTube channel in February of 2013.

To Mandy, it was obvious that her passion for health and fitness would be a part of her channel.

"Growing up as a dancer, you're constantly working out," she said. "You constantly have to keep your body fueled and energized with the proper food and things like that."

Another staple of Mandy's channel is her music video dance tutorials. She recently made videos teaching the moves to Little Mix's "Salute" and Ariana Grande's "Problem" music videos!

"To break it down, I have to watch the videos over and over again to be able to really figure out what moves they're doing," she said. "But breaking it down and teaching it as a routine comes naturally to me. I've been teaching dance since I was in high school. It's really fun for me."

Mandy is also known for her phenomenal singing voice. She was recently asked to collaborate with YouTube editor, musician and arranger Kurt Schneider and singer Chester See.

"Collaborating with Kurt and Chester was super fun," she said. "I was really excited about it because I've been following their YouTube channels for years, and when I found out that I had the opportunity to work with Kurt I was really excited. Those boys are so talented and inspiring so it was really great to work them."

She explained that Kurt Schneider does the arrangements for all of his medleys. She recorded a medley of songs by Zedd with Kurt and Chester. She spent time with the duo in the studio to record the track before filming it the next day.

"It was actually a pretty quick process, but a great one," she said.

"What inspires me when I'm in the studio and creating my own music is pretty much what I'm going through at that moment in my life," she said. "The music I'm coming out with really represents my life experiences, the good and the bad."

She added that writing about her own personal experiences has been a great way to connect with her fans.

"It's great for them to be able to relate to you, and it also shows them they're not alone if they're going through something," she said.

"It was awesome working with them," Mandy said. "'Tonight' is a really fun dance song and I think people are going to love it. I was just really flattered when I heard that Fagault & Marina wanted to have my vocals featured on their track because I fell in love with it instantly."

Mandy Jiroux has a list of quite varied talents on her resumé. We asked if the multi-hyphenate dancer, fitness guru, singer and DJ had a single biggest passion.

"Dance is where I started, and I think that will be my main passion forever," she said. "But these days it's really hard for me to pick one favorite thing, particularly because I'm just really passionate about them all. I feel like they kind of all go hand in hand, because when I perform, I'm singing, dancing and DJing."

Mandy also has another track called "My Forever" coming out this summer, which she cowrote with Starkillers. Soon after the release of these songs, some original music by Mandy Jiroux will follow!

For even more on Mandy Jiroux, be sure to follow her on her social channels listed below! You can also join us at SweetyHigh.com to create a channel and share all of your unique talents with our sweet community!