When the first announcement trailer for Mario Kart Live: Home Circuit dropped, I couldn't believe what I was seeing.

Had Nintendo really created a Nintendo Switch-powered remote control car, with augmented reality to make players feel like they were truly driving through Mario Kart-style tracks in their homes? It looked cool, but almost too good to be true—almost like the Nintendo Switch console had been itself more than three years ago, before fully living up to all the hype around it.

So when the folks at Nintendo offered me the chance to check out the Mario Kart Life: Home Circuit Mario Set (complete with the necessary Mario remote control car) I had to take them up on it. After setting it up and revving my engines over the last week or so, here are my first impressions.

The AR Is Next-Level

Once you have your kart synched with the game, the immersion is astounding. The camera (which connects to your Nintendo Switch via the internet) instantly transmits what it sees to your Switch, putting you right above the kart and making you feel like you're fully playing a digital video game. Mario and your kart are totally animated, but somehow the world they exist within is your home. 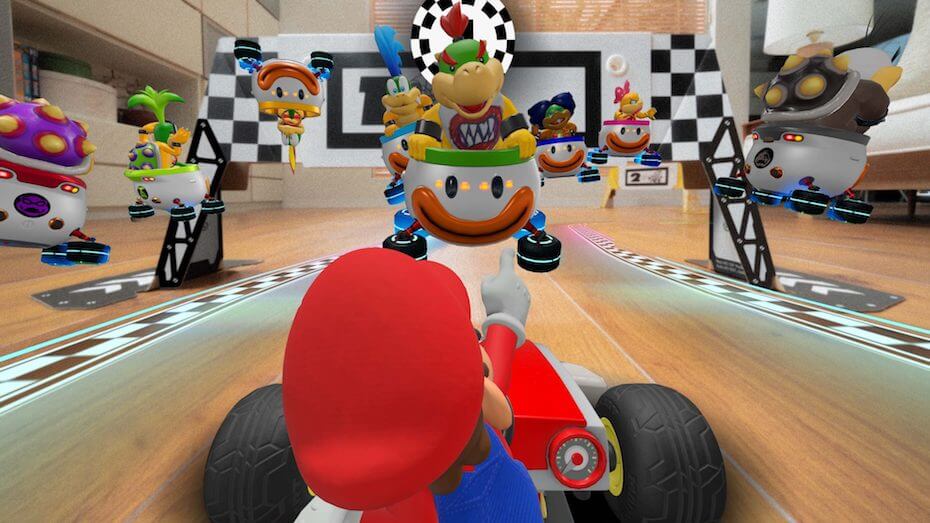 Of course, simply driving laps around your kitchen would probably get dull pretty fast. That's why this game is all about building one-of-a-kind courses. You create them by placing four easy-to-fold gates on your floor, and then driving through them in the path of your course.

Then, the full fun begins. The game populates the land with augmented reality competitors, as well as obstacles, powerups and even weather that can change the course of the game, all through the track you just created. For extra challenge, you can add real-life hazards to the course. While computer-generated racers won't be able to hit them, they also can't take advantage of any of the shortcuts you create.

The way the analog and digital blend in this game is next-level, too. For example, if I accidentally ram into a wall, my kart on-screen shakes and I lose coins. Similarly, when an enemy tosses an in-game weapon at me, or I slip in a puddle, the cart flounders in its tracks in real-time. Mushrooms actually give the kart a boost, Chain Chomps will drag it every which way, and sandstorms will blow you across the floor. There's even a Magikoopa who'll feed you a mirror image of the level—something that's totally befuddling in AR.

I didn't even think it'd be possible to incorporate a drift feature into this remote-controlled kart, but they've done it. It can be a bit slippery on slick surfaces, but that only adds to the fun, sending Mario across the course Tokyo Drift-style. Maybe I shouldn't be this impressed with it, but it's incredible—and I think this might be just the start of what this type of technology can do.

Once you're into it, it's truly bizarre to be looking at your screen, zipping through these impressive courses at breakneck speeds, and then to gaze down at the actual kart and see it amble along the floor. The game really convinces you that you're somewhere else, going so fast, despite the familiar setting. And I have to say that, more than once, I glanced over at the IRL kart only to be surprised I wasn't driving around a bulldozer and Mario wasn't dressed as Santa Claus, because that's what I had them set to in the game.

The Customization Is Impressive, Too

The makers of Home Circuit understood that repetition doesn't always breed fun and fast gameplay, so they gave us the options to customize and create to our hearts' content. For example, if you want to race in a new course, you'll get the most out of it by getting up and moving stuff around. That can be a big hassle, but it's all part of the fun.

That means new track environments, music and gate settings, which can all be adjusted to create your perfect track. Not to mention all of the different karts and adorable outfits Mario can wear. Put simply, the content variations here are basically infinite, and you'll get more out of it the more you're willing to put in. 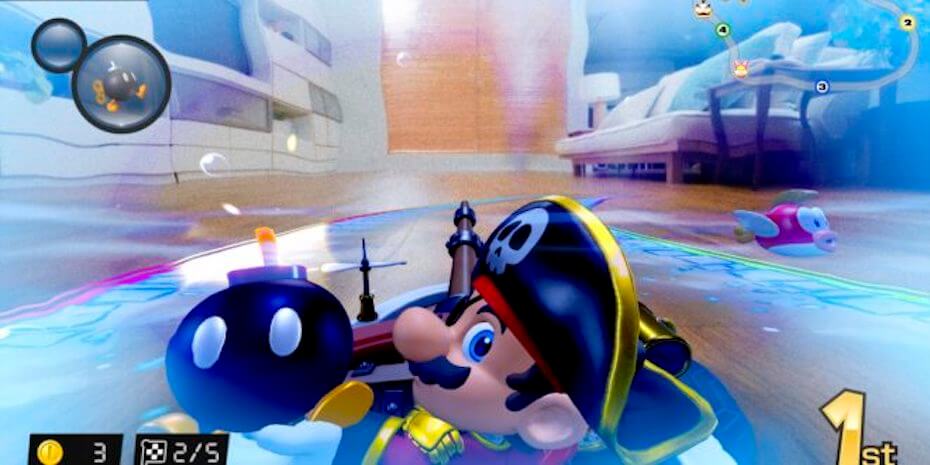 It's Surprising How Little Space You Need

My household is undergoing some major home renovations right now, so what would normally be free floor space is crowded with stacks of wood flooring and furniture shoved into odd corners, and nothing is level. I thought that would mean I couldn't race at all upstairs, but I was sorely mistaken. I was honestly shocked at how well the car runs over carpet and bumpy tile. And while I wasn't exactly winning races when I occasionally got snagged on something, it was still quite the spectacle to make it all the way through this space again and again.

Nintendo recommends at least a 10 x 12-foot space for playing the game, but I've managed to make it work in much smaller areas in a pinch. While an epic track through an open-concept home is always going to wield the funnest results, even the simplest and most stripped-back of courses can be loads of fun. If you're a fan of Baby Park from the games, you know what I mean. 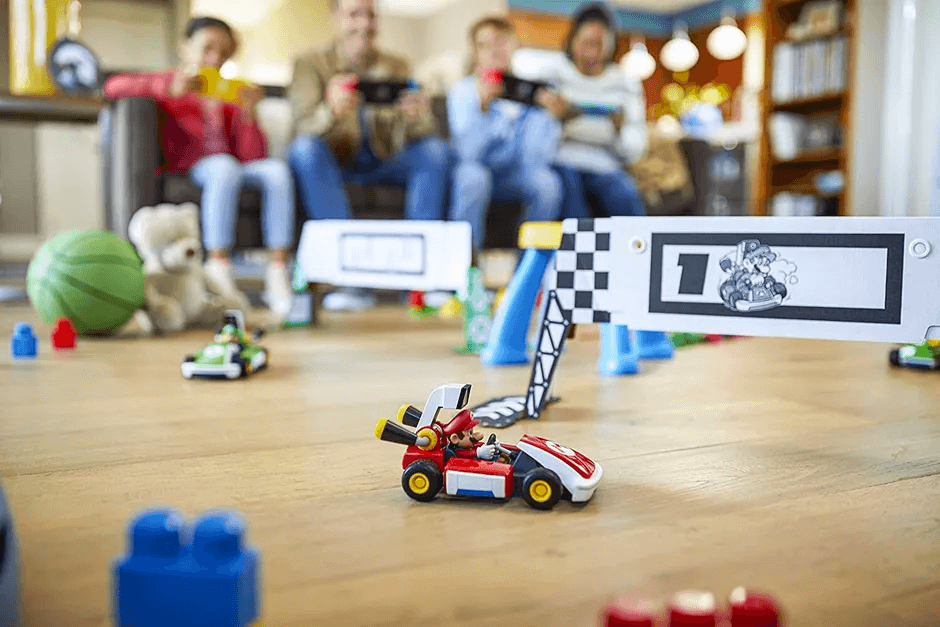 The game and the kart connect to each other via wifi, so you'll want to race somewhere you have a strong internet connection. Remember, this isn't just a remote control car—you're also seeing everything from the perspective of the car as it drives, so a strong connection is essential.

When I've gone a little bit overboard in my course building, I've absolutely run into spots where the camera gets staticky and cuts out, and I no longer have control over the car. But if anything, doing this again and again has helped me pinpoint the areas of my home with the weakest wifi, allowing me to avoid them when creating future courses.

Sadly, You Can't Capture Game Footage Out of the Box

The one thing I don't love about Mario Kart Live: Home Circuit is that the capture button is disabled for this game, meaning you can't take screenshots of your races, or hold down the button to get footage of what you're doing. This game can truly be full of incredible, totally organic moments that spring out of your own creativity and what happens inside your home, and so it's a shame that I can't easily snap a pic when something wild happens as the kart zips around. I keep finding myself instinctively pressing the button, and then being told that I can't. However, that doesn't mean there's no way to get your footage. If you stream games, for example, your capture card should work for this game exactly as it does for the others.

Messing With Pets Is the Best

To be fair, the main reason I'm upset about the lack of screenshots is that I'd love to capture some funny footage of the way our dog, Horace, reacts to the kart. He always stares at the zipping car with a mix of curiosity and trepidation, backing off when it gets too close, and then sometimes barking at it when it speeds away, and he knows it can't get him (at least until the next lap). My in-game ID is even a picture of him staring the kart down.

And yes, competing in races is the meat and potatoes of the game, and what all of its features are designed for highlighting. Even so, I think I've spent even more time outside of the races just exploring, testing the limits of the kart and yes—harassing puppies.