Does Mario Sports Superstars Deserve a Spot In Your 3DS Collection?

Mario is no stranger to sports games, and his latest release, Mario Sports Superstars for the Nintendo 3DS, combines five sports into one game. But is the new game worth your time?

Featuring soccer, baseball, tennis, golf and horse racing, Mario Sports Superstars has a little something for everyone—and enough content that you can get a lot out of the game even if you're not in love with every one of the sports in it. Sports fans will love entering the fray of their favorite games, and non-fans just might be converted by the gameplay. 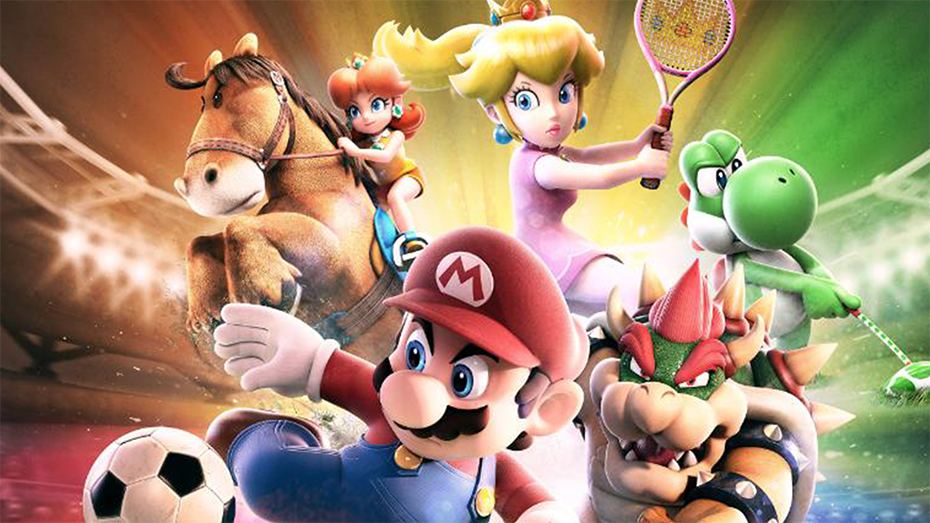 Each sport has its own unique features and various modes so you can play against a computer or with friends nearby or online and compete in tournaments to level-up, get coins and unlock goodies like new courses and characters.

There are 16 main characters to start with from all over the Mario universe (with two additional characters that can be unlocked later) who each have their own unique stats within different sports. While Mario and Luigi tend to be more balanced characters, bigger characters like Donkey Kong and Bowser are more powerful, Baby Mario and Diddy Kong are fast on their feet and princesses Peach and Daisy have improved technique. Depending on the sport you're playing, you'll want to take these stats into account and pick characters who'll benefit your play style.

Of course it's mostly about the sports, and this game does a good job capturing the energy of each one and putting it into game form.

Strategy is critical when it comes to picking your team for soccer in Mario Sports Superstars. In addition to picking two of game's main characters as your captain and assistant captain, you'll also decide who fills out the rest of the roster. These teammates all come from the same group of minor characters, from Red Toads to Yellow Flying Squirrel Toads, Magikoopas and my personal favorite, Spikes. Once you've selected your goalkeeper, either Boom Boom or Pom Pom, it's time to start the game.

The gameplay in the soccer segment here is simple but effective. You start the round controlling either one of your team captains, and as you pass the ball to your teammates, your control switches to that player. Like in real soccer, your aim is to successfully dribble and pass the ball all the way to your opponent's goal before making your winning kick.

But this can be trickier than it sounds. The strength of your kick is determined not only by the characters you've selected, but by a timed button press. It can be tough to know exactly where to stand and how hard to kick to get the ball past the goalie, and if you're like me it'll take lots of tries to nail it. It's also wise to pass to your more talented team captains to make the goals, as the rest of your team isn't as skilled.

When you lose control of the ball, swapping to another player isn't the most responsive function, but there's something about this that feels more like a real soccer game. Once you've lost the ball, it's out of your hands until you regain it. Still, there's something slightly painful about your team's goalkeeper failing to block because you couldn't get there in time—but every one of those failures makes you want to play again and win. 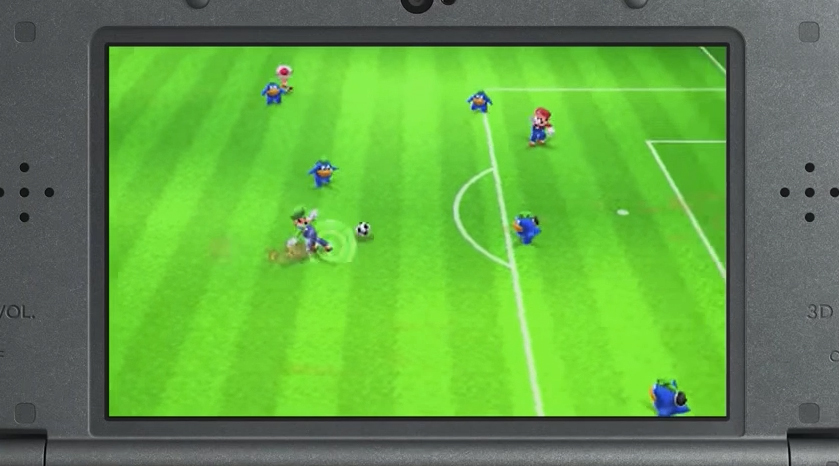 Carefully selecting your team is just as important in baseball as it is in soccer. In addition to picking your team and assistant captain from the main characters, you'll be filling out the rest of your team with a variety of more minor characters including a Goomba and differently colored Paratroopas, Penguin Toads and Shy Guys, all with unique stats. They also have different pitches, which can make the difference between victory and defeat.

While I typically find actual baseball a bit of a bore, I actually love the baseball in Mario Sports Superstars and liked the system better than in other baseball games I've played. As the pitcher, selecting specific pitches for each batter to try to stump them feels strategic instead of random, and there's an element of skill involved with the timed button press. It's also fun to play with different pitchers to see how their throws varied.

As the batter, it's also satisfying to anticipate the type of pitch is coming and evaluate whether or not you'll be able to fit in an extra heavy swing. Once you've pitched the ball or swung the bat, the AI characters take care of the rest, which is fine by me. 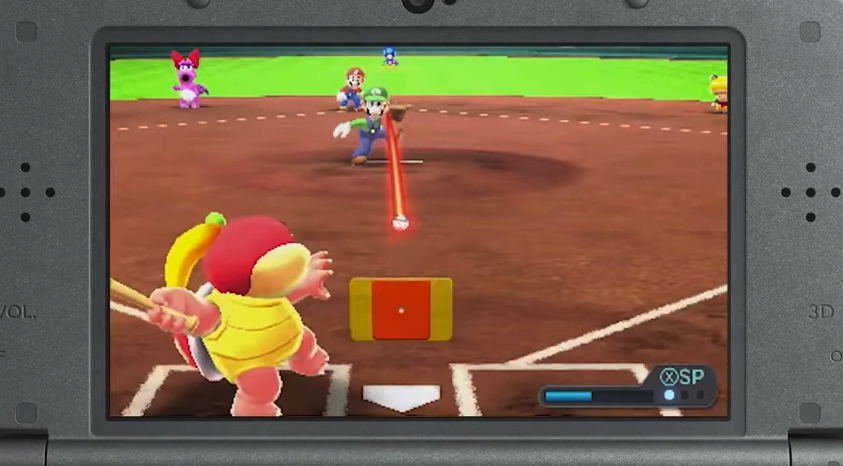 The tennis in Mario Sports Superstars plays a lot like Mario Tennis Open, which is a really good thing. You can play a round of singles or doubles using the core set of characters, and the core mechanic revolves around flat shots, simple shots, topspins and slices to try to best your opponent.

However, this tennis game also incorporates special moves. If you stand within glowing circles on the ground and push the correct button at the right time, you can pull of special shots that will send the ball flying across the screen and make it tough for your opponent to hit it. There's also a touchscreen interface to access certain moves with ease. While this approach isn't particularly innovative, the gameplay remains as frenetic, tense and fun as ever. 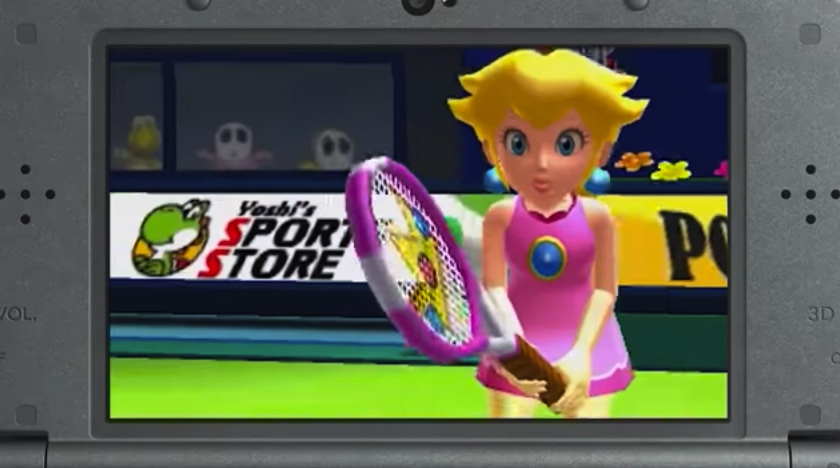 Call me weird, but I love golfing in video games, and this one is no exception. The golf in Mario Sports Superstars borrows heavily from Mario Golf World Tour, which can only help it succeed. It's my personal favorite of the five sports included in the game.

Like in the other games, you'll want to think hard about the character you take onto the course depending on your play style. Are you willing to trade distance for precision? Do you like a character's swing to be completely straight, or slightly curved?

Again, the golf portion of the games doesn't win any awards for reinventing the wheel, but it doesn't have to. It operates on the same careful aiming, club-selecting and timed button-pressing of most golf games out there. I appreciate that it wasn't broken, so they didn't fix it. 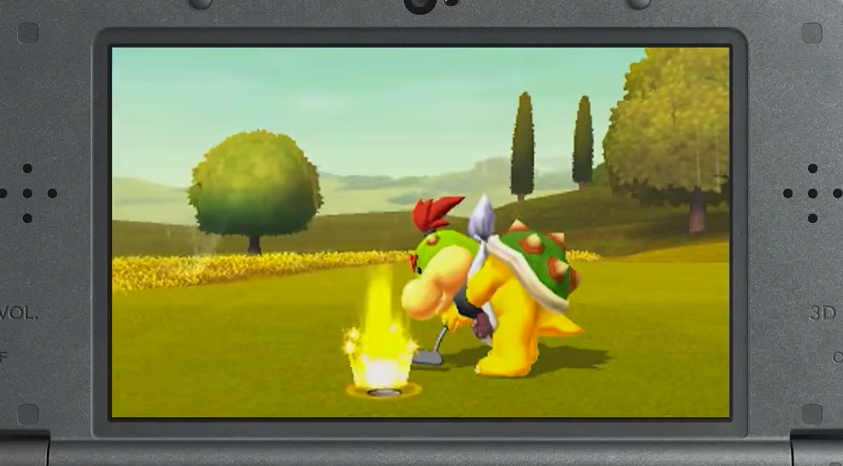 And last but not least is probably the most fleshed-out of the games on Mario Sports Superstars, the horse racing. At first, I felt that the horse segment of the game was the weakest of all five of the sports, but more time with it made me change my mind.

The horse racing game has a stable where you can create and customize your own horses, picking their gender, main strengths and different appearances and stats. Once you've made your horse, the section is a bit like Pokémon Amie or Pokémon Refresh from the recent Pokémon 3DS games where you can pamper and feed your horse to improve your bond with it, in turn making it more effective in races.

The races themselves are pretty standard, pitting you against other players in a contest to first place after a three-lap race. Throughout the track you can collect stars, which allow you to use boosts, and carrots that fill your stamina and keep your horse running at its top speed. Your enjoyment will probably vary based on your love of horses and whether or not you find the game challenging enough to stay interesting.

While I personally don't see myself doing much of the racing, I think I'm going to spend a lot of time personalizing ponies and making them adore me. 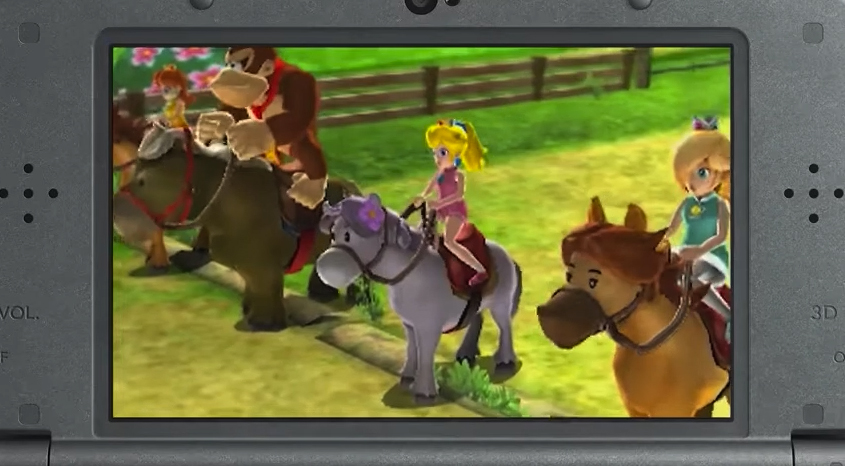 Mario Sports Superstars also has its own unique set of Amiibo cards that unlock features within the game. Unfortunately, I wasn't able to test out this feature myself due to lack of physical cards, but as someone who loves collecting things I am loving the in-game card sets.

Using coins you earn throughout the game, you can "purchase" digital versions of more than 300 cards to add to your in-game album. While the rewards you get for collecting the non-physical cards are merely cosmetic, it's still fun to try to collect every one.

Overall, I think Mario Sports Superstars is a ton of fun and worth your time if you enjoy sports titles. One major downside is that there's no download play, meaning friends will need their own copy of the game to play the multiplayer modes with you. Of course, the more players, the merrier.

If you don't already own other Mario sports games like Mario Tennis Open and Mario Golf World Tour, this one is a must-have, and even if you do, the extra sports might make it a worthwhile addition to your 3DS collection.

Think you're a Nintendo expert? HERE are 10 things we bet you didn't know about Mario.