10-year-old Marlowe Peyton is a young actress who has appeared in a number of films as well as TV shows including Jessie, How I Met Your Mother and Parenthood. Her latest movie, Dance-Off, is out on October 7! 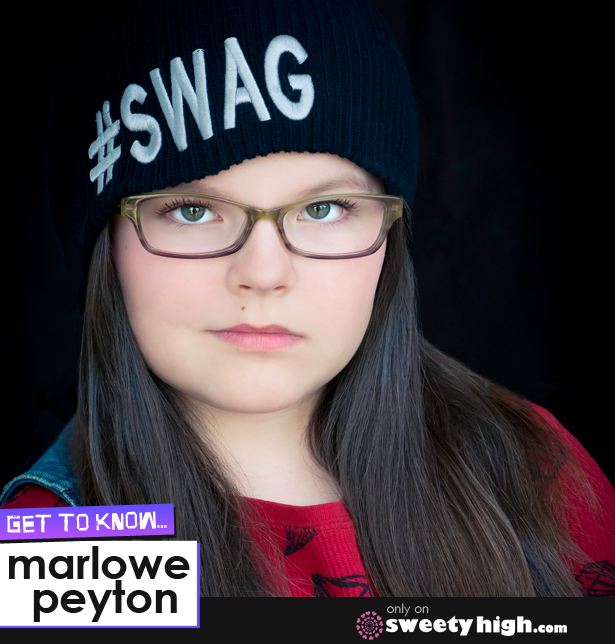 Marlowe took some time to speak with us not only about her upcoming movie release, but also her passion for acting, most memorable roles and more!

Marlowe Peyton decided that she wanted to act when she was just 4, following in the footsteps of her older sister, Merit Leighton.

"I had to beg my mom to let me act," Marlowe said. "My mom thought that I was doing it to be like my big sister and wasn't sure if it was really MY passion."

One day, Marlowe tagged along to a meeting with Merit's manager. She let the manager know that she wanted to act, too, and the rest was history.

"My first audition was for a feature film and I booked it," Marlowe said. "That's when I knew for sure that I wanted to do this forever. I love pretending to be other people. I love working and I can't imagine doing anything else, except singing…I LOVE to sing!"

Marlowe said that she loves acting, as well as singing, because they give her a chance to work out her creative side.

"One of the most rewarding things about acting is creating," she said. "Every job, every character is new."

Since the beginning of her career, Marlowe has appeared in films and television series including The Back-Up Plan, Parenthood, and How I Met Your Mother.

Earlier this year, Marlowe also starred in a commercial for the girl power engineering toy, GoldieBlox, which aired during the Super Bowl! In the ad, girls take all their pink toy castles, kitchen appliances and dolls and use them to build a rocket!

"The rocket was HUGE and super cool," she said. "It was exciting to be 'rocket girl,' especially when it blasted off."

Marlowe was also one of the few girls in the ad who was chosen to sing the theme.

"I got to sing and do a bunch of recording sessions which I loved!" she said.

The experience also introduced Marlowe to a couple of incredible friends: Francesca Capaldi from Dog With A Blog and Crash & Bernstein's McKenna Grace!

When it came time for the ad to air during Super Bowl XLVIII, Marlow's family and friends were watching the game and waiting for the commercial. But then something strange happened.

"Our cable company went DOWN right as it was about to be shown on TV!" she said. "So I never actually saw it during the game BUT Francesca Capaldi and her mom were so nice and FaceTimed me so I could see it on their TV."

Perhaps the biggest of Marlow's films so far is Dance-Off, a film about competition dancing.

"Our family loves So You Think You Can Dance and Dancing With The Stars, so when I booked the role of London as Kathryn McCormick's little sister, it was pretty exciting," Marlowe said.

"Jasmine is an amazing dancer involved in the dance competition world," Marlowe explained. "London, on the other hand… well let's say she 'tries' very hard to be a good dancer, but there is room for improvement."

While a lot of movies about dancing have been made in the past, Marlowe explained that Dance-Off covers an entirely different element of the dancing world.

"What makes Dance-Off different is it's NOT a dance competition movie; it is a movie about "Competition Dancing", which has never been done before," Marlowe said. "Competition dancing is a world-wide sport for kids age 5-18 so it's pretty cool to have a movie based on all those talented dancers!"

And because Dance-Off features a lot of different dance styles, from contemporary ballet to hip hop/tap fusion and more, Marlowe said that the movie has something to offer for everyone!

"The dances were created by today's hottest choreographers from So You Think You Can Dance such as NappyTabs, Stacey Tookey, Justin Giles and Ade," she said. "Many of the dancers in the film started as comp kids, including Shane Harper, who was discovered at dance competition. So make sure you check it out!"

Dance-Off releases for rental and download on October 7, and will also be available on cable and satellite on demand.

For even more updates on Marlowe Peyton, and her role in Dance-Off, be sure to check out Marlow's social pages, listed below! You can also join us at SweetyHigh.com to tell us how excited you are about Dance-Off!