Why I'm Obsessed With These Spider-Gwen, Squirrel Girl and Ms. Marvel Action Figure

When I was planning out my schedule for San Diego Comic-Con earlier this year, the Marvel Rising panel was one of my must-sees.

While I didn't yet know a lot about the upcoming series (consisting of a digital short series, movie and various TV specials) I did know that it prominently featured some of my favorite little-known Marvel characters, including Spider-Gwen, Ms. Marvel and Squirrel Girl, and I delighted in seeing the stars gush about this butt-kicking, girl-centric series.

Since then, I've adored the shorts, as well as the film Marvel Rising: Secret Warriors, and I look forward to the two releases that are still on the way. In the meantime, I was sent Hasbro action figures of some of the show's most prominent characters for review, and they're pretty spectacular. 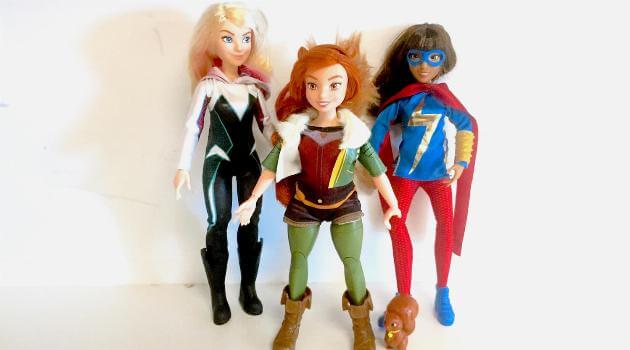 With Spider-Man: Into the Spider-Verse releasing later this week, it's a very good time to be a fan of Gwen Stacy's superhero alter ego. In a different timeline, it's Gwen who gets bitten by a radioactive spider—not Peter Parker—and she winds up as the web-slinging superhero instead.

The Gwen figure has a sly smirk, a flash of bright pink in her hair, and an outfit that's totally befitting her punker persona. She is the drummer in a band, after all. I particularly love her frayed spider shirt, high boots and the nice touch of a flannel tied around her waist. 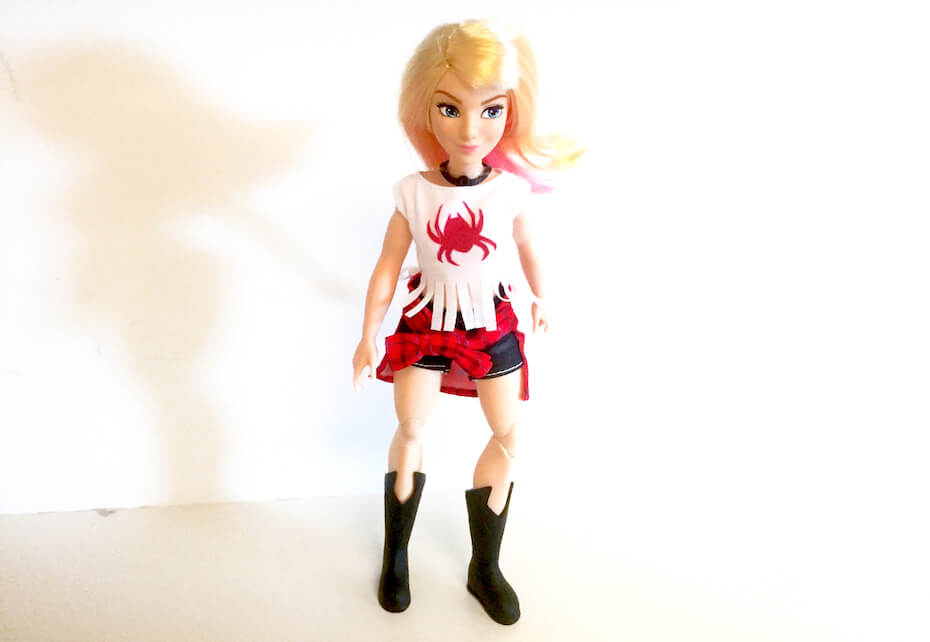 But her superhero outfit is even more iconic. While she's best known to fans as Spider-Gwen, in Marvel Rising she needs to keep her identity on the DL and is instead known by Ghost-Spider. Her signature look is a white and black suit with pink webbed accents—particularly around the arms and in the hood. It's a little tough to get her one-piece costume on, but it's worth it because she looks so cool. 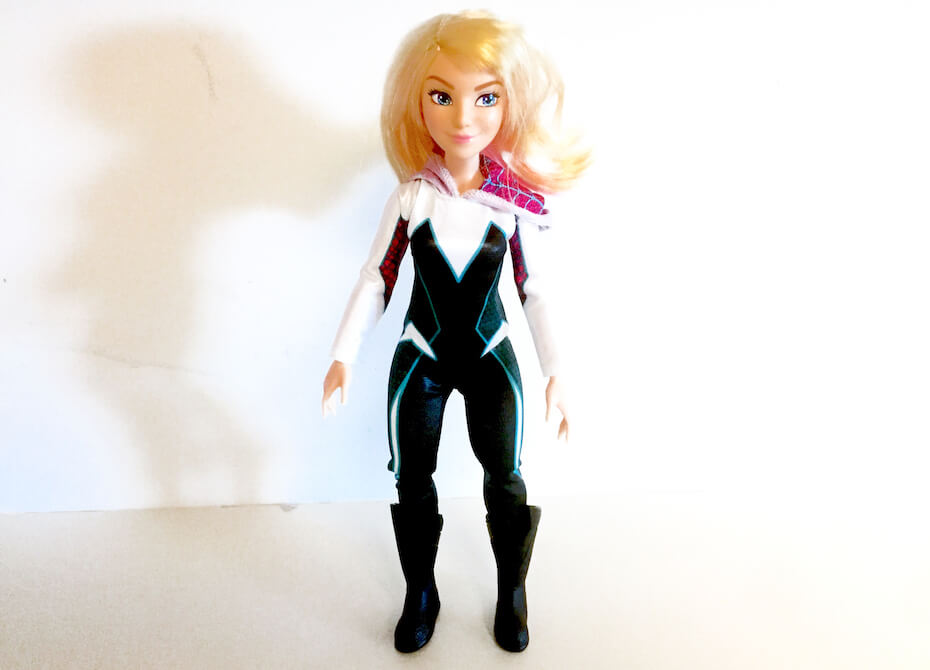 Kamala Khan is a Pakistani American teenager who discovers she has amazing stretching and shapeshifting abilities because of her Inhuman genes. After her biggest hero, Carol Danvers, changed her name from Ms. Marvel to Captain Marvel, Kamala decided that she could be Ms. Marvel in her stead.

For whatever reason, Ms. Marvel's Marvel Rising figure is the only one not to come with an alternate outfit, but that doesn't make her any less cool. Out of the box, she's equipped with her "embiggened" fist, ready to clobber any bag guys who cross her path. 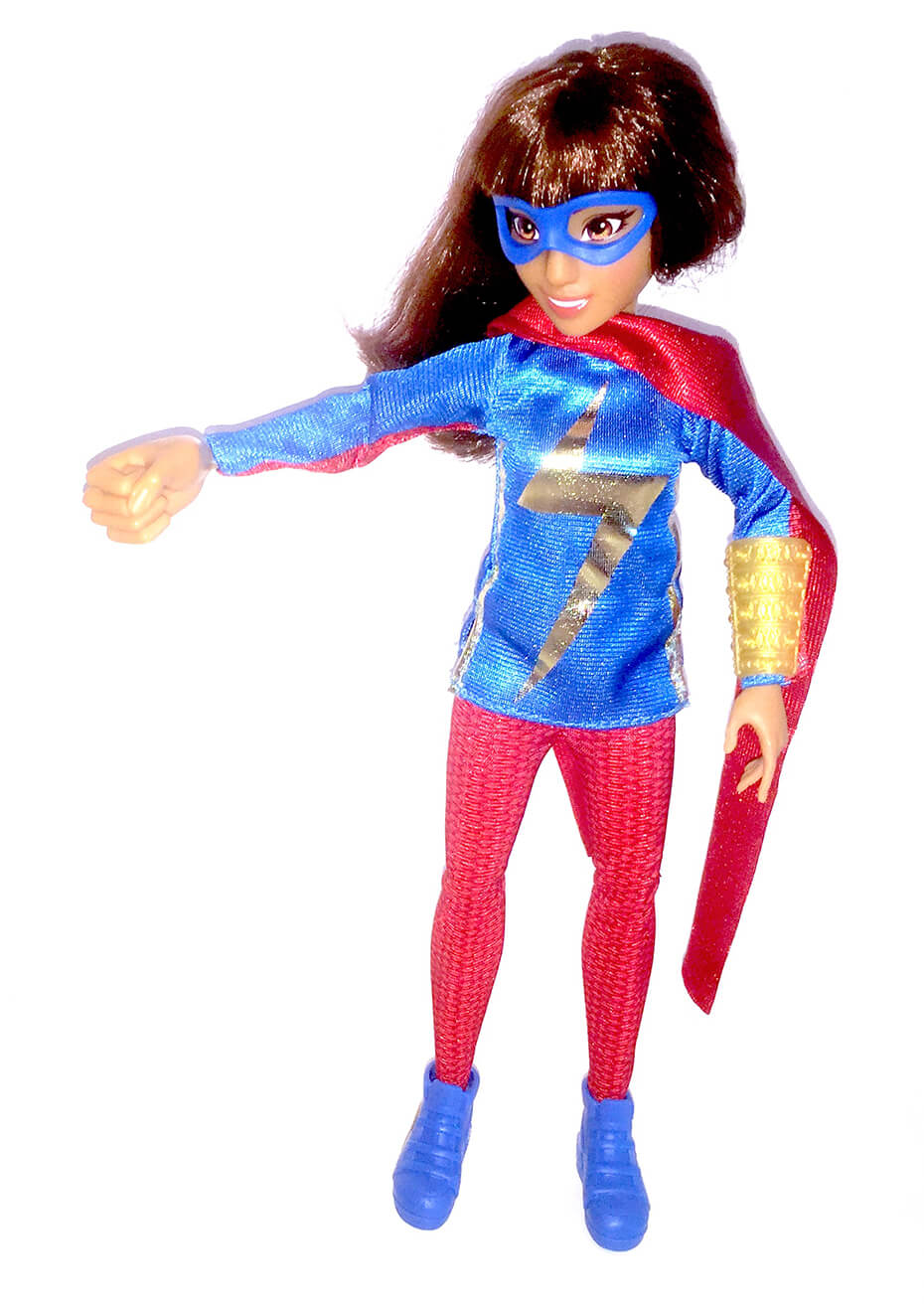 While her action figure doesn't have much in the way of accessories, it does come with a normal-sized hand. Replacing her giant hand for a regular one is easy as gently pulling one out and popping another in its place. Her domino mask is also removable for a more casual look (even when she's still in full superhero mode). It would have been nice to have a civilian ensemble for her, but the figure is still super cute. 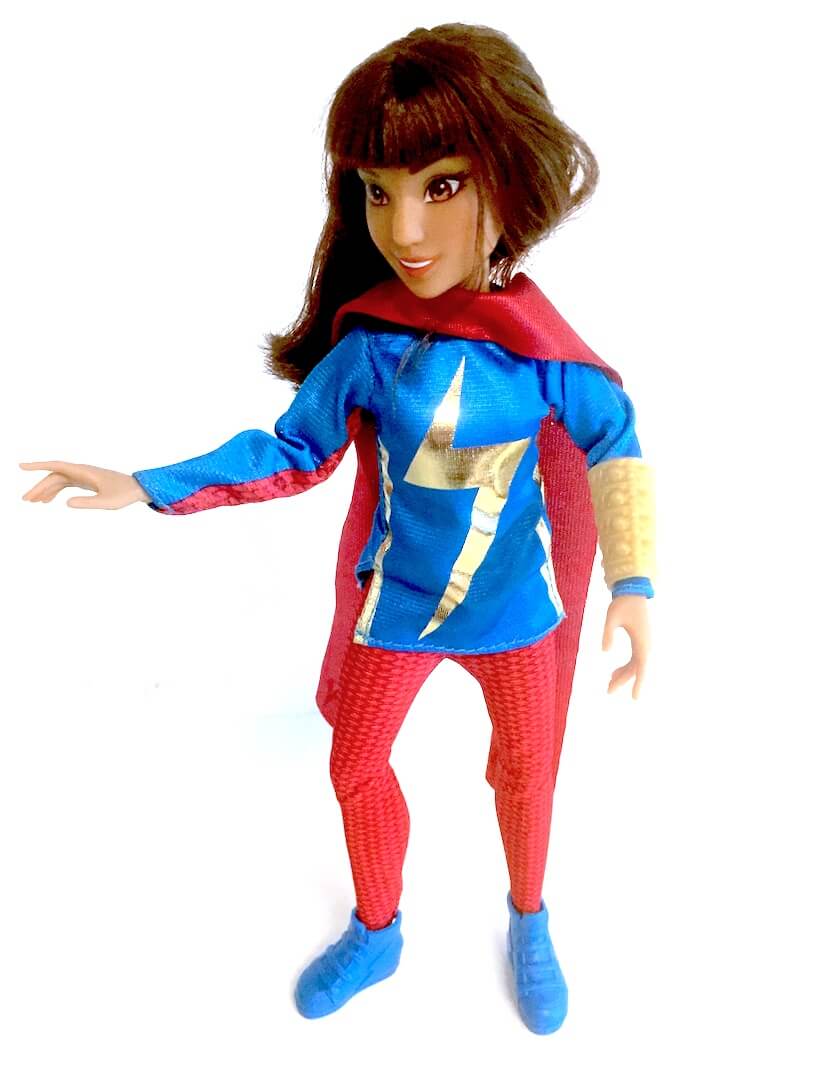 Last but not least is Doreen Green, the unbeatable Squirrel Girl, who's probably my favorite underutilized Marvel character. She was born with the ability to communicate with squirrels and also has other squirrely abilities, like climbing and biting, and even has a massive fluffy tail like a squirrel's. And did I mention that she's single-handedly beaten Thanos?

Of the three figures, she definitely has the largest number of handy accessories as well. Her everyday outfit comes complete with boots, a hat, a handbag and a necklace—though her Squirrel Girl costume is where she really shines. 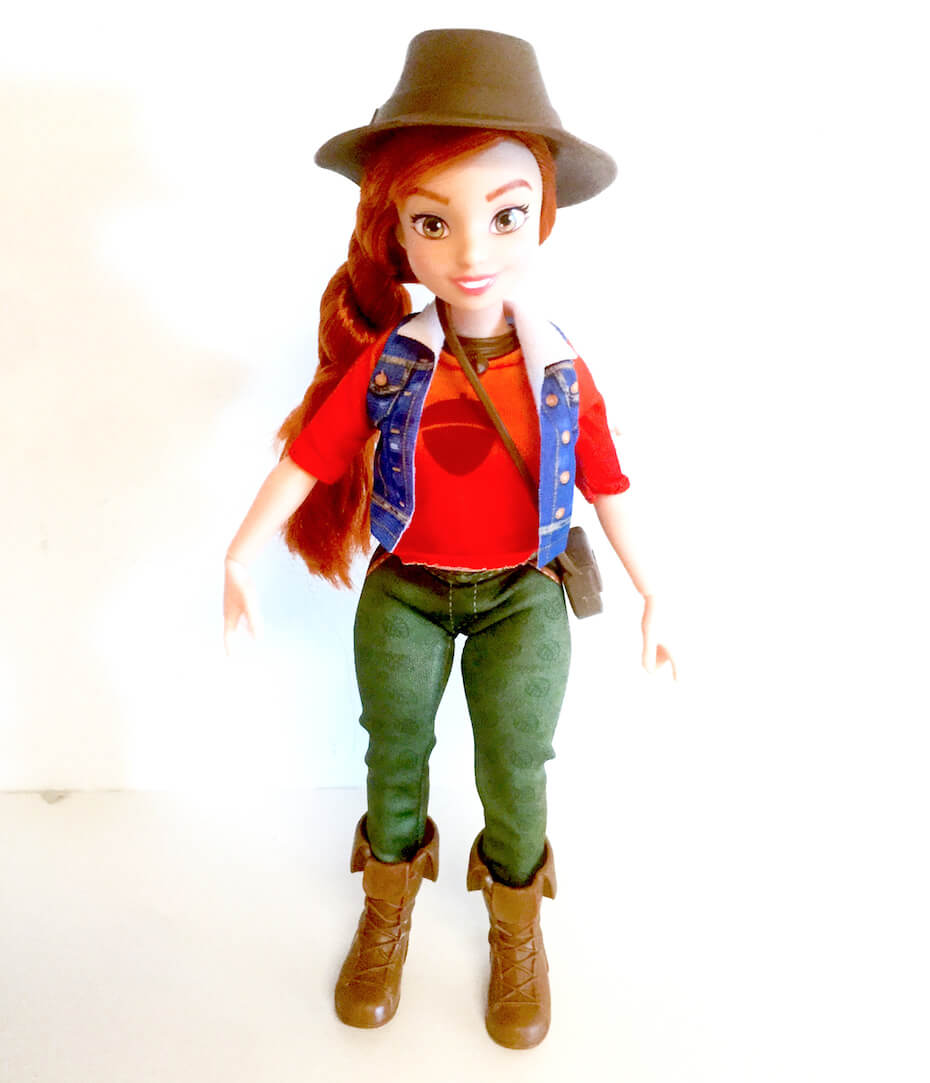 Squirrel ears! A big, furry squirrel tail! Tippy-toe, her sidekick squirrel! That's a lot of squirrely goodness in one place, and each of these accessories brings out what's so fun and weird about the character. I hope that it might inspire others to enjoy Squirrel Girl stories as much as I do. 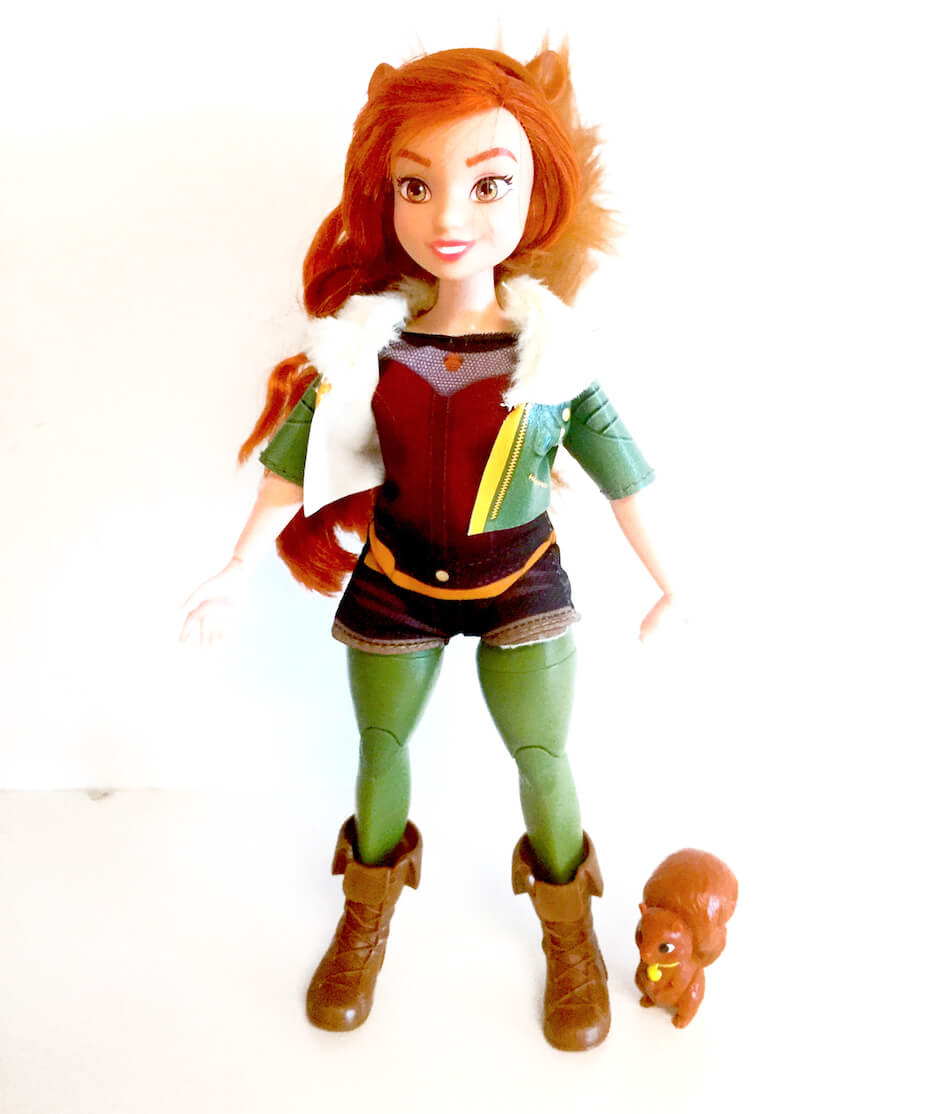 If you're as excited for Into the Spider-Verse as I am, click HERE to read my prediction about 2018 finally being the year of Spider-Gwen.