Mattie Richardson is a young published author from North Dakota best known for her creative novels, which are told from the points of view of horses. 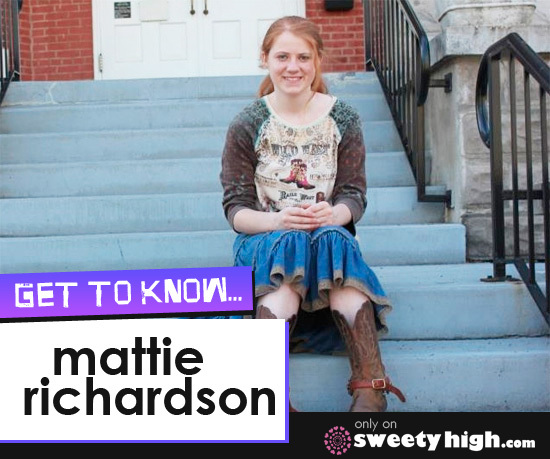 We chatted with Mattie about what inspires her to write, upcoming projects, and more in a recent interview!

Mattie Richardson has always loved to write. In fact, she finds it odd that there are people who don't enjoy writing.

"My first 'story' probably came about around the time I was six or seven," Mattie said. "I finished Appaloosy when I was thirteen, and from that point I have never stopped writing."

Her first novel, Appaloosy, is a story told from the point of view of an Appaloosa stallion named Storm. Again and again, Storm is faced with difficult challenges as he must decide between freedom and friendship, and as he is stolen and given to new owners.

Mattie said her favorite genres include historical fiction and the classics. Currently, all of the books she has written have been historical fiction, but she is now working on a non-fiction book as well as a fantasy novel.

Her favorite authors are Mark Twain and Louis L'Amour.

"But I also look up to J.K. Rowling," Mattie said. "She's a woman author who has really made progress in the world of writing, and I guess kind of a role model for me."

Mattie said the inspiration for her writing comes from many sources, including overheard conversations, everyday events, songs, television, and films.

"My inspiration really grows into something when I go out and ride a horse, all alone, because it is quiet and it gives me time to think without interruption in the beautiful landscape of rural North Dakota," she said.

Mattie was inspired to write Appaloosy when she first moved out to the North Dakota.

"I hadn't made any friends yet and I really wanted a horse," Mattie explained. "Since I couldn't get one at the time, I decided to write a story about one instead. Having it from the point of view of a horse is a feature that adds a lot to the story and, as far as I know, is a fairly original point of view."

She also wanted to be able to talk about historical events, and realized that horses were integral in many battles, and would see those events without bias.

When it comes to actually writing out her stories, Mattie follows a process that involves a lot of brainstorming before putting pen to paper.

"I usually start out with an idea, sparked from real life, and move it around in my head," Mattie said. "During the day while I'm in classes, at work, etc., I will start to develop that idea and/or character and begin to make it into a story."

Once Mattie has developed those elements, she fleshes out the story's main characters, writes out a few details about the minor characters, and tries out the plot.

"If that works, I begin writing, which is the most lengthly, but most fun, process," she said.

When Mattie started writing, she could write for 8 hours each day, allowing her to finish her writing more quickly.

"Now that I'm in college with a heavy course load and have a part-time job, I find it hard to sneak in half an hour here, 20 minutes there," she said. "But there are still nights that I will stay up for hours and write."

Since Mattie writes historical fiction, her work also involves a lot of extensive research. Because of this process, it takes Mattie anywhere from 2 months to 3 years to complete each novel!

"One of my favorite parts about being a writer is simply writing," Mattie said. "It is my craft, I'm good at it, and it's a lot of fun. There's nothing better for me than to be able to sit and work, uninterrupted, for hours."

Even better, she gets to meet people that have been touched by her writing.

"A great part about writing is the people that I get to talk to, especially the kids, as my horse books are geared mainly toward children and tweens/teens," Mattie said. "There's nothing better than having someone tell you, 'I just couldn't put your book down until I finished it!' or 'My kids loved your books.'"

But writing can also be difficult for Mattie, especially with an extremely busy schedule that doesn't afford her much time for her writing.

"Between college courses, homework, and my campus-job, as well as packaging and sending books, writing letters back to the people who do write me, scheduling interviews, trying to fit speaking to public schools between my schedule, and delivering books to stores to be sold, it's hard to find time to actually write," Mattie said.

Still, she tries to write as often as possible, even if the writing doesn't always come easily.

"One of the hardest parts could be the bouts of 'writer's block' which still occur quite frequently for me, even though I have four books published," she admitted.

Mattie is incredibly passionate about writing, and believes that others can accomplish what she has.

"You can accomplish almost anything, if you put your mind to it," Mattie said. "Since I am so young, I serve as a kind of living example, and that is one of my main goals of writing, not to become famous or rich, but to inspire others to write, or just to follow their dreams, even if it doesn't involve writing."

She also encourages other writers to look to history for inspiration.

"People (and horses!) back then had stories too," she explained.

It's also important to stick with writing, despite any obstacles the writer may face.

"Never. Give. Up," Mattie said. "I would have never imagined that I would be talking to hundreds of kids, asked to do print and radio interviews, or selling hundreds of copies of books if you would have asked me when I got my first batch of Appaloosy published four years ago."

She said that she could have never gotten to this point if she had given up on her writing.

"Even if you don't have time to write, make the time," she said. "You never know where you can go with it."

Mattie is currently trying her hand at the fantasy genre, a fourth novel about horses that takes place during the civil war, and a coming-of-age novel called The Bass Player's Never Famous.

"I have so many ideas in my head; I don't think I could ever run out," she said.

She also believes it's important to remain realistic, and have a back-up plan that will allow her to keep writing.

"I won't be able to make a living on my writing alone, so I am currently working toward my B.A. in English Education, so that I will be able to teach English at the high school level and keep my writing on the side," Mattie said.

Mattie's most recent teen novel is called Blackberry Blossom, about a sixteen-year-old girl living in America during the Great Depression.

"She runs away from a hard home life, taking her fiddle with her, in order to play sometimes in exchange for money but more often for food or a place to stay," she said.

During her journey, she meets a boy about her age named Pepper, who is a guitarist.

"The two decide to become partners and the book follows their adventures throughout America, where they play in cafes and theaters as well as Hoovervilles and shantytowns," Mattie explained. "The two always inspire to do something great, but there might be something even bigger for them than they ever could have imagined."

Mattie also had girl power in mind when she was writing the book.

"I desired to make Molly a very strong character, because girls need to know that they can do anything if they set their minds to it," she said. "Indeed, when we think of the Great Depression we don't tend to think too much of young women, but I wanted to highlight the time through the eyes of a young girl."

Mattie said that Blackberry Blossom was her favorite book to write. It has also been one of her best-selling novels so far.

"I'm glad that people have had such a great reaction to it," she said.

Her books, Appaloosy, Dusty's Trail, Golden Sunrise, and Blackberry Blossom, are all available to purchase on Amazon.

"I'm working on getting my books into bigger bookstores like Barnes & Noble," she said, "but it is a long process and so they may be there sometime in the future."

Do you love to write? Share some of your ideas and get great feedback from other aspiring authors at Sweety High!