Maya Ganesan is a 15-year-old poet from Washington who started writing poems in preschool and hasn't stopped since. 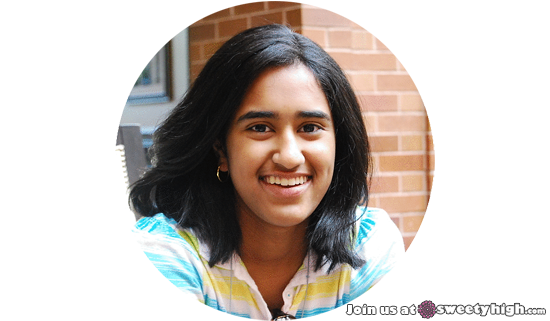 She published her first collection of poetry, Apologies to an Apple, when she was just 11, and has since has her work featured in a number of anthologies and journals.

We spoke with Maya Ganesan recently about how she got started and about the little things in life that inspire us all.

"My earliest memory of poetry is sitting on the floor in preschool, listening to my teacher reading Aileen Fisher poems," Maya said.

Not long afterward, while sitting in the living room as her mother prepared lunch, Maya Ganesan wrote her first poem. She was 4 years old.

"I had a black diary that I vowed to use to write all my poems," she said. "I was fully prepared to be a 'real poet.' I sat down and just did it. It's a really silly poem, actually, and I've no idea where the inspiration for that came from."

She was a quiet, but thoughtful and curious girl, who spent more time soaking in the environment around her than she did talking. She had a lot to say, even if it wasn't out loud.

"I don't know if I had a natural gift for poetry, or if I just spent a lot of time observing the world around me," Maya said. "I just transferred that onto paper. My first poems weren't particularly well-written!"

Like many others before her, Maya fell in love with reading after being introduced to the Harry Potter series.

"It may sound cliché, but I just love J.K. Rowling," she said. "Although she's absurdly famous, she has remained refreshingly introverted, private, and humble, and I love that she still writes despite the fact that she could quit and live a very financially stable life. Not to mention the fact that she's a brilliant writer! Maybe this is my Anglophilia talking, but I've listened to so many of her interviews, and to me she is unfailingly interesting, self-effacing, and immensely relatable."

As a poet, Maya reads every kind of poetry she can get her hands on.

"I think it's important to read all kinds of poetry and take in the full spectrum and let it shape you in all kinds of ways, so I tend to go for breadth rather than depth," Maya said.

Maya has also co-organized TEDxRedmond, an independently-organized event in Redmond, Washington styled after TED conferences, for four years. She gave a talk about her poetry during the first year of the event.

"I'd never done any public speaking before — certainly not to crowds of 700! — and it was an exhilarating experience that just made me want to do it again," Maya said. "Even though I'm a real introvert, I absolutely love public speaking. Such a joy!"

As she's grown older, Maya has sought inspiration from a number of sources.

"I love talking about inspiration, because I don't think one can ever have enough of it," Maya said.

She explained that when she first wrote poetry, she drew less on emotional inspiration than nature, such as trees, birds, and beaches.

Maya said she doesn't have just one process she uses to write her poems, but she usually starts with a blank page in front of her.

"If I haven't decided (or don't know) what to write about, I'll start making a list of the first twenty or thirty words that come to mind, and start connecting them in phrases until I hit upon something evocative that gets me thinking," Maya explained. "Once I know what I want to say, sometimes I'll get it all out in one shot and then go back and edit, but usually I edit as I go, turning over phrases in my head and tweaking them to make sure they encapsulate just what I want them to."

But Maya stresses that her method of writing poetry isn't necessarily the way everyone should  try to write.

"It works very differently for different people, so you should play around with process at first to establish what works best for you," she said.

Mostly, Maya owes her poetic sensibilities to her observational nature.

"The biggest thing that has helped me as a poet is just watching the world," she said. "I do a lot of people-watching, and a lot of window-watching!"

Maya doesn't have a smartphone, and opts to keep her iPod at home. Instead, she studies people to keep herself busy.

"It's such a great way of understanding people and the world around you, and it's helped me enormously in terms of inspiration for poems," Maya said.

Currently, Maya is working on a new book of poetry.

"It's been a slow process over the past couple of years, because I think my sensibilities as a poet are changing as I go through my teenage years," she said. "But ultimately, as I think is the case with most artists, I just want to share my work with as many people as possible."

Even though Maya describes herself as an "open book," there are a few things about her that few people know!