Maya Tuttle: What Girl Power Means To Me!

To me, "girl power" is about being brave enough to be yourself. For me, a big step toward that is getting used to pursuing my interests despite being afraid. 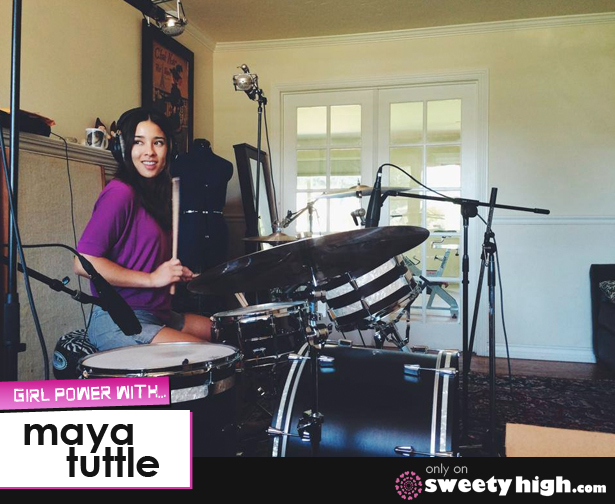 The first time I performed onstage, I was terrified. Lightheaded and trembling, my palms were so sweaty that the drumsticks were sliding out of my hands. My voice, which I was so confident about just hours before in the privacy of my room, now shriveled to a weak, shaky, out-of-tune version of itself.

My mind was also betraying me: it was as if my instincts were telling me I was going into an extremely dangerous situation and that the smart action would be to abort: "you're not good enough to be performing in front of people yet," "you're going to embarrass yourself permanently," "your life will be ruined if you continue!" – all of this was running through my head just as I was about to walk onstage.

I was afraid, but I knew that there were only two ways to rid myself of this fear: 1) to not do it (which would likely mean I'd never do it), or; 2) to do it.

So I did it. I played through the fear. Thirty minutes later, our show was done and, like magic, the fear was gone. It was not a disaster. Granted, it wasn't a stunningly amazing performance either, but it certainly wasn't the catastrophic mistake my mind would have led me to believe prior to walking up onstage. But the part that was stunningly amazing was the confidence boost that came: I did something I was afraid to do, and that proved to me that I could do it again if I wanted to.

I also realized, in the years of performing since then, that the nervous feeling never really goes away, but it does stop having as much control over you. The more you do a scary thing, the less scary it gets. So it's necessary to be able to act despite the fact that you're afraid. That's what they say the definition of "bravery" is, right?

"Bravery is being afraid but doing it anyway." And, honestly, I hope the fear never completely goes away. I think the presence of fear means that you care about what you're doing, and that authenticity should always be there no matter what you decide to pursue. It's actually a good sign. So, I say embrace it all, "be afraid AND be brave" – and you will create a life that you love.

Maya Tuttle is the drummer, and the sole female member, in the O.C. rock band The Colourist. You can follow her on Twitter here!