If your morning starts with a sugary dose of caffeine from McDonald's, you'll be happy to learn that McCafé just got a little bit sweeter.

On Mar. 21, McDonald's announced that they are adding three new treats to their McCafé menu. This time, the new coffees are a nod to one of our favorite chocolate goodies—turtles. 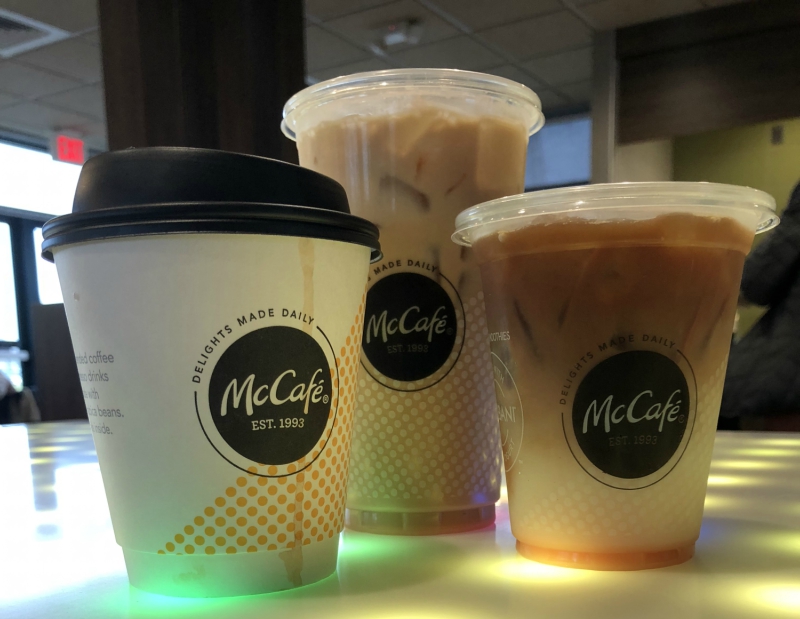 If you've never had a turtle, you're missing out. These sweet candies are a mix of gooey caramel and delicious pecans, all wrapped up in a perfect milk chocolate casing. Considering I'm absolutely obsessed with these desserts, I had to give McCafé's new Turtle beverages a try.

Scroll below to see what I really thought of these new drinks.

The first drink up for a taste test was the Iced Turtle Macchiato. This drink is advertised as a rich mix of caramel and hazelnut flavors with a swirl of chocolate running throughout. Add in creamy milk, espresso, a chocolate drizzle and a scoop of ice and the drink is done!

When I first received my Iced Turtle Macchiato, I was quite impressed with the appearance. There was a definite separation between the espresso and the milk, with a nice glob of caramel sitting on the bottom. However, unlike the advertised picture, mine didn't have clear swirls of chocolate running through the drink. 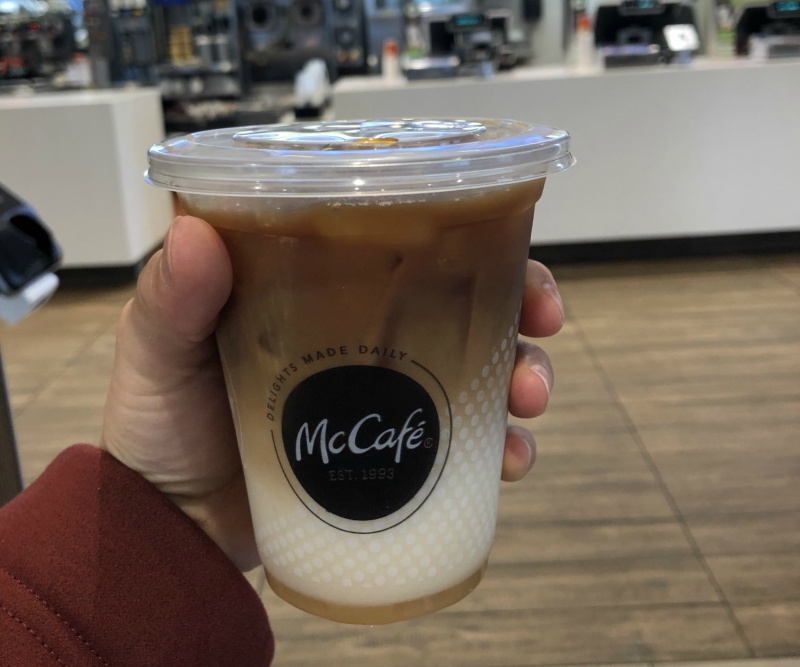 After admiring the appearance of the drink, I was ready for a taste. I'd read somewhere once that the whole point of drinking a macchiato is to get a strong coffee flavor at the beginning and have it slowly sweeten as you get to the milk section, and that mixing macchiatos is a big no-no in the coffee world.  I've let the coffee snobs get into my head, so I decided to give the drink a first try without mixing, and then mixing it later.

Since drinking from a straw pulls from the bottom of the drink first, my initial taste was a huge hit of caramel from that pool at the bottom. I love caramel so I really didn't mind, but I don't think sucking down the caramel first was the point of the drink. After mixing it up, the flavor of the espresso was surprisingly strong for a McCafé drink. I opted to get the iced macchiato with nonfat milk, so that probably played a role in a more robust coffee flavor.

The hazelnut really stood out in this drink, definitely taking center stage alongside the espresso. More subtly, I could taste the caramel lingering in the background, adding a nice note of sweetness that paired really well with the other flavors. The only flavor I couldn't seem to find was the chocolate, but the caramel and the hazelnut were strong enough that I didn't mind.

All in all, it was a pleasant drink experience. I would definitely order the Iced Turtle Macchiato again.

In my first sip before mixing the drink, I got quite a strong dose of espresso. Since this hot drink is more of a traditional macchiato with the espresso sitting on the top, I wasn't surprised at the bitter flavor. Still, I could taste the caramel lingering under the surface, so the hit of espresso wasn't at all unpleasant. 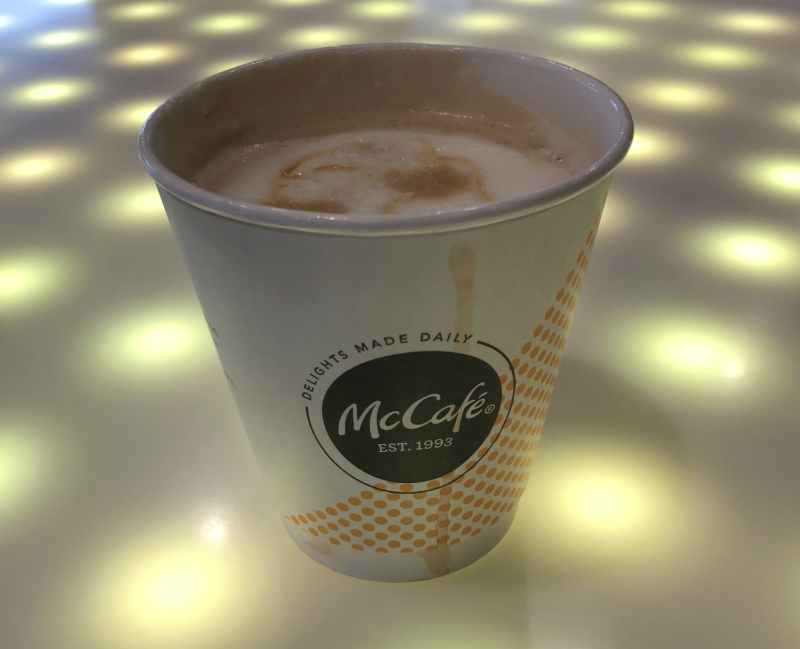 After mixing the drink, I took a second sip. This time it was much sweeter and had a beautiful balance of flavors. Unlike the Iced Turtle Macchiato, where the hazelnut was the primary flavor, the caramel and hazelnut were blended much more evenly here. It was definitely sweeter than the iced version, but I attribute that mostly to the use of whole milk instead of nonfat milk. It also wasn't unpleasantly sweet. It reminded me of a cup of hot chocolate, and I found myself wanting to snuggle up in a blanket and relax.

However, I still didn't taste the chocolate. I could smell it somewhere in the drink, but it was definitely drowned out by the other delicious flavors at play. Considering I really enjoyed the taste of the drink, I didn't really mind the absence of chocolate too much.

Last, but not least, was the Iced Turtle Coffee. This drink is different from its other Turtle companions in that it combines iced coffee with chocolate, caramel and hazelnuts and finishes it off with a dose of cream. It boasts the same flavors, but it's made in a slightly different way and only comes in a larger size.

Appearance-wise, the Iced Turtle Coffee looks like a pretty average iced coffee. Again, it was missing the swirls of chocolate that are boasted about in the ads, which finally had me wondering if they forgot to add chocolate to my drinks altogether. If they only added a drizzle rather than the large swirls, it would definitely explain why I couldn't seem to find the chocolate flavor.

Either way, I powered on. Taking a sip of the Iced Turtle Coffee, the only thing I could really taste was the sweetness. There wasn't the same separation of flavors that I found in the other two drinks. In fact, it mostly tasted like whipped cream, which is probably because of the added cream that the other two drinks didn't have. After taking a few more sips, I start to taste the hazelnut and could detect a very minor taste of caramel, but they were both overpowered by the creamy flavor. 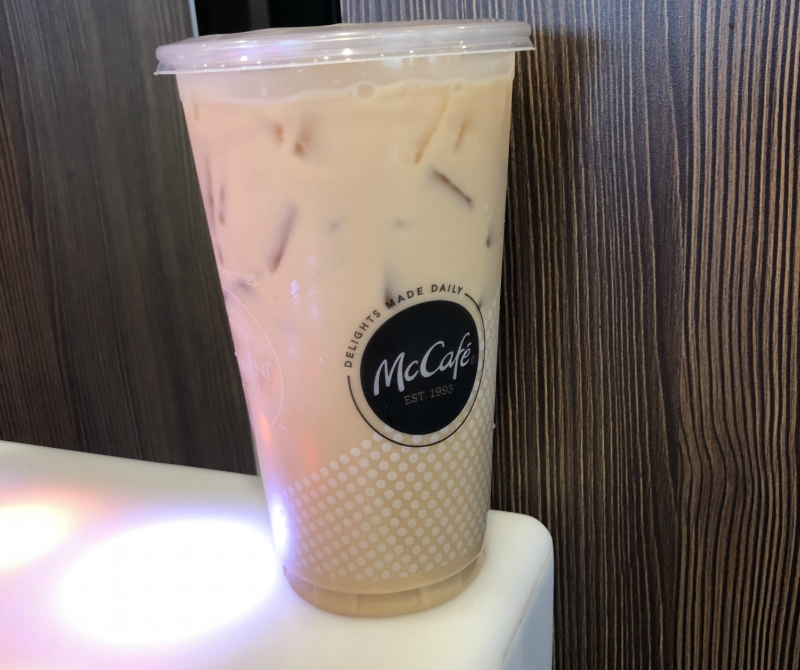 I have to admit the Iced Turtle Coffee wasn't my favorite. It didn't really taste like coffee, and I could hardly find those signature turtle flavors. However, I'm not much for sweet drinks and I love the taste of coffee. Since I prefer a nice dose of espresso over other creamy flavors, I wasn't surprised that I didn't prefer this drink, so take my opinion with a grain of salt.

Overall, I really enjoyed the new Turtle beverages. The Iced Turtle Macchiato and Turtle Macchiato were a pleasant addition of sugar to my day, and they had enough coffee to give me a small energy boost that powered me through the rest of my work. While I personally would steer clear of the Iced Turtle Coffee in the future, its creamy taste and texture are definitely suited to anyone who likes a bit more sweetness in their beverages. Whatever drink you might get, I definitely give McCafé a 10 out of 10 for creativity. The new drinks officially launch nationwide in April, so be sure to grab one and try it out for yourself.

We're all about trying new drinks, so click HERE to see exactly what we thought of McDonald's Iced Caramel Macchiato.