Megan Grassell is the 18-year-old creator behind Yellowberry, a company that creates fun, colorful and unique bras that are age-appropriate for tweens! 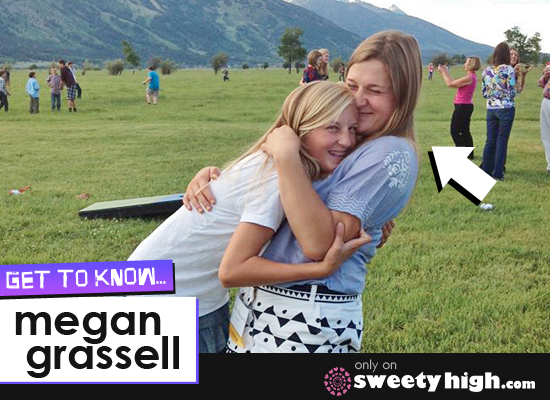 We recently spoke with the young entrepreneur to discuss the inspiration behind the company and why the cause was so important to her!

Megan Grassell was 17 when she went on a fateful shopping trip with her mother and then-13-year-old sister, Mary Margaret.

"We scoured the mall to find a bra that would fit her, that was cute and fun and that she could be excited to buy," Megan explained. "There wasn't anything there, and I was really appalled at the options that she had."

Megan and her sister found that the options available would have been suitable for a grown woman, but not a young teen.

"She came out of the dressing room, and I said, 'Mary Margaret, you can't wear that,'" Megan said. "Leopard print push-up is not what I want to see my little baby sister wearing. And more than that, nothing fit her body."

Going into these stores, Megan's impression was that the tween years are a forgotten age to undergarment manufacturers.

"In a way it was forced upon my sister," Megan said. "I felt like that when i was buying my first bras, too. It was either a sports bra or a bra with a cup, but it doesn't have to be that way, even if that's the way it's always been."

Megan realized she was on the lookout for something that didn't seem to exist. She decided that if no one else was going to make an age-appropriate bra for tweens and young teens, she was going to. In March of 2013, she developed the first ideas that would become the Yellowberry company.

"I think we all have cool ideas from time to time, but they kind of come in and go out," Megan said. "But this time, I just couldn't stop thinking about it."

Megan had no knowledge of the apparel industry, but did everything she could to get her business off the ground. She made phone calls to people she had found on Google, and stopped entrepreneurs and businesspeople in local coffee shops for advice.

"I took advantage of the fact I was 17," Megan said. "I was a bit naive and unknowing. I thought, 'People will help me, I'm young!' and then just made it happen."

In fact, Megan said that her naivety was an asset in the earlier stages of Yellowberry.

"I didn't think about what people were going to think about me," she said. "I just knew what I wanted to happen, and I was going to make it happen."

It was good that Megan didn't worry about what people thought, because early on, there were a number of adults who did not take Megan's efforts seriously. She never let it get her down.

"I felt it was never really discouraging," she explained. "But it made me really angry that no one would take me seriously just because I was younger than they were. I'm a very stubborn person, so I did it to prove them all wrong. I was going to make this happen, and now they're not laughing anymore."

She began the company using her own personal savings to fund purchases for sample fabrics and building prototypes.

"At the time it seemed expensive, but it really was nothing compared with what needed to happen," Megan said. "My parents didn't really have the means to support Yellowberry beyond that, so I looked into crowdfunding platforms, especially because I didn't want to give away any percentage of my company."

Megan decided to start a crowdfunding campaign on Kickstarter. Megan filmed a video explaining the company with the help of an editor and shared it when the campaign went live.

However, once the crowdfunding began, Megan worried if she had done enough to prepare.

"I was really scared and kind of embarrassed for the first couple of days because it gained so little traffic," Megan said. "I really felt like I didn't know what I was doing."

But Megan persevered. She emailed an introduction to her story and a link to the campaign to some people she thought would be interested, including blogs about tween fashion and girl empowerment.

These emails made a big difference. Among the people who responded and picked up her story were the girl empowerment site A Mighty Girl and the engineering toy company GoldieBlox. Both posts generated huge interest in what Yellowberry had to offer.

"Within a span of 24 hours, the campaign went from $2000 funded to being completely funded for $25,000 from people that I didn't even know," Megan said. "That was incredibly cool."

The name "Yellowberry" was inspired by the developing stages of a fruit.

"If you look at a fruit or berry before you pick it, it goes through a lot of changes" Megan explained. "It goes through a lot of different shades of yellow, and you can't rush those stages or alter them in any way. It just happens naturally and over time. It's a lot like a girl's tween years, where you're growing up from a child into a woman and becoming who you are."

Like the development of a fruit or berry, a young girl shouldn't be rushed to mature.

"You can't rush those stages," she said. "They happen, and they're awkward and embarrassing, but you just have to own it."

Megan said that Yellowberry is so much more about the product itself.

"It's a simple representation for a social movement," she said. "Girls don't have to grow up so quickly, and they don't have to feel pressured to look a certain way or dress a certain way. It's ok to just be exactly who you are."

Megan has been accepted to Middlebury college, but plans to defer for a year to focus on her business.

"Yellowberry is my main focus in life right now, and I really think there's a future with it," she said. "I plan on running Yellowberry and I'll do whatever I need to in order to make that happen."

For updates on Yellowberry and Megan Grassell, be sure to check out Yellowberry's social media pages below. You can also join us at SweetyHigh.com to tell us about your favorite young female entrepreneurs!