Megan Nicole Talks "Never Have I Ever"!

Singer-songwriter Megan Nicole is an internet sensation, and her new single, "Never Have I Ever" is destined to be another summer hit! 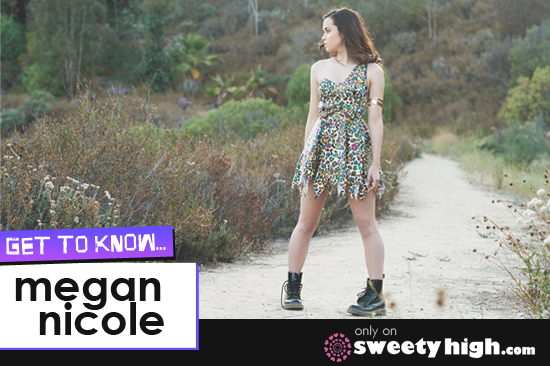 We recently spoke with the rising artist all about the new track and its music video, which released yesterday, plus upcoming music and more!

Megan said that the first verse of "Never Have I Ever," which details nights at home, alone, watching reruns and eating Chinese takeout, is a totally accurate description of her personality.

"I'm naturally a chill person," Megan said. "Typically on a Friday night if I'm not working or hanging with a small group of friends, I'm in my apartment watching Netflix and hanging out with my dog."

But as time has gone on, Megan has tried to break out of her comfort zone.

"I've grown so much as a person and continually push myself to dream bigger and try new things," she said. "'Never Have I Ever' is about taking those risks. More specifically it's about connecting with that person who you immediately feel comfortable being yourself around. They make you feel like you can do anything and not afraid to take on the world."

Her lyric video for the track, which released mid-June, is cute and playful, featuring tiny plastic dinosaurs in stop-motion!

"I'm always looking to try things a little out of the box," Megan explained. "I loved the idea of doing stop-motion and the dinosaurs tied in perfectly with the theme of my music video! I still laugh watching the little dinosaurs dance about and wish we had more time to make it."

The video was created in just four hours, which is not very much time at all when it comes to stop-motion!

"That process is done by taking a picture at a time," she said. "They'd move the dinos a little each time then put the pictures together when editing to give it the movement."

The official music video for the song released yesterday! In the new music video, Megan plays a cavewoman who stumbles upon a time machine, transporting herself and two caveman pals to the present!

"The music video is pure craziness! I love it," Megan said. "I had the idea of doing cavemen a while back and ended up using the concept for this video."

Megan's original idea for "Never Have I Ever" followed the lyrics quite literally, but after pondering it over, she didn't want the video to be expected or obvious. The cavemen narrative ended up being a perfect fit.

"It kind of works perfectly because these cave people are transported into modern time and are experiencing so many new things for the first time, including karaoke, and dancing on the tables," Megan said. "It was so fun getting to play such a wild character."

Megan was also thrilled with her performance shots. The location looks positively prehistoric, and her dress is fabulous, too.

"I'm kind of obsessed with my custom colorful cave dress, actually," she said. "I may wear that one a few times more."

On top of releasing her awesome new single, Megan Nicole has also been extremely busy this summer playing shows for Macy's, Radio Disney and more!

"I was in a different state every Saturday!" she said. "It was so fun getting the chance to go to these places in the states that I haven't been to yet. I always love the opportunity to perform and meet the lovely people who support me and my music. Some of those shows in the south were hot, but I still had a blast rocking out in that crazy humidity with everyone."

She's also currently working on an EP, which is slated to release later this year!

"It's different from anything I've done before, but so me," Megan explained. "I spent a lot of time this last year going to the mountains where there was no cell service or wi-fi and just created and wrote in this little studio."

The EP is particularly special because it'll be Megan Nicole's first!

"It's the first album I'm ever giving my fans and some of them have waited since the beginning of this journey (which has been years now!)" she said. "Each song has a unique message and there are so many more live instrument elements to these songs. I can't wait to share it with everyone."

She said she is particularly excited for her fans to hear the new music because they're the reason she's made it so far.

"Thanks for all the support over the years!" Megan said. "Anyone who has ever shared a video, bought a song, or come out to a show, thank you for making it possible for me to do what I do. I can't wait to share all that I've been working with ya'll!"

Follow Megan Nicole on her social channels and check out the music video for "Never Have I Ever" below! You can also join us at SweetyHigh.com to share all things Megan Nicole!