Megan Yurko is a 16-year-old from Wheeling, West Virginia, who has made a big name for herself in the world of barrel racing. 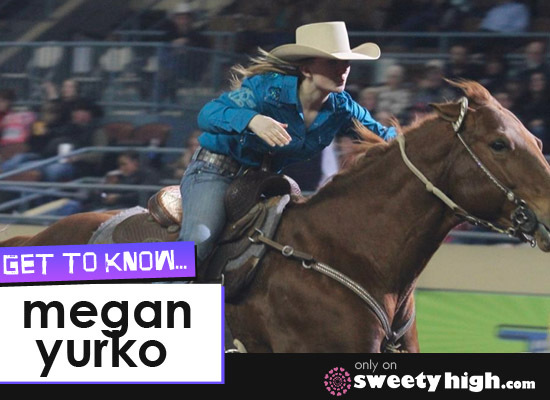 The young cowgirl spoke with us all about her history with horses and what it was like to win the 2013 International Professional Rodeo Association world title in barrel racing in a recent interview!

Megan Yurko first got interested in barrel racing around the age of 9. She had been practicing English riding and jumping ponies since the age of 6, and was looking for a change.

"[I] got bored going slow so I started racing barrels and loved it!" Megan explained. "I've been hooked ever since!"

Megan explained that barrel racing is a spectator sport with several different events.

"Barrel racers like myself race into the arena turning three barrels in a triangle pattern as fast as possible," Megan said.

The racer that completes the barrel race the fastest wins the biggest cash prize. Rankings are determined by money earned during the races.

Megan owes most of her success to her horse, Beea. Her parents purchased Beea for her in the spring of 2009, when Megan was 11, and Beea was about to turn 5.

"I have ridden several horses and she is my once-in-a-lifetime partner," Megan said. "She is gentle and kindhearted and we hit it off from day one!"

Megan and Beea won several barrel racing jackpots in their first summer together.

"In the fall we entered the All American Quarter Horse Congress and came home champions of 2 classes, with Beea making me the youngest ever to win the Junior Horse class," Megan said.

Megan said that her time with Beea has been unlike any other experience in her life.

"The feeling I feel when I get on the back of a horse is pure adrenaline and love," Megan said. "Knowing you have an 1100 lb. animal that you trust completely thundering down the alley at full speed, feeling their heartbeat and yours, hearing the roar of the crowd, the music, the announcer, is an indescribable feeling."

But Megan's life isn't all rodeos. Megan has to balance her school curriculum with barrel racing. She also used to participate on the school swim team, but decided not to this year to focus on her grades as well as winning the world title.

"Balancing school and rodeo is very difficult," she said. "I have lots of help and would not be able to balance it all without the help of my family, tutor and sponsors."

On a normal school day, Megan wakes up at 4:30 in the morning.

"I get ready, leave for the barn to feed the horses, then school," Megan said, "then meet with my tutor, then back to the barn to ride, then back home to study."

Megan misses a lot of Fridays at school due to her competitive barrel racing.

She often leaves town Thursday immediately after school for a weekend of driving up to 1200 miles with her horse, Beea, in tow, and attending three or four rodeos before returning home in time to make it to school on Monday morning.

Despite all of the hard work and restless nights, Megan loves her life as a cowgirl.

"We are a different breed," she explained. "We are a family that believe in God and country, hard work, don't mind being dirty, living on the road with our horses, sometimes having no money and still pushing on to the next rodeo. We really are a bunch of gypsies and it's an amazing life!"

In January, Megan and Beea participated in the International Professional Rodeo Association's finals in Oklahoma City. She described the event as "both amazing and stressful."

Megan came into the finals with a huge lead, and worked to stay at the top in the following rounds.

"It all came down to the fourth and final round and I was the last to run, so I knew what I was going to have to do to win the world, it was crazy!" Megan said. "It came down to me just going in and having fun."

Even though Megan didn't place in the fourth round, she still had maintained the highest rank.

"It didn't matter if I knocked a barrel or placed, I had just won the 2013 IPRA world title," Megan said. "I honestly still can't believe it!"

Despite all of it, Megan's advice to others is simple. It begins with just having faith and never giving up.

"I don't believe you have to be better than anyone else," Megan said. "It's about you. You have to believe in yourself, and your horse. You're your own obstacle."

We hope that Megan has even more success in the rodeo in the future! If you love horses and the rodeo, be sure to join our community at Sweety High to share your own story with us!