Meghan Shea is a 19-year-old student in civil and environmental engineering who has wowed the science community with her invention of a low-cost, eco-friendly water filter utilizing Moringa seeds. 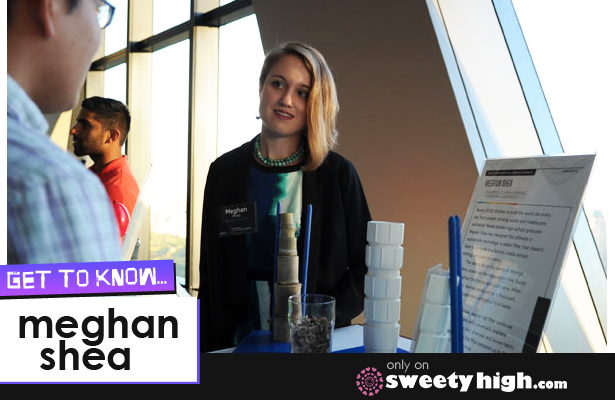 In a recent interview, Meghan told us why she's so passionate about science and gave us the low-down on what makes Moringa so special!

Meghan Shea knew early on that she wanted to be a scientist.

"I've been passionate about science since my 6-year-old declaration that I wanted to be a marine biologist specializing in seahorses," she said. "But even before that proclamation, I was always curious about the world around me and full of questions."

Today, Meghan hasn't fulfilled her childhood prophecy as a seahorse specialist, but her passions did point her in the right direction.

"While my scientific interests have certainly broadened and changed since my early childhood, I have retained a passion for exploring and understanding my environment," she said.

As a budding scientist, Meghan's interests drew her to seek solutions to some of the problems that people all around the world face. One resource that many people lack globally is access to clean drinking water.

"Water-related diseases are one of the leading causes of death around the world, particularly in developing countries, making access to clean water a crucial milestone for improving quality of life," she explained. "By the numbers, over 2.5 times more people lack water than live in the United States, a fact that can be easy to forget when you are able to constantly turn a faucet and access clean water."

In high school, Meghan was heavily involved in bioremediation research, in which she researched bacterial degradation of oil and ways to increase the rate of degradation for use in cleaning up oil spills.

"While oil spills like Deepwater Horizon can be devastating to the environment and the livelihoods of those who depend on that environment, they have a less widespread impact on human health," she said. "I realized that I wanted to be involved in research that could more directly benefit people's quality of life, which led to my shift from bioremediation work to water filtration work."

The summer before Meghan's senior year of high school, she participated in the Clark Scholars program. Each of the high school students in the program was paired with a mentor from Texas Tech University to complete an intense summer-long research session.

"My mentor, Dr. Michael San Francisco, had an interest in water filtration, and given my interest in environmental research, suggested that I work on designing a water filter for the summer," she said. "As a budding researcher, I headed straight to scientific journals, but quickly became overwhelmed by the research already being done in the water sector."

Many of the proposed water filtration systems were quite complex.

"The recent work focused on nanotechnology and highly-engineering devices – areas that seemed out of reach for a lone high schooler working on her own in a laboratory for only seven weeks," she said. "Plus, the economic and distribution constraints of more high-tech devices make them impractical for the people who need clean water the most: those living in developing countries."

It was this search that gave Meghan the bump she needed into the right direction.

"I stumbled on a website advocating the many properties of 'magic Moringa,' and the rest is history!" she said.

Meghan was intrigued, and decided to conduct some research.

"I headed back to the scientific journals," she said. "I realized that Moringa oleifera had been researched quite extensively in the late 90s as a natural alternative to chemical coagulants like alum, which had just been found to have negative health effects."

But for some reason, there wasn't much recent research available on Moringa plants. Meghan saw this as a signal to conduct some research of her own.

"I decided to order some seeds and see if I could find a way to make them easier to use," she said.

People had already developed a successful water filtration procedure using Moringa oleifera that was simple enough to be used at home, but there were problems.

"The procedure was counterintuitive in that it required users to mix seed powder with clean water in order to create a solution that would be added to dirty water to purify it," she explained. "Plus, the procedure involved a lot of stirring and waiting. It was a ton of work!"

She said that these difficulties had probably prevented the seeds from being more widely adopted for water filtration in the past. Meghan quickly set out to create a new method that wouldn't require so much work.

"I originally wanted to just shorten the procedure that had already been developed for using the seeds," she explained.

For example, the original procedure asked users to remove the seed coat from the Moringa seeds. Moringa seeds remove contaminants through coagulation driven by protein. Through protein analysis, Meghan discovered that the step was redundant.

The next phase involved a multi-step purification of the seeds. Meghan's testing proved that this step was also not essential.

But even with all of these omissions to the original process, it remained lengthy.

"Just removing these initial steps still left a lot of stirring and waiting for the user," she said.

"I decided that the seeds might be easier to use if they were included in a larger filtration device, so that the stirring and waiting could be done within the filter instead of by hand," she said.

Meghan set out to make this bigger filter completely from household items.

"My goal was that anyone, anywhere could use what they had lying around to build a way to clean their water," she said.

Meghan gathered scrap PVP piping left over from a filter created by a previous student working in her mentor's laboratory. The result was a filter with four different segments.

"However, the beauty of the filter is that it can be made of any interlocking segments – bamboo, little clay pots, old plastic water bottles – the possibilities are endless," she said. "Many simple homemade water filters use combinations of soil, charcoal, and/or fabric; since all three are typically readily available, I decided to use all three, plus the Moringa seeds."

First, the water passes through the part of the filter containing the crushed Moringa seeds. This releases the coagulating protein that sets the process in motion.

"Then, it passes through segments containing soil and charcoal; this agitates the water and allows the contaminants to clump together, taking the place of stirring," she said. "Finally, the water passes through fabric, which filters out these large clumps."

Fabric wouldn't usually remove small contaminants, such as bacteria, that can make people sick. However, Meghan hypothesized that the presence of Moringa would result in harmful contaminants clumping together so they could be effectively removed.

"I had to test the filter to see how well it removed bacteria from the water," she said. "Developing the right procedure to do this testing involved a lot of trial and error."

So far, the filter has been tested to remove E. coli, a bacterium that can cause food poisoning.

Meghan has not yet been able to test other contaminants, but studies reveal that Moringa can also be used to filter out protozoa, viruses and chemicals.

"I have certainly noticed the gender gap between the number of men and women working in the sciences, especially when I look at the gender composition of some of my math and science classes at university," she said. "However, I definitely see signs that this norm is changing."

Meghan is currently a sophomore at Stanford University. She works in an environmental engineering laboratory there where almost 90 percent of the researchers are female.

"I realize that this is unfortunately an exception rather than the norm," she said. "I like to think that outright discrimination against women in sciences is largely a thing of the past (however, there are sadly still examples of this). Instead, I think that society's gender expectations lead many girls away from the sciences."

The science, technology, engineering and math, or STEM fields have been dominated by men for a long time. Meghan said that since people see them as fields for men, women have continued to avoid science in a self-fulfilling prophecy.

"Fewer women pursue these fields, leading to fewer women role models for the next generation," she said. "I was lucky to have several female math and science teachers throughout my early education who encouraged me to pursue my passions, and I think these types of role models are the best way to encourage women to continue into STEM fields."

Though Meghan's Moringa seed water filter has been quite the success, there are still many more steps to take before it may find widespread use.

"Before I can really advocate for my filter's use, I definitely need to do more testing to determine the full extent of what it can and cannot remove from water as well as the specific logistics for using the filter," she said.

This includes specifics on how much water to use, how often to replace filter materials and more.

"While I have not yet had a chance to do these analyses, I am hoping to continue working throughout my undergraduate career," she said.

Meghan's work made her an Intel Science Talent Search finalist in 2013, and helped her to be named as one of Popular Mechanic's 10 Innovators Who Changed the World in 2013.

But Meghan doesn't believe her success can't be replicated. She urged other aspiring scientists to start by getting to work!

"I think that any student (especially girls!) who is interested in the sciences should pursue research projects as early as possible — more than any science class in school, it's the best way to see what a career in science or engineering might entail!" she said. "Plus, it's incredibly rewarding to see your thoughts and questions come to life, either through testing a hypothesis or building a device."

If you have questions about Meghan's research, let us know in the comments below and we'll put you in touch! Share your love for all things science with us at SweetyHigh.com!