Melody Williamson is a 15-year-old country artist whose songwriting abilities have recently catapulted her into the limelight. 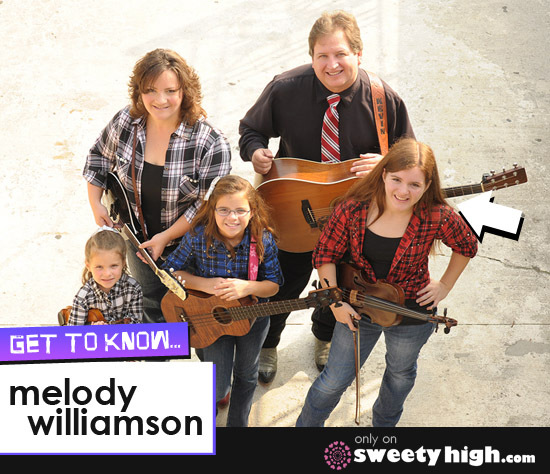 We spoke with Melody all about her start in the music industry, the track "There's No Country Here" and more in a recent interview!

Melody Williamson's grandfather on her dad's side was a musician who became involved in bluegrass music when her dad was a teenager.

"As my dad grew up he started playing guitar and bass and then when he met my mom they got married and they formed a band," Melody said.

7 years after her parents got married, they decided to start a family.

"They got off the road when I was born, and the music has definitely been a prominent part of growing up," she said.

Melody has been performing since she was two years old. Her father eventually became a children's performer and started playing at schools, libraries and churches. Melody joined in on the fun.

"I've been doing that for a long time," she said. "That's been part of my musical journey."

Now, she writes original songs of her own and plays guitar as well as the fiddle. The song "There's No Country Here," which she shared on YouTube in January, has garnered acclaim as a song about the decline of heart and soul in modern country music.

"It wasn't really a song that I set out thinking I was going to write," she explained. "As I came up with the pieces it just fell together and it really surprised me."

The track also attracted the attention of The Huffington Post, who featured an interview with Melody earlier this year.

"That was so cool," she said. "I couldn't ever guess what the extent of the response was going to be, but it was really big and I was blown away."

The site went so far as to say that Melody could give Taylor Swift a run for her money!

"Well I don't know about that," Melody laughed. "But I'd certainly like to have the opportunity to be up there with her."

One of the first songs Melody was ever inspired to write was a track called "Country Girl."

"It's about the fact that even though I don't work on a farm, I still really love to listen to my country music," she said. "I have a lot country in my heart."

Melody's songwriting started when she was 10, when she would write little rhyming lines.

"There were times when I'd get really discouraged," she said. "I thought to myself, 'I'll never be able to write songs like my dad and my grandfather.' They are really amazing songwriters."

But over time, Melody realized that working hard is crucial to building up skills. She advises aspiring songwriters not to ever give up.

"This is kind of cliche, but just keep doing it," she said. "As I kept going I realized that those are all just building blocks. They all just stacked on top of each other to get me to the point where I am now."

So what are Melody's plans for the future?

"Follow music as far as it will take me and honor God in all I do," she said.

Watch Melody's gorgeous performance of "There's No Country Here" below, and click here to buy and download the song! You can also join us at Sweety High to share your own musical story!