Miranda Fuentes is a 16-year-old surfer from Florida whose work with Surfers For Autism won her a HALO Award last year! 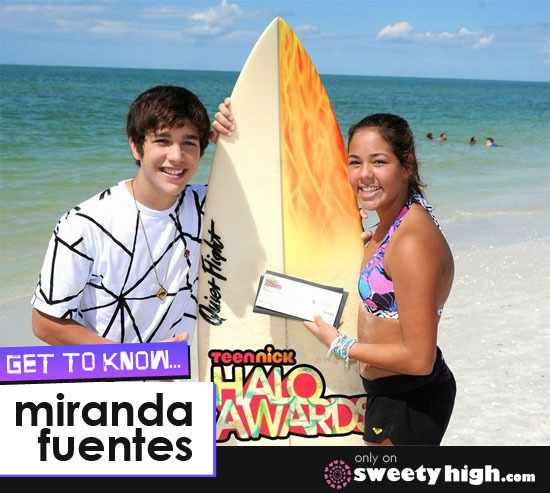 We recently spoke with Miranda about how she first got involved with the organization, and why the cause is so close to her heart!

In 2008, Miranda Fuentes' parents took her and her brother, Lucas, to a local surfing event. Lucas has autism, and the event was held specifically by Surfers for Autism for kids with autism to learn to surf and enjoy a day at the beach.

"I was ten years old at the time and having difficulties understanding what autism was, understanding my brother, and how my life was so different than everybody else's," she said.

Surfers For Autism is a non-profit that advocates for autism issues while introducing kids with developmental delays to surfing.

"The focus of Surfers For Autism is to eliminate stigma through public awareness and education and to unite communities through volunteerism," Miranda explained.

The program allows kids with autism to undertake a new experience that helps them open up and enjoy themselves.

"I believe Surfers For Autism's method is so effective due to the hydrotherapy of the ocean water and letting the participants be free and express themselves and open up to others in an inclusive and calming environment," Miranda explained.

She added that it gives participants an opportunity to impress their families with their new surfing skills.

Before the event, she had only surfed once or twice in her life.

"But as soon as I started Surfers For Autism is when I really got into surfing and the surfing lifestyle," she said.

Miranda started volunteering with Surfers For Autism at every event, rising before the sun rose to set up tents for events before taking kids out on the water to surf. Her duties often end long after the sun goes down.

Over time, she rose through the ranks to become the organization's youngest master instructor, a title she is very proud of.

"I love how I can lead a group of volunteers and teach them how to work with the participant," she said. "I love it that I can inspire other teens in giving back by helping the kids directly and also like it when the volunteers are affected positively by the impact they have."

She said that many of the people who go to Surfers For Autism events don't believe she is a master instructor at such a young age.

But according to Miranda, Surfers For Autism President Don Ryan insists that people don't let her age or size fool them.

"Being the youngest master instructor is truly and honor and privilege," she said.

Since Miranda has been involved with the organization, it has grown tremendously. In its first year, Surfers For Autism had a single event, 40 volunteers and 30 participants.

They've grown to 15 events per year, which more than 400 volunteers, 200 participants and thousands of spectators at each event.

"It blows my mind that I am part of it," she said. "Every year the events grow bigger and bigger."

In 2013, Miranda was one of four honorees at TeenNick's HALO (Helping And Leading Others) Awards for her involvement with Surfers For Autism.

"Meeting the three other honorees was definitely the best part of my experience," she said. "They were three of the most giving, honest, committed people I ever met, and they are teens!"

Miranda said she was shocked when she found out she had won a HALO Award.

"I thought Nickelodeon was filming a piece about my volunteer work with Surfer's For Autism," she explained. "They sure were very sneaky!"

The experience afforded her the chance to meet her favorite singer and celebrity crush, Austin Mahone.

"In the middle of the day at  one of the Surfer's For Autism events that Nickelodeon was filming, Austin Mahone came down the beach riding a beach cruiser," Miranda explained. "He hops off the bike and screams 'Miranda Fuentes this is your HALO hit!' I was speechless!"

Miranda said that so many emotions were swimming through her head that she couldn't say a word.

"I'm glad they have it on film for me to remember what happened!" she said. "We even got to go paddle boarding together offset and I got to teach him to surf a little."

Later, Nickelodeon flew Miranda to Los Angeles, where she had the chance to meet Shay Mitchell, one of the stars on her favorite show, Pretty Little Liars. She got to hang out with Shay on the show's sound stages to discuss acting and charity work.

"Being surprised by Nickelodeon to meet my two favorite celebrities was amazing and I am so thankful I got to meet them," she said.

Thanks to Nickelodeon, her whole family was able to come with her to California to watch Miranda accept her award.

"What an experience!" she said. "They really know how to make someone feel special. From glam teams, to dress rehearsals, to VIP parties! I felt like I was in a dream."

She met even more amazing celebs on the night of the HALO Awards.

"I got to meet Nick Cannon who is pretty stylish and funny and also got to meet Darren Criss, an actor from my 2nd favorite TV show, Glee," she said. "It was all surreal and I am never going to forget those moments."

Even with the award under her belt, Miranda plans to keep working hard at Surfers For Autism. Her goal is to someday run the organization.

"I am so passionate for this organization and I am just hoping for it to get even larger," she said. "I plan on working with Surfers For Autism until there is no more autism!"

She has also set a goal to graduate high school with great grades and go to a university to study behavioral therapy so that she can better understand and help kids with developmental disorders such as autism.

"I would like to say to other teenage girls out there that we can do anything if we set our minds to it," she said. "If you are willing to volunteer, find some organization in your hometown. The feeling of giving back your time is truly amazing."

She added that anyone, regardless of age or gender, can volunteer.

"Being out in the surf, big or small, just knowing in your heart that you can make such a difference, make someone feel confident, make someone overcome a fear, make someone smile for the first time!" she said. "So come on girls…. you can do it! Remember 'There is nothing better than the gift of your time.'"

To learn more about Surfers for Autism, check out their social pages below! Tell us about the causes you are passionate about at SweetyHigh.com!