19-year-old Morgan Baskin is a strong believer that youth matter, and that's why she's running to become mayor of Toronto! 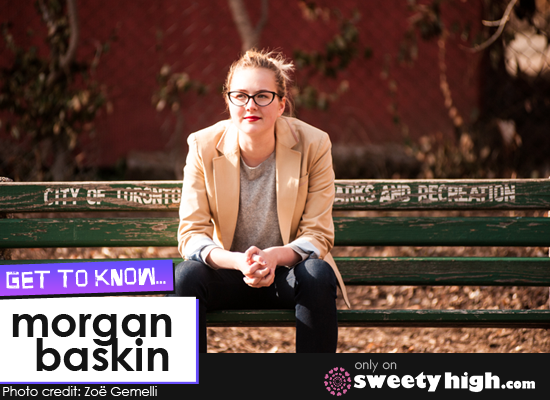 We recently spoke with the teenaged candidate for one of Canada's biggest mayoral races about why she's running, and why mobilizing youth and improving Toronto are so important to her!

Morgan's ambitions to be in charge started at a young age, though not necessarily in the form of being the mayor of Toronto.

"When I was a little kid I wanted to be the queen of everything when I grew up," Morgan explained. "I grew up in a family with strong social justice ties, so I'm definitely involved in that world, but I wasn't necessarily interested in politics. I don't think that's what any 4 year old wants to do."

Like her family, Morgan got involved with the causes that mattered to her. A couple of years ago, when Morgan was 16, someone suggested that Morgan should run for mayor of Toronto.

"I thought about it over the next two years and continued to think about it," she said.

"I have no great story to tell about how I decided that this is what I'm going to do," she explained. "I just became increasingly frustrated with the lack of inclusion of young people in politics and wanted to see change happen."

Morgan decided that she could be that change. But like many young people trying to make a difference, she has had to fight to be taken seriously by adults.

"There are a lot of people who say, 'She's just an 19 year old girl, what does she know?'" Morgan said. "Mostly, any opposition I face has very clearly not looked at any of my politics or my platform or listened to an interview. They've just read whatever article or headline and gotten stuck on my age and my gender."

Morgan said this kind of distrust is an unfortunate truth, but that she's not surprised by it.

"They're equating years on the planet with ability and experience, which are in fact different things," she said. "A lot of people have a really clear perception of what they think a young person is like, and often it's kind of a lie."

She explained that young women are often seen as rebellious, unreliable, and obsessed with boys. That's not always the case.

"It's all a lie," she said. "Young people, just like everyone else, are a really diverse group of people."

But thankfully, Morgan has also been backed by a lot of people that believe in her, regardless of her age.

"There's been an outpouring of support that I never expected, not only from young people but also from parents and grandparents, and from people who are sick of the status quo in politics," she said.  "People who do spend a lot of time paying attention to politics are interested and excited about a fresh face and someone who isn't from that world, and someone who isn't a product of the politics machine."

Megan Baskin is running on a platform that places an emphasis on youth issues among other important topics.

"I center my platform on digital, global and green, in terms of really focusing in on how we can use technology to make people's lives better," she said.

Protecting Toronto's green space and the environment is equally critical.

"These issues are incredibly important to young people," she said. "We've also done an amazing job at bringing the world to us in Toronto, but not such a great job at bringing Toronto to the world and really standing as a world-class city on that global stage."

In her bid to bring big change to Toronto, Morgan is most motivated by the peers that have supported her and thanked her for taking on such an intimidating task.

"Youth issues have been my biggest motivators," she said. "But I think that young people drink the Kool-Aid as well. People tell us we don't matter and people tell us that we're not good enough and we start to believe it ourselves. That's where some of that intimidation comes from."

But young people do matter, and they do have what it takes to make things happen.

"If you've got a dream or something you care about, go out and do it," she said.

The 2014 Toronto mayoral election takes place  on October 27, and Morgan has a lot more to do before then!

Stay updated on Morgan Baskin's campaign until then by checking out her social pages, listed below, and join us at SweetyHigh.com to share your favorite stories of incredible young women making a change!