Morgan Guess On the Fight Against Bullying!

At the tender age of 10, Morgan Guess is in charge at the Guess Anti-Bullying Foundation based out of Paducah, Kentucky. She started the foundation after being bullied herself, and continues to fight for kindness in one of the states most affected by bullying. 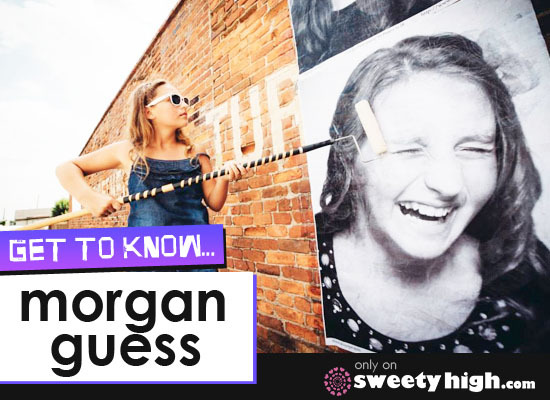 Last month, we shared an interview with Morgan about how her own experiences inspired her own anti-bullying campaign. Today, Morgan discusses a few tips on dealing with bullies.

For one, Morgan suggested that if you see that a bully is trying to publicly embarrass someone else, you shouldn't be an audience.

"They [bullies] are looking for that opportunity to humiliate someone and we shouldn't give them that support," she explained.

She also said that kids should stand up for those who are bullied, and not to be afraid to speak out. There are ways to do it without putting yourself in danger or making yourself the bully's next target.

"You can create a diversion for the kid being targeted," she suggested. "Say something like 'Mary, you have a call in the office or Mrs. Smith said you didn't turn in your paper.' You can find ways to get them out of the situation without putting yourself at risk."

She added that it's important to let the bullied person know that you care.

"Let them know that you are sorry they were bullied and that what happened to them was wrong," she said. "We need to stand up and stand united against bullying."

She added that, if you're the one being bullied, know that there are people out there who will support you.

"It is tough when you are in the middle of a bullying experience," she said. "I know. I was scared. I didn't know what to do."

Morgan was scared to tell anyone that she was being bullied. Morgan thought that her bully would begin to pick on her even more if she spoke out.

"As a result I continued to suffer in silence," she said. "Kids need to ask for help."

If those who are bullied share their feelings, Morgan said, they can become a part of the solution.

Morgan also believes that putting an end to bullying isn't about shaming bullies.

"We can always change the culture of bullying by building a culture of kindness," she said. "I ask everyone, and not just kids, to intentionally spread kindness. Look for the best in others and find a way to say something nice to everyone you meet."

In the past, general knowledge about social issues has incited change for the better.

"We can certainly change attitudes and behaviors with bullying," she said. "I believe the education and conversation around the issue the past two years in our community is lifting the veil of fear that surrounds bullying and therefore I remain committed to doing more."

In recent years, bullying seems to have become a more and more prominent problem.

"I do believe that social media magnifies bullying experience because many sites allow the person to anonymously say very mean things about another person," she said.

Sometimes, people just don't realize the very negative impact their actions and words can have on others.

"Some kids may think they are just joking or kidding around but they need to realize that it may not be funny to the person they are directing their jokes at," she said. "It can be hurtful and harmful to them."

However, the more stories people hear about the consequences of bullying, the more likely they are to look at their own attitudes and make adjustments.

Morgan's experience with bullying convinced her that something needed to be done about changing the culture of bullying.

"I was bullied and I decided I would not be defined by it," Morgan said. "I am not a victim but a change agent. The world will be better because I am in it."

Morgan is from Paducah, Kentucky. Every day, 160 thousand Kentucky students don't go to school out of fear of bullying.

"Most suffer in silence," she said. "I was one of those kids."

Morgan's mom Susan was her biggest inspiration in making a change happen.

"She discovered the bullying," Morgan explained. "She was my advocate and showed me that I could do the same for other kids. Because of her, I know I have a story to tell that will bring hope to other kids."

At first, Morgan wasn't sure that her campaign against bullying could do much to help. Over time, that sentiment has definitely changed.

"One person can make a difference and when we bring people together we can change the world," she said. "I learned that I can stand up for myself and be myself and that is part of the story I tell other young people."

She uploaded an anti-bullying video to YouTube that got thousands of views. When the local news station showed Morgan's video, other kids started contacting Morgan for advice.

"We get calls every day from families who are struggling," she said. "I know that if I help just one person than the work is worth doing and repeating."

Just by being kind to others, you can also be a part of that change.

Morgan's efforts have impacted many, and will continue to help even more bullied students in the future. The personal stories of the people Morgan has affected let her know that her efforts are worth all of the hard work.

"A girl came up to me and told me she had the courage to ask for help after hearing my story," Morgan said. "That is all of the thanks I need."

To learn even more about Morgan's work, be sure to check out the Guess Anti-Bullying Foundation's Facebook page here, and read our first interview with Morgan here!

Are you passionate about ending bullying? Click here to join Sweety High and tell us what you do to stop bullying!