On Sunday, March 9, a Muppets Most Wanted press conference was held in which the stars and creators of the film gathered to discuss the incredible upcoming film! Sweety High was there to witness the makers of the Muppets do what they do best! 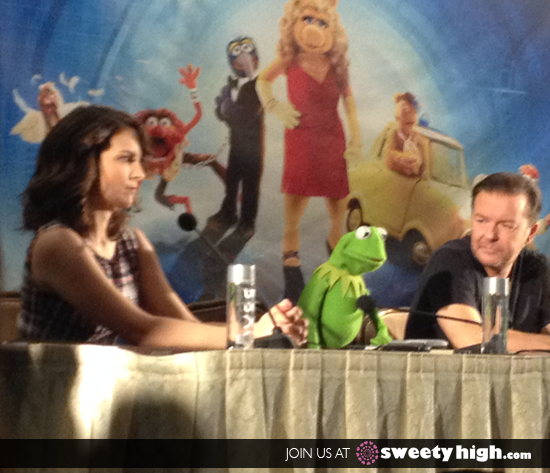 In the first segment, producer Todd Lieberman, director and writer James Bobin and original song writer and musical supervisor Bret McKenzie were on the panel to discuss the creation of Muppets Most Wanted!

Together, the filmmakers discussed the logistical challenges of filming with Muppets, writing the film's music and the number of surprising and incredible cameos nestled within the film.

Most of the film's crew had previously worked together on 2011's The Muppets, which really benefitted the new movie.

"If you know people, it's so much more fun working with them," director Bobin explained. "It's like your family back together again."

McKenzie took some time to show off his Kermit phone, with which he can always have direct contact with Kermit.

The creators of the film also discussed the importance of balancing jokes that appeal to kids and adults alike.

"I think the children of Hollywood are more influential than the parents," McKenzie added. 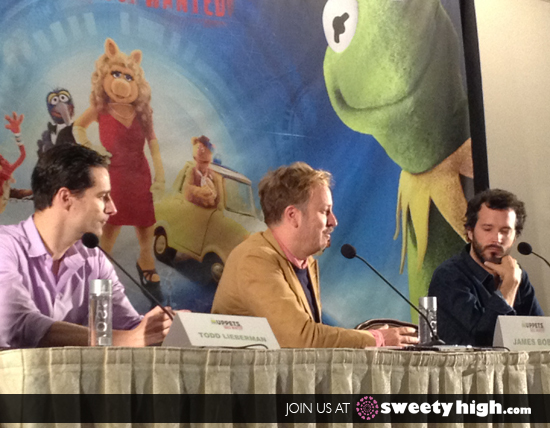 Our reporter from Sweety High asked McKenzie and Bobin how closely they worked together to craft songs to fit perfectly with the tone of the storyline.

"Very closely," Bobin said. "We've worked together for maybe 10 years now, so it's a joy working with Bret because I have an idea and he's ahead of me the whole time. It's very much a back and forth."

He explained that he'll usually begin with just a title or funny idea for a song, and put a placeholder in the script.

"That's all it is," he said. "It's a title, and a kind of brief description. And then from that paragraph I give it to Bret, and Bret will come back with this amazing song. I'll go, yeah that's it, perfect thank you very much, let's do something else now. it's that good. It's very rare that you did something I didn't like."

"They had some ideas of they had some good lines," McKenzie said. "They often suggest lines that don't rhyme, which is  not that helpful."

"We're doing a sequel. It costs twice as much but it's half as good," Bobin said.

McKenzie said that it can be a challenge to combine the idea for the song into something that makes sense for the script but will also stand alone.

"I play it back for them, usually just on piano with me singing, doing my now quite extensive catalog of muppet impressions," McKenzie said. "I can do Miss Piggy quite well."

He impressed the audience with a line of his Miss Piggy impression from the track "Something So Right," which Piggy sings alongside Céline Dion in the film. You can hear five of his demos on the Muppets Most Wanted soundtrack, releasing March 18!

"Some of them you can't even tell" Lieberman said of McKenzie's Muppet impressions.

"The Muppets can tell," quipped McKenzie

McKenzie added that sometimes his visual ideas for what needs to accompany the song will make it into the movie. One such moment was during the "Something So Right" scene.

"I had this idea and I was working on, what if we had this sort of dreamy moment where Piggy's thinking about her future and she sees her with Kermit growing old and she pulls out, basically I thought it would be fun, to have a little pink frog and a little green pig," McKenzie explained. "I love those moments where the song idea and the video comes back, because I'm not on set and I don't see them doing it, and James manages to lift the song higher with the video."

Once the filmmakers were finished with their portion of the press conference, out came the stars of the film. Tiny Fey, Kermit the Frog, Ricky Gervais, Constantine, Ty Burrel, and Sam Eagle were on the panel. Later, Sam had to leave and was replaced by the fashionably late Miss Piggy!

One reporter asked Kermit why he didn't decide to play his own role as well as that of his Russian doppelgänger, Constantine!

"Well it didn't make sense for me to play Constantine because we do have a few scenes together, and I don't really work on green screen," he joked.

We also learned that Constantine is a distant cousin of Kermit's from Russia, and though he has a strong Russian accent Constantine can't speak a work of Russian!

The stars took time to speak about the musical numbers in the film and their own varying levels of singing ability. 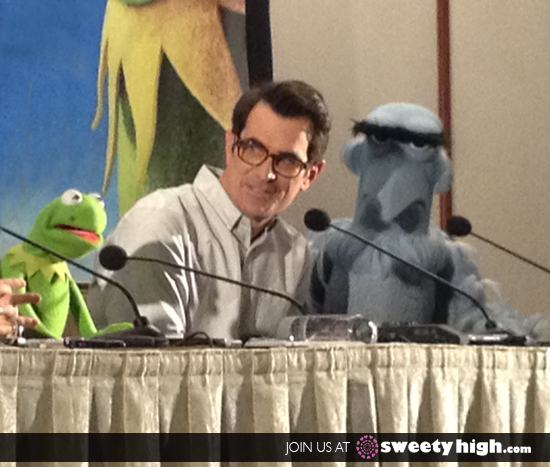 "America and the world was spared my singing voice except for two notes," Ty Burell said. "I don't know if you noticed that, I think it was by design. I spoke my song but I was thrilled to do it."

"You're selling yourself short," Sam Eagle butted in. "You're a great singer, a great actor and a great American."

In the film, Kermit's evil counterpart Constantine takes Kermit's place in the Muppet show. One journalist wondered if he was thinking of leaving a life of evil behind to take up show business.

"I am actually thinking of doing new Netflix original programming," Constatine said. "I will call it House Of Toads. I will executive produce and show run."

And while Constantine really is a villain at heart, Ricky Gervais spoke about the fun of pretending to be a villain in the movies.

Miss Piggy was also excited to discuss sharing the screen and a song with superstar Céline Dion.

"Working with Céline Dion, it was a pleasure. It was a joy, for her, naturally," Piggy said. "I'm only too happy to let her ride my coattails up to the Oscar stage."

We had an absolute blast covering the Muppets Most Wanted press conference! For even more Muppets coverage, join us at SweetyHigh.com and stay tuned for even more with the Muppets later this week!