Myra Sky is a singer-songwriter who first found fame after appearing on The Voice, and his since released her first EP and toured with Bridgit Mendler! 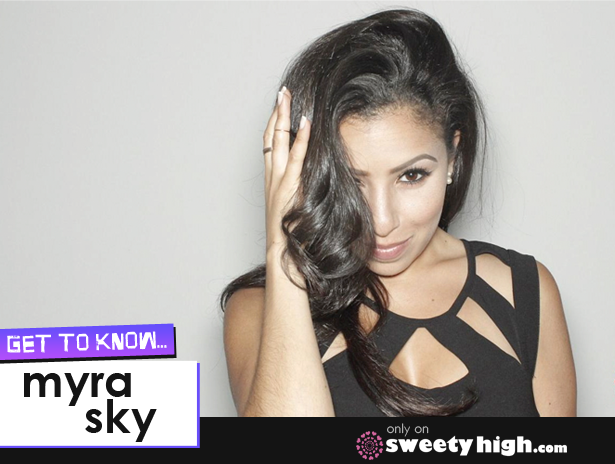 We recently spoke with Myra to discuss her biggest inspirations as a musician, her favorite causes and much, much more!

Myra Sky grew up in a pretty strict household, having a big impact on her musical career later in life.

"It really taught me how to be able to be more conservative," Myra explained. "I definitely learned how to appreciate music for what it is."

Myra learned to value music based on quality, rather than the image and cool factor associated with musical artists.

"It showed me to respect myself and my body and my music a lot more," she said. "It has a really big influence with what I sing and how I dress."

Growing up, Mariah Carey was one of Myra's biggest musical influences.

"The biggest thing to me is that she was the only artist at the time my mother and father allowed me to listen to," Myra said. "That's the biggest reason I connected to her. But she never gave up, she always worked hard and she has such an incredible voice."

And although Myra believes that, over time, Mariah Carey began to focus too much on her image, Myra has continued to be inspired by her work ethic.

"Mariah always stuck to her music, with writing and always being involved," she said. "She's not a lazy person, and I respect that about her. She takes her music and her songs very very seriously. She's always there, always involved and that's the way I want to be."

Myra worked on her music all her life, but she was first exposed to audiences across the country after she appeared on season 3 of The Voice. The event was a propelling force in Myra's career.

"It was amazing," she said. "I had never been around so many extremely talented people. NBC really took good care of us and it was just a great experience."

Most of all, the event taught Myra the caliber of talent she would have to compete with in the music industry.

"I had to figure out how I was going to continue to make it and preservere through this business," she said. "That was the question I needed to ask myself and I figured it out after that experience. The only way I'm going to make it and continue to grow and expand my career is by outworking everyone."

From there, she set out to do just that.

In 2013, Myra released her first-ever EP License II Love. It was another landmark in her career.

"It was a dream come true," she said. "I've been working in this business for so long and chasing this dream for quite a bit, but to finally have something tangible and something physical that I can look at was a blessing. I've felt so confident about it and I feel like it's just a great first chapter for me."

One of the songs on the EP is a track called "Hurricane." She released a musical video for the song earlier this year.

While it was incredible to have her music in front of an audience, the song itself was inspired by a difficult time.

Through all of her success, Myra Sky has built an avid following on social media. Her fans are called "Skylights."

"My fans made the name," she explained. "I have a really great fan base on Twitter that are just so loyal and so awesome. I love them so much."

Myra gets as involved as she can with her fans, responding to what they have to say and asking them for their ideas.

"They're my inspiration," she said. "That's what keeps me going. They know that I'm always telling them to reach for the sky. I let them choose a name and 'Skylights' is what they chose."'

She is also involved with a number of organizations that are important to her.

For one, Myra has been closely involved with Girls On the Run, especially at home in Tennessee.

"They're a nationwide organization encouraging girls to exercise and to build each others' confidence up, and they teach young women to believe in themselves instead of getting too caught up in everything else in life," she said.

Throughout the program, girls are encouraged to exercise and train as they build the confidence and endurance to run a 5K.

"That's what life's about," she said. "You're going to go through ups and downs especially as young girls, but Girls On the Run lets girls let go of what's not important and encourage each other to get through all those mountains we go through as girls."

She's also a big supporter of the American Heart Association because of her own personal experiences.

"My father is much older, and my parents had me a little bit later in life, because that was part of the culture in Egypt," Myra explained. "He went through a very critical quadruple bypass surgery during the time when I was doing The Voice."

While her father's surgery made her time away from him during The Voice even more difficult, she persevered because she wanted to make him proud.

"I was so scared because I didn't know if I was going to lose him," she said. "I'm trying to make it to the Grammys and bring him there. There are all these things that I want to do and I want to make sure his health is good so he can be a part of that."

Myra's relationship with her father is one of the reasons she's so passionate about her work with the AHA.

"The American Heart Association is running a campaign that encourages children to get their families involved with exercising," she explained. "We're going to help bring awareness to taking care of our loved ones."

Myra also does what she can to set a positive body image example for her fans. While she loves many of the female artists who are big in the music business today, she doesn't always think they set the best example for young girls.

"I'm a little bit more mature of a woman so I don't necessarily follow the pressure that I have to show my skin to be accepted," she said. "But at 11, 12, 13, girls don't see that.

She plans to use any recognition she gains in the media to be someone girls might look up to.

"I have a voice to be heard and I'd like to continue to grow and get bigger," she said. "Girls look up to who they see on TV and hear on the radio, and I hope girls look up to me. I want to make sure that if I'm going to be in that type of light, I want to inspire them and lead them to love themselves and love their bodies."

She urged girls not to cave into peer pressure to become someone they're not.

"You don't have to feel the pressure," she said. "I will always try to be someone to look up to and I'm not going to change and get crazy. As an artist when you have that type of attention you should take advantage of it."

"That doesn't need to happen," she said. "But it happens because girls don't have many images to look up to in the entertainment business right now. I want to be that light for them."

As Myra's influence grows, she hopes to have a positive impact on the lives of even more young girls.

"I think we're going to focus on putting out another album and getting ready to do another tour, hopefully," she said. "It'll be even bigger this time. I also wanted to grab the second leg of Katy Perry's tour, but we'll see what happens!"

To keep up with all of the latest from Myra Sky, be sure to follow her on her social pages, listed below! You can also join us at SweetyHigh.com to tell us about your own musical journeys and much more!